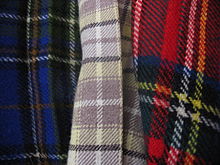 A tartan is a weave pattern for fabrics that is often used in modern times to represent belonging to a Scottish clan . The typical tartans plaid ( tartan or plaid ) produced during weaving by using different colored threads. Today, tartans are mainly used for kilts , plaids and other Scottish garments, which are usually made from worsted yarn .

The oldest tartans were found in China (hats for jade figures) and could be dated to around 3500 BC. To be dated. Tartans and tartan-like patterns have been in use in Scotland for many centuries. The oldest find is the Falkirk Sett from the 3rd century AD, a two-tone patterned piece of fabric that was used as a stopper for a clay vessel with Roman coins.

Originally, tartans and their patterns in Scotland were mainly regional and it was not uncommon to wear several tartans with different patterns. The clear assignment of certain tartans to individual clans did not begin until the 16th century. The first official regiment with a uniform tartan became the Black Watch Regiment in 1739 .

The tartan of a Scottish clan is a special sequence of colors and shades that can only be worn by members of the clan. Although a tartan visibly expresses membership of a clan, it is not an offense under Scottish coat of arms law to wear the tartan of another clan. Wearing a tartan is generally accepted if one is considered to be a member of the clan by relatives, by adoption or even by name.

The registration of official clan tartans began on April 8, 1815, when the Highland Society of London (founded in 1778) requested all clan chiefs to send the society a piece of their tartan, large enough to reveal the pattern.

Today, the Scottish Register of Tartans , run by an agency of the Scottish Government, is responsible for the official registration of old and newly designed designs. Anyone can register a design for a fee of £ 70.

In addition to clan tartans, there are tartans reserved for members of the Highland regiments of Great Britain and the Commonwealth . People in connection with the English royal family use the Royal Stewart tartan , regardless of whether they belong to the Clan Stewart . This tradition goes back to James VI. back from Scotland .

The use of tartans is not limited to clan membership and the military area. There are also tartans for professional groups, clubs, cities, regions and organizations such as Amnesty International . Another variant of the tartan are the house checks of British clothing manufacturers and men's outfitters such as Burberry or Barbour .

Also of Punks pants, jackets, arm or collars and other garments with tartan pattern are often worn. The connection between flannel shirts and tartan patterns in the grunge scene , as worn by Kurt Cobain , is also known.

Again, the tartan pattern is a popular design for Christmas wrapping paper and bows in the UK.