Lawrence Edward Grace Oates (born March 17, 1880 in Putney , London , † March 17, 1912 , Ross Ice Shelf , Antarctica ) was a British polar explorer . He was a member of the expedition team of the Terra Nova Expedition , which, under the direction of Robert Falcon Scott , reached the South Pole in 1912 , but found that it had just been beaten by the Norwegian Roald Amundsen in the race for Austria . All five members of the group died on the strenuous return journey through the interior of the Antarctic. Oates was the second to die on the way back. When his health deteriorated dramatically, he left the tent on his 32nd birthday with his famous final words “I am just going outside and may be some time.” (“I'm just going out and could take a little longer”) and never was seen again. These words, which Scott recorded in his diary, which was later found, made Oates a memorial to the typical English upper-class hero who courageously sacrificed himself for his comrades.

Oates was born to a wealthy family, but his modesty and reserved manner made him popular among his acquaintances. He first attended Eton College before he was sent to Eastbourne due to illness to continue studying there. Since he did not pass the entrance exam for military service, he first enrolled in the 3rd West Yorkshire Regiment (founded in 1759) in 1898. In 1900 he was accepted as a regular dragoons in the 6th Regiment of the Inniskilling Forces of the British Army . With this he took part in the Boer War in South Africa in March 1901 . Oates refused to back away with his men when they were ambushed. His message was: “We came here to fight, not to surrender.” (We came here to fight, not to give up). They managed to push back the Boers, but Oates was injured by a shot in the thigh. This wound later resulted in a shortened leg. This injury later caused him severe pain due to the cold Antarctica. However, this didn't stop him from pursuing his favorite pastimes, hunting, running or boxing. When he heard about Robert Falcon Scott's plan in 1909, who was still looking for team members for his expedition, he applied and was accepted. 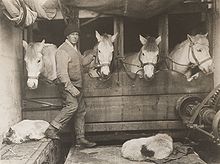 The expedition started in 1910. During the crossing he was a cadet on the Terra Nova , the ship that was supposed to bring them to their starting point. Since he had proven to be a useful helper in dealing with the ponies during this time, Scott quickly selected him as one of the members of the five-man team that was to reach the South Pole from base camp. However, Oates did not have the experience that the other team members brought with them. He also didn't tell Scott that his old war wound was hindering him. There were several conflicts between Oates and Scott over questions about the expedition leadership, and he noted in his diary: “Myself, I dislike Scott intensely and would chuck the whole thing if it were not that we are a British expedition… [Scott] is not straight, it is himself first, the rest nowhere…. ”(“ I don't like Scott at all and would give up the whole thing if we weren't a British expedition… [Scott] is not honest, he always comes first and he Rest nowhere ... ")

On the way back from the South Pole, the team was very quickly confronted with extremely bad weather conditions. The group was also soon starving. At high altitudes, around 2,900 meters, they used more energy pulling sleds than was in their daily rations. It is already clear from the photos that show the group at the South Pole that they were already suffering from a certain emaciation. Oates in particular looks very exhausted and demoralized. However, the first fatality after a mental and physical breakdown on the march back was Edgar Evans . Soon after, Oates became a burden for the others. His physical condition deteriorated so rapidly that he massively hindered the team's progress. He had both feet frozen and was only able to pull with pain. The remaining three did not want to leave him behind, though, although it was evident that Oates' health had reached a point where recovery was no longer possible and their own chances of survival diminished significantly with every hour Oates held them. Oates, who had unsuccessfully spoken out in favor of taking a revolver before the expedition began, asked for morphine several times but was not given a dose large enough to end his life. Like the others, he hoped to be rescued by the sled dog team that was to come towards them. But the dogs didn't come because Scott's instructions were too vague before the march to the pole. Finally, he asked his colleagues for practical advice on how to end his life. He was advised to just go as far as he could. With the famous words quoted at the beginning, "I'll only go out briefly and could take a little longer", he left the tent in a snow storm to die in the cold. Of course the others knew he was going to die, but they couldn't hold him back. They let him go and later found no trace of him. His death did not help Scott or the other two team members. They died shortly before the next food depot in a blizzard that held them up for several days. Ironically, if Scott had followed Oates' earlier advice to locate the food depot further south, at latitude 80, the team might have survived.

This expedition was recreated in the 1948 film Scott's Last Voyage (with Derek Bond as Oates) and in 1985 in the British television series The Last Place on Earth (with Richard Morant as Oates). Between 2010 and 2011 the documentary series The Race to the South Pole was made .

In 2015 the Australian band We Lost The Sea Oates dedicated the song "A Gallant Gentleman".