Map of Antarctica with the South Pole

Geographical South Pole, the US flag on the left, a memorial plaque in the middle, the pole on the right in the picture marks the polar axis 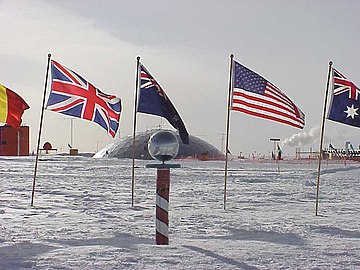 Ceremonial South Pole, surrounded by the flags of the signatory states of the Antarctic Treaty System

The new Amundsen-Scott South Pole Station (aerial photo 2005). The geographic South Pole is marked out with flags in the background. 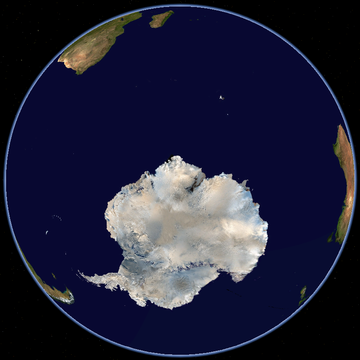 The geographic south pole is determined by the rotation of the earth. It is located on the south end of the Earth's axis as antipode of the north pole and has a fixed position at a latitude of 90 ° 0 '0 "  S coordinates: 90 ° 0' 0"  S . According to the geographical definition of the compass direction, one looks from here in every direction to the north. The South Pole does not have a clear longitude. It is located on the mainland of the subcontinent East Antarctica under the eternal ice, which at this point extends to a height of 2800 meters above sea ​​level . -90 0

Amundsen's competitor in the race to reach the South Pole for the first time was the Englishman Robert Falcon Scott . He and his crew ( Henry Robertson Bowers , Edward Adrian Wilson , Lawrence Oates , Edgar Evans ) reached the Pole a month after Amundsen's group on January 17, 1912. On the return trip from the Pole, Scott and his four companions died of the extreme cold and of Malnutrition.

During the first Byrd Antarctic Expedition (1928 to 1930), the pilot Berndt Balchen was the first person to fly over the South Pole on November 29, 1929. On board were Harold June as co-pilot, Richard Evelyn Byrd as navigator, and Ashley McKinley as radio operator.

According to Amundsen and Scott, it took almost 45 years for another human to set foot on the South Pole. On October 31, 1956, Rear Admiral George J. Dufek and an expedition group of the US Navy reached the southernmost point on earth in a military aircraft ( Douglas DC-3 / R4D ). They were given the task of preparing the construction of the Amundsen-Scott South Pole Station . In the course of the following months and 1957, the station was built by transporting materials, workers, scientists and researchers to the South Pole by air. Since then, the station has been in continuous use for Antarctic research.

It was not until 1958 that the South Pole was reached again by land for the first time since 1912. As part of the Commonwealth Trans-Antarctic Expedition , the New Zealander Edmund Hillary and his companion reached the South Pole on January 4, 1958 and a group around the Englishman Vivian Fuchs on January 19, 1958. Hillary started on the Ross Sea and Fuchs on the Weddell Sea . In addition to dog teams, both groups also used caterpillar vehicles on their journey and were supported by aerial reconnaissance to plan the route and the locations for the depots.

In the Antarctic summer of 1989/1990, Arved Fuchs and Reinhold Messner crossed the Antarctic on foot over the South Pole, running a distance of 2,800 km. On November 13, 1989, he started with his companion. On the morning of December 31, 1989, both adventurers reached the geographic South Pole. On February 12, 1990, Arved Fuchs and Reinhold Messner arrived at Scott Base in McMurdo Sound and ended their crossing of the Antarctic on foot and on skis. In 1989, Fuchs became the first person to reach both poles on foot within just one year.

On December 21, 2008, the American Todd Carmichael reached the geographic South Pole from the west coast of the Southern Ocean alone on skis and unaided in 39 days and just under eight hours. In doing so, he undercut the existing trekking record of the Briton Hannah McKeand for the approximately 1,100-kilometer route, but only by a little more than an hour and a half.

From December 16 to 26, 2013, as part of a “challenge” against a Spaniard and an American , the Briton Maria Leijerstam overcame the 800-kilometer route from a Russian station to the South Pole in a new record time of just 10 days. In doing so, however, she did not run on skis, but used a recumbent tricycle that had been converted by the manufacturer on the basis of a standard model for the extreme climatic and geographical conditions. In addition to having the fastest time on land, she is the first person to ever reach the South Pole on a bicycle .

Much of the daylight that reaches the surface is reflected by the white snow . This lack of heat from the sun, as well as the high altitude (around 3000 meters) mean that the South Pole has one of the coldest climates on earth. Even compared to the North Pole, the temperatures are much lower. In addition to the altitude, this is also due to the fact that the South Pole is located in the middle of a continental land mass, while the North Pole is located in an ocean that stores heat.

In midsummer , when the sun reaches its maximum height of around 23.5 ° above the horizon, temperatures at the South Pole rise to an average of −25 ° C. In winter the temperature remains constant at around -65 ° C. The highest temperature ever recorded at the Amundsen-Scott South Pole Station is -12 ° C, the lowest was -83 ° C. The lowest temperature ever recorded in Antarctica was measured on July 21, 1983 at the Vostok station and was −89 ° C. In 2018 the cold record was broken at -98.6 ° C. On the coasts and especially on the Antarctic Peninsula , the temperature in summer can rise a little above 0 ° C.

The geomagnetic pole on the southern hemisphere is a calculated pole of the irregular geomagnetic field under the assumption of an undisturbed magnetic field, as would result from a bar magnet located in the center of the earth. In 2010, it was about 80 ° 1 ′  S , 107 ° 47 ′  E , near Vostok Station , East Antarctica . Like the magnetic pole, this is also a magnetic north pole in the physical sense. -80.02 107.79

The south pole of inaccessibility

No time zones are defined in Antarctica . For practical reasons, New Zealand time is used at the American Amundsen-Scott South Pole Station , as the logistical hub of American Antarctic activities is in Christchurch , New Zealand.

If one were to continue the ideal time zones defined by longitudes to the South Pole, it would be possible to traverse all time zones in just a few steps by walking around the geographic South Pole. Researcher Bob Reid also set his “fun world record” in the boomerang throwing discipline MTA-100: He threw his boomerang in such a way that it circled through all time zones at the South Pole. In this way he was able to add the time values ​​of the time zones to the throwing time and achieved 24 hours and 11 seconds of flight time. However, what Bob Reid did not actually have to do is to draw the date line along the 180th degree of longitude to the South Pole, which would nullify the 24 hours gained by jumping back one day if the pole was completely circumnavigated.