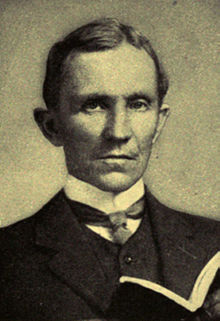 In 1882 Tannatt William Edgeworth David emigrated to Australia to take up a position as a geodesist for the Geological Survey of New South Wales ; This was followed by a professorship in geology at the University of Sydney from 1891 to 1924. But David's real obsession was field research, so in 1897 he took part in an expedition to the Funafuti Atoll, where he investigated the formation of coral reef formations in the Pacific .

In 1886 he discovered the coal fields in the Hunter Valley in New South Wales .

Between 1907 and 1909 he took part in the Nimrod expedition led by Ernest Henry Shackleton . In the course of this mission, a group, including David, succeeded in making the first ascent of Mount Erebus in 1908 . In 1909 he played a major role in the localization of the magnetic south pole .

Back in Australia, David wrote over 150 textbooks, the most important of which are "Geographical Notes of the British Antarctic Expedition" (1909) and "The Geology of Australia" (1932). A posthumous work on the geology of Australia was published by William Rowan Browne in 1950, considerably completed.

David was accepted as a member (" Fellow ") in the Royal Society in 1900 . In 1910 he became Companion of the Order of St. Michael and St. George . In 1920 he was knighted ( Knight Commander of the Order of the British Empire ). The Royal Society of New South Wales awarded him the Clarke Medal in 1917 . In 1934 the Commonwealth and the Länder honored him jointly with a state funeral. After David of are David Cauldron , the David Glacier , David Iceland and the David Range named, which all fall in the Antarctic are.