This article is about a Norwegian king. For the passenger ship of the same name, see Haakon VII (ship) . There was a super tanker called Kong Haakon VII from 1969–1983. 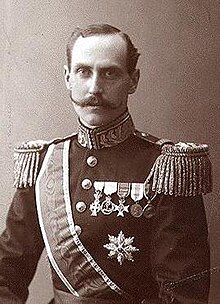 Haakon VII - born Prince Christian Frederik Carl Georg Valdemar Axel of Denmark and Iceland - (born August 3, 1872 in Charlottenlund Palace , Gentofte ; † September 21, 1957 in the Royal Palace , Oslo ) was a Danish prince from the House of Schleswig-Holstein -Sonderburg-Glücksburg . In 1905 he accepted the election to King of Norway as Haakon VII and held the office until his death in 1957. After the occupation of Norway by the German Wehrmacht in 1940, he fled into exile, where he became a symbol of national resistance against the German occupation.

Haakon is the progenitor of the current Norwegian royal family . 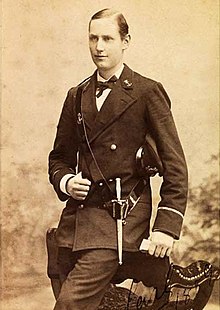 Prince Carl of Denmark was born on August 3, 1872 as the second of eight descendants of the Danish Crown Prince Friedrich (from 1906 Friedrich VIII.) And his wife Louise of Sweden-Norway at Charlottenlund Palace . On his father's side, he was a grandson of the ruling Danish King Christian IX. , on the mother's side of the Swedish King Charles XV. and was third in line to the Danish throne behind his father and older brother Prince Christian .

On September 7, 1872, he was baptized by the primate of the Danish People's Church , Bishop Hans Lassen Martensen , in Charlottenlund in the name of Christian Frederik Carl Georg Valdemar Axel .

Carl spent his childhood at the castles Amalienborg and Charlottenlund. The crown prince's descendants received a Christian-dominated private education, which was characterized by severity, the fulfillment of duties, diligence and order. As a later-born prince with little prospect of the Danish royal dignity, Carl should embark on a career as an officer in the Navy and after his confirmation in 1886 he trained at the Royal Naval Academy in Copenhagen ( Søværnets Officersskole ). He graduated from this in 1893 with the rank of lieutenant and then served in the Royal Danish Navy .

On July 22, 1896, Carl married his cousin, Princess Maud of Wales , the youngest daughter of the British Crown Prince Albert Eduard (from 1901 Edward VII) and his wife Alexandra of Denmark in the chapel of Buckingham Palace .

The marriage produced a son:

Haakon and Maud in their coronation regalia , 1906

After the previous termination by the Storting (Norwegian Parliament) on June 7, 1905, the Norwegian people voted in a referendum on August 13 for the dissolution of the Swedish-Norwegian state union, which had existed since 1814 . With the mediation of the major European powers, the union was formally dissolved in the Treaty of Karlstad on September 23, 1905. Its provisions included the full recognition of Norway's independence and the abdication of the Swedish King Oskar II from the Norwegian throne.

Even during the dissolution negotiations, Carl von Denmark became the most promising candidate for the vacant Norwegian royal throne. Carl was a descendant of both the Danish royal family, whose pedigree could be traced back to the family of Harald I (852 to 933), and of the Swedish royal family Bernadotte . Due to his marriage to Princess Maud, it was expected that Britain would be benevolent to the candidacy. In order to take account of the strong republican currents in the public debate about the form of government, the democratically-minded Carl declared himself ready to accept the Norwegian royal dignity, should this correspond to the wishes of the population. Therefore, it was first decided to hold a referendum on the future form of government. In this referendum of 12./13. November 1905, 79 percent of the men eligible to vote voted for the introduction of a constitutional monarchy (259,563 to 69,264 votes), which is why the Storting unanimously elected Prince Carl as king on November 18. After the approval of his grandfather Christian IX. Carl accepted the election on the same day and chose the old Norwegian royal name Haakon VII for himself; he named his son Olav.

On board the state yacht Dannebrog , Haakon and his family left Copenhagen on November 23, 1905, boarded the Norwegian Heimdal in Oscarsborg two days later and finally reached the port of Christiania , where he was received by Prime Minister Christian Michelsen . Before the Storting, the monarch took the oath on the constitution on November 27th and announced his motto “Alt for Norge” (Everything for Norway) . Haakon VII was the first king of an independent Norway in 518 years.

On June 22, 1906, Haakon and Maud were anointed and solemnly crowned by Bishop Vilhelm Andreas Wexelsen in Trondheim's Nidaros Cathedral . As a result of the deletion of the coronation paragraph from the constitution in 1908, this was the last coronation of a Norwegian monarch.

Haakon endeavored to redefine the role of the royal family in egalitarian Norway and to find a balance between the unconventional Norwegian manners and the monarchy's need for representation. He accepted his role as a constitutional monarch and was always loyal to political decisions, which contributed significantly to consolidating the young monarchy in society.

The royal couple got to know the country through extensive travels in their first years of government and were very close to the people and relaxed in their dealings, which won them great sympathy from broad sections of the population. With his tactful and discreet lifestyle, the monarch acted as a unifying symbol of national unity and Haakon was nicknamed "Folkekongen" (People's King) .

After the outbreak of World War I , the government declared Norway neutral. The king supported the neutrality policy through his participation in the Epiphany on December 18, 1914 in Malmö, Sweden . In a joint declaration, the three Scandinavian monarchs Gustav V of Sweden , Christian X of Denmark and Haakon VII affirmed the strict neutrality of their states during the war.

In 1929 the king entrusted the victorious socialist workers' party with the formation of a government and thus confirmed Norway's first socialist government with the famous words: "I am also the king of the communists."

Queen Maud died of a weak heart on November 20, 1938, after which Haakon was no longer married.

Haakon and Olav during the war

After the outbreak of World War II in September 1939, Norway continued its policy of neutrality from the First World War in order to be able to keep the country out of the conflict again. Notwithstanding the declarations of neutrality, the German Wehrmacht occupied Denmark on April 9, 1940 and attacked Norway without prior declaration of war ( Operation Weser Exercise ). The royal family, the government and numerous members of the Storting were able to evade the attack of the German invaders and move from Oslo to the small town of Elverum . There the Storting authorized Haakon VII and the government to govern the country for the duration of the war without a parliament ( Elverumsfullmakta ). At a meeting on April 10th, Haakon responded to the German ambassador Curt Bräuer's ultimate demand for an immediate cessation of military resistance and the appointment of fascist leader Vidkun Quisling as prime minister with a clear refusal. Then, for the first time since 1905, the king expressed his own opinion at a meeting of the State Council before hearing that of his government: he had adhered to the Norwegian constitution since 1905. Should the legal government decide to surrender to the Germans because of the difficult situation and to respond to their demands, he would understand this, but see no choice but to abdicate. Thereupon the cabinet rejected the German demands and announced in a nationwide radio address that it wanted to continue the resistance as long as possible. Haakon's consistent stance in those days subsequently formed the basis for the Norwegian resistance struggle against the National Socialist German Reich .

In response to the rejection of the demands, the German air force bombed the village of Nybergsund , the whereabouts of the king, crown prince and government, on April 11th . However, they managed to escape north: via Molde they finally reached Tromsø in early May , which was declared the provisional capital. After the German attack in Western Europe , the Western powers withdrew their troops from embattled Norway, whose army finally capitulated on June 10, 1940 . On June 7, Haakon, Crown Prince Olav, the government and numerous diplomats on board the British cruiser HMS Devonshire were evacuated from Tromsø into exile in London . There Johan Nygaardsvold formed a government in exile that continued the resistance.

The German Reich Commissioner for Occupied Norway , Josef Terboven , attempted to reorganize Norway politically in accordance with the German Empire. He denied legitimacy to both Haakon and the government-in-exile by trying to persuade the Storting to call on the king to abdicate. Under German pressure, the Storting asked Haakon to resign in a letter on June 27, 1940, which Haakon refused in a radio address on July 8th via BBC World Service . As a result, Haakon finally became the most important symbol of the willingness of the Norwegian people to fight for a free and independent Norway. The king's radio speeches reinforced its symbolic power and thus gave the resistance movement legitimacy. The "H7" monogram served as a silent sign of resistance and solidarity with the monarch. 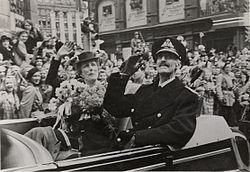 Reception of Haakons after his return in 1945, Crown Princess Märtha to his left

The war years were the most politically active in Haakon's reign. He maintained contact with the British royal family , chaired weekly cabinet meetings and inspected Norwegian troops in exile who were continuing the fight alongside Britain. His British adjutant was Herbrand Charles Alexander , son of the Earl of Caledon . In exile, Haakon had an unusual friendship with the controversial resistance fighter Johannes Sigfred Andersen .

On May 23, 1941, the king donated the war cross, the highest-ranking award in Norway.

Carbisdale Castle was made available as a residence to the King by a wealthy Scottish businessman of Norwegian descent . There it was agreed at the Carbisdale Conference on June 22, 1941 that Soviet troops should, should they occupy Norwegian territory, vacate it again after the end of the war, which actually happened. The puppet government under Vidkun Quisling installed by the German occupation forces on February 1, 1942, did not recognize Haakon VII.

After the end of World War II in Europe , Haakon returned to his liberated homeland on June 7, 1945, exactly five years after his escape, aboard the British cruiser HMS Norfolk . In the port of Oslo , the king was greeted enthusiastically by a cheering crowd.

The political tasks that Haakon had taken on in the resistance, he did not continue after his return and limited himself to his constitutional duties as head of state. In the late summer of 1945 he went on an extensive tour to examine the war damage and to give consolation to the population. Due to his role during the war and his personal integrity , Haakon VII was considered the highest moral authority in the country and enjoyed great esteem in all classes of the population.

To thank the king for his services during the war, the Norwegian people acquired the British motor yacht Philante on the occasion of his upcoming 75th birthday as part of a large-scale foundation and donation campaign . This was given to Haakon in 1948 as K / S Norge as a royal yacht and is still available to the royal family to this day.

In a fall in June 1955, the now 82-year-old Haakon suffered a thigh fracture and from then on was dependent on a wheelchair. Deprived of his personal mobility, he subsequently withdrew completely from the public and was represented by Crown Prince Olav.

Haakon VII died on September 21, 1957 in the Royal Castle of Oslo . With great sympathy from the population, he was buried on October 1st in the mausoleum of Akershus Fortress , next to his wife Maud, who died in 1938. The funeral procession was led by Olav V and Crown Prince Harald , and the monarchs Gustav VI. Adolf of Sweden , Frederik IX. of Denmark , Baudouin of Belgium and Paul of Greece and Henry of Gloucester as representative of the House of Windsor. 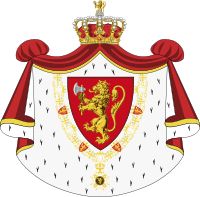