A puppet government (or puppet state ) is a government that was set up by a foreign superpower and is supported and controlled by it.

The term refers to a puppet called dummy form , the movements of a player with the help of threads controlled. This term is derogatory and is therefore used only by critics of such governments. Similar terms are vassal or satellite states . A head of government in a puppet government is sometimes referred to as a quisling .

The influence on the seizure of power and the degree of control by the foreign power varies. It is often difficult to make a clear distinction as to whether a regime is a puppet government or just maintains “good relationships” with the hegemonic power .

In the course of history, great powers have repeatedly installed puppet governments when it appeared politically opportune, often after an occupation or partial occupation of a country. Examples are the Egyptian rule over Nubia (until approx. 1000 BC), the Roman tetrachia in Judea and the Batavian Republic , which was dependent on the First French Republic.

France created satellite states during the coalition wars, of which the democratically governed are referred to as daughter republics . 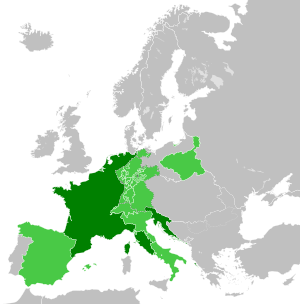 France and its satellite states around 1812

Countries under the direct control of Napoleon and Napoleon III.

Satellite states on the territory of the former Holy Roman Empire

The German Empire successfully pushed the army of the Russian Tsarist Empire far back to the East during World War I and created numerous puppet governments in Eastern Europe:

Many puppet regimes were set up by the Axis powers during World War II , including:

Used after the Cold War