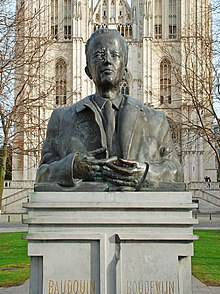 Statue of King Baudouin in front of the Brussels Cathedral

After the abdication of his father Leopold III. Baudouin succeeded him on July 16, 1951 as Belgian king. 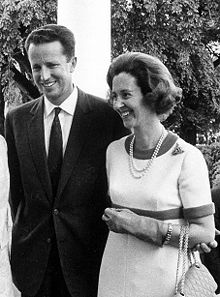 King Baudouin's grave in the Church of Our Lady (Laeken)

After the Allies landed in 1944, the royal family was initially deported by the Germans to Hirschstein in Saxony and then to Strobl in Austria in March 1945 . On May 7, 1945 it was liberated by US troops and King Leopold III. was confronted by the Belgian public with allegations that he had surrendered too early in the war against the Germans. He was therefore initially unable to return to Belgium . The king's brother, Prince Charles of Belgium , therefore perceived the reign on the grounds that his brother was "in the impossibility to rule".

Since no political solution could be found to the controversy surrounding the king, there was a referendum for or against the return of the king. The electorate's response was a majority of 58% in its favor, with wide regional differences. The king returned to Brussels on July 22, 1950. But after serious unrest, especially by Walloon workers, Leopold III thanked. and proposed that his royal powers be transferred to his son Prince Baudouin. On July 17, 1951, he took his oath on the constitution and became the fifth king of the Belgians.

On the occasion of his 25th jubilee on the throne in 1976, the King Baudouin Foundation was set up, which aims to improve the living conditions of the Belgian population.

Because his Catholic faith spoke against it, Baudouin refused in 1990 to sign a law to liberalize the abortion law. The Belgian government therefore declared Baudouin incapable of governing on April 4, 1990 at his own request . In this case, the Belgian Constitution stipulates that the entire government takes on the role of head of state . After all members of the government had signed the law, the next day, April 5, 1990, the government declared Baudouin to be eligible to govern again.

Baudouin ruled for 42 years until his death on July 31, 1993, when he died of heart failure in Villa Astrida in Motril , southern Spain. The mourning for the death of the “only Belgian” was deeply felt by the population across all language barriers. Baudouin was buried in the royal crypt in the Church of Our Lady in Laeken , Belgium. Since he had no children, Baudoin's brother Albert succeeded him.

A commission of the Belgian Parliament convened in 2002 examined the events surrounding the assassination of the first Congolese Prime Minister Patrice Lumumba (* July 2, 1925, † January 17, 1961). The Democratic Republic of the Congo was granted independence on June 30, 1960. In its final report, the commission found that King Baudouin knew of the plans to assassinate Lumumba. What is certain is that the Belgian government supported the Lumumba hostile forces in the Congo logistically, financially and militarily. Much of the blame is directly attributed to King Baudouin, who is said to have pursued his own post-colonial policy by bypassing political authorities.

King Baudouin married the Spanish noblewoman Fabiola Mora y Aragón (born June 11, 1928 in Madrid , † December 5, 2014 in Brussels ), a former nurse and children's book author , on December 15, 1960 . The marriage remained childless, as all of the queen's pregnancies resulted in stillbirths .