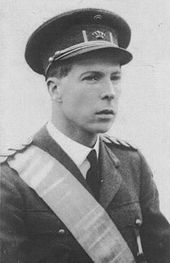 Prince Karl of Belgium , full name Charles Théodore Henri Antoine Meinrad (born October 10, 1903 in Brussels , † June 1, 1983 in Ostend ) from the House of Saxe-Coburg and Gotha was the second son of the Belgian King Albert I and from 1944 until 1950 Prince Regent of the Belgians.

Karl was the second son of the Belgian King Albert I and his wife Elisabeth in Bavaria . He had two siblings; Leopold , who after the death of his father as Leopold III. ascended the Belgian throne, and Princess Marie José , the last Queen of Italy. On January 31, 1910, he was awarded the title of Count of Flanders .

Due to the outbreak of the First World War , Karl was brought to England in 1914 with his younger sister Marie José , where he lived in the house of the British statesman George Curzon . He did not return to Belgium until the end of the war. At the age of 18, Karl joined the Belgian army . He led a rather withdrawn life and spent a few years in the USA .

The behavior of King Leopold III. During the Second World War and the Nazi occupation, as well as his marriage to Mary Lilian Baels , the king had to go into exile in 1945. The interim government authorized Karl, who had joined the resistance during the war and had lived undetected on a farm near Spa , to rule the Kingdom of Belgium as Prince Regent .

The reconstruction of the country fell largely into his reign. With the help of the Marshall Plan , the Belgian economy could be revived and Karl had a share in the establishment of the Benelux . During his time, Belgium also joined NATO and the UN . The introduction of women's suffrage in the parliamentary elections of 1948 is also important.

His reign ended in 1950 when the king returned from exile in Switzerland. The return caused tension in Belgium again and so in 1951 Leopold was forced to abdicate in favor of his son Baudouin . Karl withdrew from public life, lived in Ostend and devoted himself to art. He had a special passion for painting, which he also did himself and which he drew with “Karel van Vlaanderen”. He mainly painted landscapes.

In 1983 Karl fell seriously ill and died on June 1, 1983 in Ostend. He was buried in the royal crypt of the Liebfrauenkirche in Laeken / Laken .