The county emerged from the old Roman pagus Flandrensis , which had belonged to the West Franconian Empire since the Frankish division of Verdun in 843 . Probably in the year 864, the West Franconian King Charles the Bald entrusted his son-in-law Baldwin I. Eisenarm with the pagus from which the county of Flanders developed in the course of the Middle Ages. The county belonged to France through the Middle Ages until it was ceded to the Holy Roman Empire in 1525 . In 1801 the historic province of Flanders was again assigned to France, and in 1815 to the United Kingdom of the Netherlands . It has belonged to the Kingdom of Belgium since 1830 . 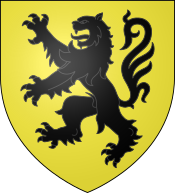 The coat of arms of Flanders.

from 1506 see governor of the Habsburg Netherlands

Flanders from 1797 to the present day

Modern use of the graph title

Today the Count of Flanders ( Comte de Flandre or Graaf van Vlaanderen ) is a title of nobility in the Kingdom of Belgium, which refers to the historical county of Flanders. The title has so far been awarded twice to members of the Belgian royal family.

The title of Count of Flanders was ascribed ad personam and was not hereditary (royal decrees of 1840, 1891 and 1910). This title was assigned to the second son of the king.

The title has not been awarded since 1983.