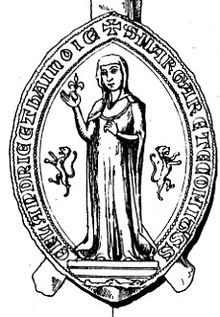 Seal of Margaret II, Countess of Flanders and Hainaut

Margaret was the younger daughter of Emperor Baldwin I of Constantinople and his wife Marie de Champagne . Before Margaret was born, Emperor Baldwin I, who was also Balduin IX. Count of Flanders and as Baldwin VI. Count von Hennegau had set out on the Fourth Crusade and founded the Latin Empire in 1204 . Margarete and her older sister Johanna were orphans with the death of their parents in 1204/05 and grew up under the tutelage of their uncle Philip of Namur .

Margarete married Burkhard von Avesnes , a nobleman from Hainaut in 1212 . This marriage was questioned and fought after the (to this extent amicable) marriage by the older sister Johanna. Pope Innocent III criticized the marriage, but did not annul it, as Johanna wanted. Burchard, with whom Margarete had two sons, Johann von Avesnes and Balduin, was imprisoned in this context from 1219 to 1221 and only released again on condition that Margarete separated. Under the influence of her older sister, she married Wilhelm II of Dampierre . From this marriage she had two sons, Count Wilhelm II of Flanders and Guido I of Flanders .

This second marriage without the completion of the separation of the first caused a sensation as bigamy , since essential inheritance lines depended on the legitimacy of their children. When she appointed her son Wilhelm as co-regent of Flanders and designated sole heir of Hainaut and Flanders in 1246, the dispute with her son Johann from her first marriage escalated. King Louis IX of France determined as arbitrator in 1246 that the children of Avesnes should receive the county of Hainaut and the descendants of the relationship with William of Dampierre the county of Flanders. Since Margarete Johann did not participate in the government in Hainaut, like Wilhelm did in Flanders, the dispute escalated again in 1251. Johann won the support of his brother-in-law, Count Wilhelm von Holland . By this Guido was finally defeated in the battle of Westkapelle , whereupon Margarete was forced to leave the county of Hainaut to her son Johann. Margarete's attempts to sell the county of Hainaut to Charles of Anjou instead ended in vain. When Johann died in 1257, his son, Margarete's grandson Johann , was still a minor. Margarete managed to regain ownership of the county of Hainaut, which she only left to that Johann after her death.

Margarete was buried in Flines Abbey after her death .

Her children from her first marriage with Burkhard von Avesnes were:

Her children from her second marriage to Wilhelm II von Dampierre were: