Guido von Flanders (* around 1226; † March 7, 1305 in Compiègne ) from the House of Dampierre was the ruling Count of Flanders at the time of the Spore Battle .

Guido was the second son of Countess Margaret II of Flanders from her relationship with Wilhelm II of Dampierre . After the death of his older brother Wilhelm in a tournament in 1251, Guido and his mother became ruler of Flanders. Together with her he had to fight against his mother's descendants from her first marriage from the Avesnes family . In the War of Succession of Flanders and Hainaut he was captured after the lost battle of Westkapelle in 1253. Through the mediation of King Ludwig IX. he was released from France in 1256.

In 1263 he reacquired the county of Namur , which had previously been linked, for Flanders . In 1270 he took part in the Seventh Crusade .

Guido's struggle for the independence of Flanders 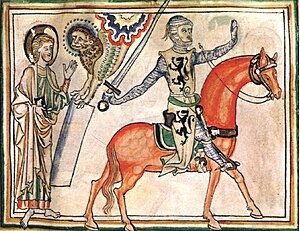 Ludwig's successor, King Philip the Fair of France , who had ruled since 1285, based his influence in Flanders mainly on the patricians in the cities. Although these established their economic and political strength through their cloth trade with England, they were anxious to have good relations with the king, who accepted their trade privileges with England and protected them from a strong count. Count Guido now strove to restore his dignity as a count to its old, almost sovereign position and to free himself from royal influence.

In King Edward I of England he found an ally against Philip IV, as his interests were of a similar nature. In 1294, Count Guido established close diplomatic relations with Eduard and betrothed one of his daughters to the Prince of Wales . As expected, Philipp refused the necessary consent, and Guido had to swear lasting loyalty, nevertheless continued his policy and won the German King Adolf von Nassau in Grammont in December 1296 , who wanted to prevent France from growing stronger in the Lorraine-Dutch area, and other imperial princes for him his thing. After Philip asked the count to explain these acts, he terminated his vassal relationship with France on January 20, 1297. The king then called a pair court, which condemned the count for high treason and felony and withdrew his fiefdom. In addition, Philip obtained the ban on Count Guido and the interdict over Flanders from the Pope .

Philip tackled the military fight against the anti-French alliance with determination. Count Robert II of Artois led an army to Flanders, with which he was able to take one city after another, including Kortrijk , Dunkirk , Bergen and Bruges . These quick successes were favored by the patricians who were positively minded for France and the refusal to support Count Guido from the German king, who, after paying French gold and due to papal pressure, renounced war despite his alliance with Flanders and England.

On August 20, 1297 there was a battle near Veurne (Furnes) , in which the French, led by Robert von Artois, were victorious over the Flemish army. After the royal troops had taken Lille on August 26, 1297 , Count Guido, who could only stay in Ghent , was ready to enter into an armistice, which was concluded under papal mediation on October 9 in Vyve-Saint-Bavon and in 1298 in Tournai was extended by two years.

After the armistice expired in 1300, Guido gave up the fight. A year earlier, his only real ally, Count Heinrich III. von Bar , captured, and Edward I was reconciled with France after Philip lifted the occupation of Guyenne, which his brother Karl von Valois had succeeded in a few years earlier. A continuation of the fight was hopeless for the count under these circumstances. Despite Charles of Valois's word of honor for safe conduct, Guido and his eldest son Robert von Béthune were imprisoned in knightly custody at the meeting with the king, Guido in Compiègne , Robert in Bourges . Flanders was entrusted to the administration of royal governors. Philip appeared personally in Flanders in 1301, where he dissolved the sea blockade of Ghent by Edward I of England and built new fortresses. In a treaty signed in Bruges in 1301, the new rulers were determined.

Despite this success, the crown quickly lost its reputation and support among the Flemish population. The decisive factor here was Philip's rigid financial policy, who, despite the end of the war, did not want to abolish the war tax levied. This upset the craftsmen who had been socially disadvantaged for a long time and attacked some houses of the wealthy patricians and cloth merchants. Then the governor Jacques de Châtillon had the cities of Bruges and Ghent provided with an occupation. However, on the morning of May 18, 1302, the citizens of Bruges broke into the quarters of the royal soldiers and probably killed several hundred of them.

The uprising took hold of all Flemish cities that rallied behind John I of Namur and Guido of Namur , two of Guido's younger sons. Philip responded by sending an army under Robert von Artois. Contrary to expectations, the French knights were defeated by the Flemish bourgeois army on July 11, 1302 in the Spore Battle of Kortrijk (Coutrai), in which more than seven hundred knights lost their lives, including the entire military leadership of France, including Robert von Artois and Jacques de Châtillon.

After the spore battle, Guido was released for a short time to negotiate the settlement. In this respect, there was another war with France and the destruction of the Flemish fleet in 1304. Guido was again taken prisoner by France, where he died in Compiègne in 1305. His body was transferred to Flanders and buried in the Abbey of Flines-lez-Raches.

With sixteen children from two marriages, Guido I of Flanders had a large number of offspring by medieval standards. Since 1246 he was married to Mathilde de Béthune († 1264), daughter and heiress of Sire Robert VII. De Béthune († 1248). Your children were: