This article explains Treaty 1526, for other treaties see Treaty of Madrid . 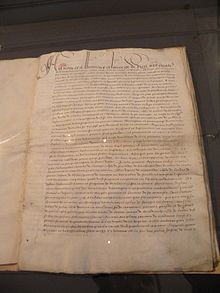 The Peace of Madrid of January 14, 1526 between the Habsburg Charles V and King Francis I of France was a stage in the Italian Wars . The captive Franz was forced to cede the Duchy of Milan , Flanders , Artois and Burgundy to Charles. After his release he immediately revoked the concession as forced and took up the fight with Habsburg again.

This was preceded by the catastrophic battle of Pavia on February 24, 1525, in which the Duke Louis de la Tremouille, Marshal Odet de Foix , Admiral Bonnivet , Jacques de la Palice , Richard de la Pole and others were not just a series of high-ranking people French generals had fallen, but the king himself had been taken prisoner - the last such fate was Louis IX. happened during the crusades. Anne de Montmorency and Robert III were also captured . de La Marck . The remnants of the defeated French army withdrew across the Alps to France. However, even financially Karl was hardly able to lead a longer campaign and instead tried to diplomatically exploit the victory over Franz. The Duke of Bourbon , who had rebelled against Franz and defected to Karl, played an important role in Karl's plans . Charles encouraged him to go with King Henry VIII of England against France, which could then be divided among them. His general Pescara , meanwhile, had hopes for Naples, but he died that same year. In France, meanwhile, Franz's mother Luise of Savoy exercised the power of government, who succeeded in dissuading Henry VIII from his alliance with Habsburg.

Franz himself was brought to Spain. On June 12, 1525, he arrived in Barcelona , was first detained in a house near Valencia and finally taken to the citadel of Madrid . Karl let Franz, whose request for a personal interview he refused, request that Milan, Provence and the Burgundian property be surrendered. Franz replied that he was not authorized to do so without Parliament's approval. Franz's attempt to escape failed and was answered by Karl by suddenly sending his sister Margarete von Navarra , who had arrived as a negotiator, back home.

At the end of 1525 Charles was confronted with the demand to restore the rule of the Sforza in Milan . Venice and the Pope in particular campaigned for this and Karl soon had to reckon with another war in Italy, so that he had to quickly come to an agreement with Franz. Charles now agreed to renounce Provence, so that on December 19, Franz finally agreed to the Treaty of Madrid, which was signed on January 14, 1526.

Franz ceded Burgundy, the Artois and the Duchy of Milan; at the same time it was agreed that in return for his release he had to give two sons hostage to Spain and that he should marry Eleanor of Austria . In addition, the Duke of Bourbon was to be reinstated in his French possessions. The exchange took place on March 18 at Bidasoa on the border with France. The two princes were handed over to the Spanish by Louise and Lautrec, and Franz returned to his homeland.

Immediately after his return, however, Franz declared the peace conditions to be enforced and therefore null and void. For this he not only received the backing of the Pope, who, in view of the power of Charles V, became his opponent; Charles 'Chancellor Mercurino Arborio di Gattinara also disagreed with Charles' approach. In addition, Franz was able to present a notarized protest letter he had already written on August 16, 1525, in which he had any concessions made under pressure declared as ineffective as a precautionary measure. Karl now saw himself isolated in public opinion. France, Milan, Venice, Florence and the Papal States came together in the League of Cognac and as early as May 1526 the Italian wars flared up again. In 1527 there was a sad climax with the Sacco di Roma , the sack of Rome by German mercenaries.

A typical episode of the peace ( called the Treaty of Madrid on the German side ) was the journalistically cannibalized challenge of Charles V to Francis I in 1528. Although a personal duel was not rejected by the two rulers, the diplomatic imponderables that went with it only brought about another moment of early modern conflict resolution.