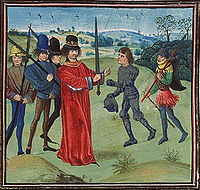 King Charles the Bald enfeoffed Baldwin Eisenarm with the county of Flanders. Representation from the 15th century.

In the year 862 Baldwin kidnapped the Carolingian princess Judith in Senlis , a daughter of the West Frankish king and later Roman emperor Charles the Bald . She was also the widow of the Anglo-Saxon kings Æthelwulf († 858) and Æthelbald († 860). The king tried to banish his daughter and her kidnapper from the Frankish bishops, whereupon Archbishop Hinkmar von Reims and Bishop Hungerus von Utrecht warned the Viking prince Rörik von Dorestad against granting Baldwin asylum. However, the following year the king was reconciled with the couple after they had received the consent of Pope Nicholas I to marry, which was concluded in Auxerre in December 863 . It was around this time that Baldwin was appointed by his father-in-law as comes in the pagus Flandrensis and in the pagus Teruanensis , as well as being appointed lay abbot of the St. Peter monastery in Ghent , as he is named in a document from the year 870. In his role as border count he was particularly responsible for the defense of the country against the Rörik Vikings who ruled Friesland. In the year 871 Baldwin tried in vain on behalf of his father-in-law to persuade the rebellious king's son Karlmann to make peace.

Count Baldwin I of Flanders died in the year 879. The place of his burial is disputed; both the Saint-Bertin Abbey and the Saint-Peters-Abbey in Ghent are mentioned in the annals . However, the abbot Folkwin later stated that Baldwin had spent the last days of his life as a monk in Saint-Bertin, where he was also buried. His heart, on the other hand, was given a place of rest in Sankt Peter.

From his marriage to Judith († after 870) Baldwin had at least two sons:

Other children occasionally appearing in literature, especially a son who died young, named Karl and a daughter who would have married Count Wilfried the Hairy of Barcelona , come from reports that were written later, the correctness of which cannot be determined.

Balduin's family origins as well as his year of birth are unknown, contemporary sources are silent on this. A genealogy of the Counts of Flanders, begun in the early 12th century, constructs a fictitious family tree, according to which Baldwin was the descendant of a Lidricus , comes (count) in the pagus Harlebeccensis . His son Ingelramnus would have been the father of Audacrus , who in turn was the father of Baldwin. The father's name is also used in different variations in several recent annals. A continuation of the Flemish genealogy, which emerged in the same century, reports that the comes Lidricus seized power in abandoned Flanders in 792 because this land was so densely wooded.

An expansion of the genealogy that took place in 1294 mentions Baldwin I as the first Count of Flanders, but his ancestors would have served the Frankish kings as forestarii (forest rangers) in Flanders. Lidricus and Audacer received a hunting license from the abbot of the St. Bavo monastery in Ghent. The legend of the ancestors of the Counts of Flanders who guarded the forests has become firmly established in historical memory over the centuries that Count Baldwin "Eisenarm" cleared the forests of Flanders from roaming polar bears .

Balduin's nickname, which is common today, is not contemporary, on the occasion of his death he was called Bonus (“the good”) and Ferreus (“the iron”). The nickname Ferreorum-brachiorum ("arm of iron") was first given to him in a work from the 12th century and describes his strength and audacity.