The Sankt-Peters-Abbey (ndl. Sint-Pietersabdij ) is a former Benedictine abbey in Ghent , the capital of the province of East Flanders in the Kingdom of Belgium. The monastery is located on an old arm of the Scheldt on the Blandinberg ( ndl . : Blandijnberg ), a hill which, at 28 m, is the highest point in Ghent. 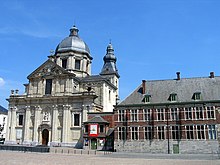 On a hill called Blandinium , the monk Amandus founded a monastery in the 7th century during the reign of the Frankish King Dagobert , from which the Benedictine Abbey of Saint Peter (Latin: S. Petri Blandiniensis coenobium ) later emerged. Over the years, the monastery was able to increase its possessions through all kinds of donations. Charlemagne is said to have had the Blandinium monastery restored shortly before his death. Karl's secretary and architect Einhard was appointed lay abbot there by his son and successor Ludwig the Pious . Wine is said to have been grown there on the southern slope of the Blandinberg as early as 815. Around 870, Baldwinus Ferreus (Baldwin with the iron arm), first Count of Flanders (837 / 40–879), acquired the monastery. His son, Baldwin the Bald (879–918), second Count of Flanders, according to the monastery chronicle, died on the hill and was also buried there. Like all monasteries in Flanders, St. Peter also suffered from the Viking raids. Around 960 Count Arnulf the Great had the monastery restored at great expense and shortly afterwards (964) was also laid to rest here. A total of five Flemish counts are said to have been buried here over the Middle Ages, which is why the place has a special meaning in the history of Flanders. Because of its importance, a real monastery village ( Sint-Pietersdorp ) developed around the monastery . Iconoclasm then hit the monastery during the Reformation. After French troops marched in, the monastery was dissolved in 1796. The cultivation of white grapes, which was practiced on the southern slope of the hill, down to the Scheldt , was forbidden by Napoleon , probably to protect the French winegrowers from unpleasant competition. The monks did not return after the occupation ended. The monastery church was used from now on by the neighboring parish, as their church Onze-Lieve-Vrouw was demolished in 1799. The former monastery church has therefore been given the double name Onze-Lieve-Vrouw-Sint-Pieterskerk ever since . The monastery building itself served secular purposes. The abbey is now used as a museum and exhibition space, and vines can be seen again on the sunlit southern slope. At the confluence of the Schelde and Leie , not far from the first monastery, Amandus founded another monastery called "Ganda" (today the abbey of St. Bavo: Sint-Baafsabdij ). Aldawin or Allowin von Haspengau , allegedly a son of Pippin von Landen and then brother of Begga and Gertrudis, entered the first monastery of Armandus and took the name Bavo. After his death, his remains were taken to the second monastery, which has been named after him since the 9th century.

The dome of the church

The Carolingian buildings were largely replaced by those in the Romanesque style in the 12th to 13th centuries . Between 1629 and 1651 a baroque-style church made of sandstone was built, and further alterations in the 18th century gave the complex its present-day appearance. At the beginning of November 1796 the last monks were expelled and the monastery buildings were converted into barracks. The buildings were later used as a prison, which was only closed in 1948. Today, as already mentioned, the former monastery is used as a space for exhibitions.

Document of Ludwig the Pious from the period 814 to 819, in which he grants immunity to the "monasterium Ganda" at the request of Einhard.

Page from the Codex Blandiniensis

During the Middle Ages, various manuscripts and documents were created in the writing room of the monastery, such as:

Dunstan , Archbishop of Canterbury, spent his exile at St Peter's Monastery in Ghent before returning to England in 957. The letters of Wido Blandiniensis and a Uita Dunstani Cantuarensis , written by Adalardus Blandiniensis, have survived.