Kingdom of the United Netherlands 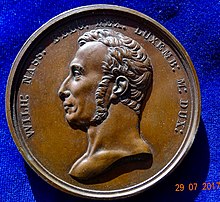 Wilhelm I in March 1815 as King of the Belgians and Grand Duke of Luxembourg on a bronze medal from Michaut , obverse.

On the reverse of this medal for the unification of the Netherlands, Belgium and Holland shake hands.

The French departments that made up the kingdom in 1811

The enlargement of the "old" Netherlands (the Republic of the Seven United Provinces) was intended to create a viable state north of France that would counterbalance any future French expansion attempts. The plans of the powers allied against Napoleon Bonaparte met the intentions and ambitions of the Prince of Orange to expand the Netherlands. The way for this was cleared by the Austrian Empire when the Austrian State Chancellor Klemens von Metternich declared in the negotiations leading to the Treaty of Chaumont of March 1, 1814 that Austria would forego the restoration of the Austrian Netherlands after the end of the war against Napoleon. In secret additional articles to the Chaumont Treaty, an "enlargement" of the Netherlands was agreed. On July 21, 1814, the Netherlands signed identical treaties with the United Kingdom, Austria, Prussia and Russia, which gave the Netherlands the “Belgian provinces”. These agreements were confirmed at the Congress of Vienna . On May 31, 1815, the Netherlands signed a corresponding treaty with the United Kingdom, Austria, Prussia and Russia. Its provisions were also included in the final act of the Congress of June 9, 1815. Since the decisions had already been made in 1814, Wilhelm I was able to be proclaimed “King of the United Netherlands” on March 16, 1815, before the end of the Congress of Vienna.

The Kingdom of the United Netherlands existed until the southern provinces separated in the Belgian Revolution of 1830 to create the state of Belgium . Belgian independence was not recognized by the north until 1839. After that, the northern states called themselves just the Kingdom of the Netherlands .

Luxembourg existed as an independent Grand Duchy from 1815 and was therefore not part of the Kingdom of the United Netherlands. However, it was ruled from 1815 to 1890 by the Dutch king, who was the grand duke of sovereign Luxembourg in personal union . He was also the German Federal Prince, as was the then British King for the State of Hanover (until 1837) and the Danish King for the Duchy of Holstein .

The personal union between the Netherlands and Luxembourg expired in 1890: after the death of King Wilhelm III. Wilhelmina succeeded him to the Dutch throne under the reign of her mother. In Luxembourg, on the other hand, the former Nassau Duke Adolf I became the new Grand Duke due to the Salian inheritance law applicable there , applying the provisions of the Nassau Hereditary Association .

From 1839, the Dutch province of Limburg also belonged to the German Confederation as the newly founded Duchy of Limburg (1839–1866) and was linked to Luxembourg by personal union.

According to the Fundemental Law of August 24, 1815, the Kingdom of the United Netherlands was divided into 17 provinces. The provincial borders were largely identical to the borders of the former departments of Napoleonic France , which in turn were mainly based on the former provincial divisions of the Republic of the Seven United Provinces and the Austrian Netherlands .

The States General consisted of two chambers. The first chamber consisted of a minimum of 40 and a maximum of 60 people who were appointed by the king on merit for life. The provinces were represented in the second chamber, which consisted of 110 members.