King Wilhelm I of the Netherlands

Wilhelm Friedrich was born in 1772 as the son of the inheritance holder of the Republic of the Seven United Provinces , Wilhelm V of Orange and Wilhelmine , the daughter of Prince August Wilhelm of Prussia .

In 1792 the first coalition war with France began. The non-warlike Wilhelm V did not head the Dutch army, but his son Wilhelm. Wilhelm led 16,000 men to the coalition army in Flanders. From April 17th to 30th, 1794, he besieged the Landrecies fortress (built by Vauban ), which was defended by 7,000 French soldiers under General Henri Victor Roulland. Roulland surrendered on April 30th after the fortress was shelled for three days.
In the spring of 1794, Wilhelm was entrusted with the defense of the Sambre against Jean-Baptiste Jourdan . At first he succeeded. After the defeat in the Battle of Fleurus on June 26, 1794, the coalition troops had to withdraw. Wilhelm finally left the demoralized troops and fled to England with his father from The Hague in January 1795.

On August 29, 1802, his father ceded the compensation he had been awarded in Germany, the principality of Fulda, newly created for this purpose, together with Corvey , Dortmund and some other areas. After that he stayed mostly in Fulda, where the "Haus Oranien" (Evangelical Community Center) commemorates his almost four-year reign: in 1803 he founded the Evangelical Community in Fulda. After secularization , the University of Fulda was dissolved by Wilhelm Friedrich in 1805 and an academic lyceum and grammar school was founded instead , which was a humanistic grammar school from 1835.

In 1806 he was given command of a Prussian division. After the battle of Jena, he surrendered on October 15 with 10,000 men in Erfurt . Napoléon Bonaparte declared him forfeit of his lands, so that only his private estates in Poznan and Silesia remained. Probably from 1807 he had a relationship with Julie von der Goltz, a daughter of Karl Franz von der Goltz . Four children had emerged from her by 1812.

In 1809 he joined the army of Archduke Karl von Österreich-Teschen as a volunteer , where he took part in the battle of Wagram . He then went to England and landed in Scheveningen on November 30th, when the people rose against French rule when the Prussians invaded Holland in November 1813 .

The Congress of Vienna decided to become a kingdom and on March 30, 1814, he was enthroned under the name Willem I in the Nieuwe Kerk in Amsterdam as the Sovereign Prince of the Netherlands; his formal predecessor Louis Bonaparte , Napoleon's brother, had only been King of Holland . The Netherlands became a kingdom in 1815 ( Congress of Vienna ) as a constitutional monarchy ; the dynasty of the previous governors, the House of Orange , ascended the throne for the first time with William I as the new king. (Only the governor William III of Orange had ever ascended a royal throne, albeit the English one.) His kingdom of the United Netherlands had consisted since 1815 of the countries that today form the Netherlands and Belgium; in addition there was Luxembourg , of which William was Grand Duke . Willem had to cede his hereditary lands in Germany to Nassau and Prussia for Luxembourg, which was incorporated into the German Confederation on July 22, 1815 and which he had elevated to the Grand Duchy in May .

Thanks to the diplomatic skill of his representative Hans von Gagern , the region of what is now Belgium was added to the Netherlands at the Congress of Vienna in 1815 . The predominantly Catholic population there was not asked about this. She rejected the Protestant supremacy of the "Dutch". The relentless policies of King Wilhelm I exacerbated tensions: the monarch had higher taxes levied in the southern provinces, censored the Catholic press and staffed the main administrative offices mainly from the northern part of the country. The state attempts to remove the school system from the influence of the Catholic Church and to enforce Dutch as the language of courts and authorities in some provinces contributed to further discontent. The Belgian struggle for independence began with a performance in the Brussels Opera House on August 25, 1830 . The play La muette de Portici was performed in the building. It was about an Italian rebellion in Naples against Spanish domination in the 17th century. The audience was inspired by the performance and carried revolutionary slogans onto the streets of Brussels by singing the Marseillaise. Craftsmen had also gathered in the squares of Brussels to watch an originally planned fireworks display in honor of Wilhelm I's birthday. Encouraged by the crowd streaming out of the opera house, however, they erect barricades, following the example of Paris . A short time later, vigilante groups sided with the rebels. King Wilhelm I initially strictly refused to make concessions to the rebels. He wanted to stifle the protest in the south with armed force. In September 1830, however, his troops were thrown back: many of the advancing soldiers refused to take action against their own countrymen. The Dutch units deployed were mostly inexperienced militarily and unsuitable for barricade fighting. On September 27, 1830, the admiral of the Dutch troops gave up fighting in Brussels. The revolution then spread to Antwerp. The shelling of the city by Dutch artillery only fueled the resistance of the residents. On September 26, 1830, a provisional government was formed in Brussels, which on October 4 proclaimed Belgian independence from the Kingdom of the Netherlands.

His persistence in trying to re-conquer Belgium made the peace of 1839 financially unfavorable for the Netherlands. The dissatisfaction that his refusal to undertake the required reforms had caused in the States General for a long time was so heightened by his relationship with Countess Henriëtte d'Oultremont de Wégimont , whom he intended to marry, that on October 7, 1840, he was in favor of his eldest son of Wilhelm II abdicated . He accepted the title of King Wilhelm Friedrich Graf von Nassau and went with his great fortune to the Dutch Palace in Berlin . He married the Countess d'Oultremont there on February 17, 1841 and died on December 12, 1843. 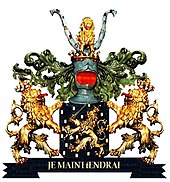 Coat of arms of Wilhelm I.