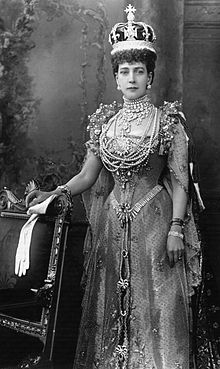 Alexandra Caroline Marie Charlotte Louise Julia of Denmark VA (born December 1, 1844 in Copenhagen ; †  November 20, 1925 in Sandringham House , Norfolk ) was from 1901 to 1910 as the wife of Edward VII. Queen Consort of the United Kingdom and the Dominions and Empress Consort of India . After her husband's death in 1910 she became Queen Mother ( Queen Mother ).

Alexandra , called "Alix", was the eldest daughter of Prince Christian of Schleswig-Holstein-Sonderburg-Glücksburg , who later became King Christian IX. of Denmark , and his wife Louise of Hesse .

Princesses Alexandra and Dagmar of Denmark, 1856 by Elisabeth Jerichau-Baumann

Through her father, the “father-in-law of Europe”, she was related to many royal courts in Europe. Her father and her older brother Friedrich became King of Denmark, her younger brother Wilhelm became King of Greece and her younger sister Dagmar became Tsarina of Russia . The young princess had a happy, yet humble childhood. From clothing to living style, everything was kept as simple as possible. Alexandra received an education that corresponded to the time. It included languages, history, courtly conversation, drawing, dancing and horse riding. Even then she had a very close relationship with her younger sister Dagmar. The two sisters were instructed in swimming by the Swedish swimming pioneer Nancy Edberg. They shared a room and often sewed their own clothes.

In 1856 the well-known Danish artist Elisabeth Jerichau-Baumann (1819–1881) even came to the royal court. She portrayed the then eleven year old Alexandra with eight year old Dagmar. 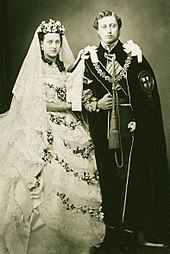 The Prince of Wales Albert Edward, known as "Bertie", was still unmarried after the death of his father and his now widowed mother Queen Victoria was seriously worried about the succession to the throne. She was looking for a suitable bride for her son. As a result, she invited Alexandra of Denmark to live with her in London . The princess came to London, unusual at the time, almost entirely alone. The queen was very impressed by the young princess and to her relief the heir to the throne agreed.

The marriage of the two took place on March 10, 1863 at St George's Chapel in Windsor Castle , eight months before their father ascended the throne of Denmark. Alexandra became the Princess of Wales and would hold this courtesy title until January 22, 1901.

The couple moved to Sandringham House in the County of Norfolk , where it led a mostly happy marriage, although Bertie is not so much care of his wife and children as they would have liked, and had numerous affairs. The Prince and Princess of Wales had six children, but one of them died early:

The death of her eldest son Albert Victor in 1892 came as a shock to Princess Alexandra, she left the room as Albert Victor had left it. Queen Victoria had done the same to her husband's room after his death. Alexandra's daughter Victoria remained unmarried throughout her life. Alexandra was not entirely innocent of this fate, because she always wanted to have one of her daughters close by. 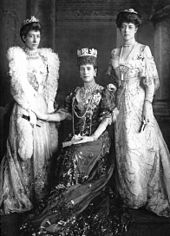 Alexandra between her daughters Louise and Victoria

Edward and Alexandra had a basically happy marriage, but one that was marked by ups and downs. Edward did not give his family the necessary attention, and the couple became estranged over time. Only after a serious illness by Edward around 1870 brought the couple closer together again. However, he had, albeit with Alexandra's knowledge, still several mistresses , including the married Lady Randolph Churchill , mother of Winston Churchill , the actress Lillie Langtry and the Scottish Alice Keppel , great-grandmother of Camilla Parker-Bowles , mistress of Charles, Prince of Wales and later Duchess of Cornwall. The latter even allowed Alexandra to be there on her husband's deathbed, although she didn't like the idea. The frequent appearances of Alice Keppel where Alexandra and Edward also stayed was a thorn in her side, but over time she had learned to tolerate Alice Keppel, if not to accept it. Alexandra had a pretty good relationship with Jennie Churchill despite her role in Edward's life and enjoyed her presence.

Alexandra was very different in nature from the rest of the British royal family. She cared for her children with devotion and was on good terms with her servants. Alexandra was also a passionate dancer and ice skater. This didn't change even after the birth of the first child, which created some tension between her and Queen Victoria . During her third pregnancy, Alexandra fell ill with rheumatism , which left her with a stiff or paralyzed leg, and at the same time a congenital otosclerosis worsened , which led to numbness. This meant that she could no longer pursue her active hobbies. She now used an umbrella as a support. She is said to have cheered up a soldier who was wounded in the hospital during the First World War with the following words: “I also have a stiff leg. See what I can (still) do with it. ”. And she lifted her skirt and lifted her stiff leg over his bedside table. However, her congenital hearing loss worsened over time, making it difficult to communicate with her.

Her beauty and popularity made Alexandra a kind of fashion icon. So their preference for high collars and lush necklaces was soon adopted by the population. Actually, however, she wanted to cover up a larger scar on her neck. She probably contracted this as a child in an accident, with some sources also suspecting a suicide attempt. Alexandra kept her youthful appearance into old age, which was due to large amounts of make-up . An eyewitness said the queen looked “like a paint job”.

Luke Fildes : Portrait of Queen Alexandra with her Dog Facey (1893)

When Bertie succeeded his mother to the throne as Edward VII after her death in 1901 , Alexandra was crowned Queen of Great Britain. She was very popular with the British people, also because of her commitment to numerous charitable associations. With the early death of the king in 1910, her son George became king and she became the queen mother.

Politically she was largely neutral, she was only said to have an aversion to Germans, especially during the First World War . The reasons for this lie in the German-Danish War of 1864 over Schleswig-Holstein .

Alexandra died on November 20, 1925, a few days before her 81st birthday, in her Sandringham home and was buried in Windsor . Tens of thousands said goodbye to the popular Queen during the funeral procession through London.

The in London Borough of Haringey preferred Alexandra Palace , one Leisure park The People's Palace was named after her.