View from the opera house to Amalienborg Palace: on the left the Palais Schack, in the middle of the picture the marble church , on the right the Palais Brockdorff

The Amalienborg Palace ( Danish : Amalienborg Slot [ aˈmæːˀljənbɒːˀw ]) is the Copenhagen city ​​residence of the Danish Queen Margrethe II. The palace is still owned by the Danish royal family, the presence of the Queen is symbolized by her standard . If the royal family is present, the changing of the guards in front of the palace takes place every day at 12 noon .

The palace ensemble is formed by four individual palaces around an octagonal square. The houses were originally built as the center of a new neighborhood for various Danish noble families and over time came into the possession of the royal family. The Palais Levetzau houses a museum, the Palais Moltke can be visited on guided tours.

History of the palace complex

At the place of today's residence was originally a by Friedrich III. Pleasure palace built between 1669 and 1673 for Sophie Amalie von Braunschweig-Lüneburg . The king died in 1670 and did not see the completion of the building, Sophie Amalie, after whose second name the castle was named, lived there until her death in 1685.

On April 19, 1689, a fire broke out in a neighboring theater building, which spread to Amalienborg, destroyed the castle and killed 171 people. Among the dead was composer and organist Johan Lorentz . The building site, which was located within the Copenhagen city walls, then lay relatively fallow for several years. At the beginning of the 18th century, a small pavilion was laid out here in the middle of a French garden under Frederick IV .

Construction of the four city palaces

On the occasion of the 300th anniversary of the House of Oldenburg , Frederik V came up with the plan to expand Copenhagen, which is still influenced by the Middle Ages, and to design a new, baroque district based on the French model. The center of this Frederikstaden on the site of the former Amalienborg was to be an octagonal square surrounded by aristocratic palaces with a line of sight to a central church; the court builder Nicolai Eigtved was appointed as the manager responsible for the project in 1749.

The palace square during the erection of the equestrian statue, drawing from 1768

In order to fill the new district with life, the king offered the building sites to various noble families. On condition that Eigtved's plans were implemented, the builders were guaranteed 40 years of tax relief. Work began in 1750. The first house was the Moltke Palace for Adam Gottlob Moltke in 1754, followed in 1757 by the palace of Countess Schack, who came from Holstein . In 1760 work on the houses of Baron Brockdorff and Count Levetzau was finished. As was customary at the time, the four palaces were only inhabited sporadically, as the aristocratic families owned not only town houses but also large country residences.

In 1794, a devastating fire broke out in the Christiansborg City Palace in Copenhagen , which almost completely destroyed the building and made King Christian VII temporarily homeless. The Moltke family made their palace on Amalienborger Platz available to the king, as they owned large estates on Fyn and did not necessarily have to rely on the town house. Little by little, the royal family acquired the remaining houses and established their residence here. The new building of Christiansborg Palace was then only used for representative purposes and later for the Danish Parliament and the Supreme Court.

Two palaces and a marble church 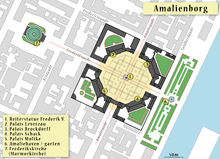 Site plan of the palace complex

The four - externally almost identical - Palais grouped around the Amalie Borger Palace Square, the center of an equestrian statue of Frederick V forms.

All palaces consist of a large, cuboid central building with angled side wings and various auxiliary buildings, which originally served as farm buildings and coach houses . The facades of the houses are adorned with colossal columns and pilasters and are generally regarded as the high point of the Danish Baroque. The Palais Moltke and Schack were connected in the 19th century by a classicist gate, which serves as a representative passage to the Amaliegade. The roof terrace offered the opportunity to get from one palace to the other without having to go across the public square.

The floor plans of the houses were all designed in the same way, but adapted to the different needs of the residents over the past 250 years and are now slightly different in each palace. Caspar Frederik Harsdorff and Christian Frederik Hansen were involved in the renovation work at the end of the 18th century and the beginning of the 19th century .

Behind the palace are small, angular gardens that were originally laid out in the French style .

The Palais Schack, also Palais Christian IX. called, was originally commissioned for the Norwegian nobleman Løvenskiold, but was acquired by Countess Schack in 1754 before it was completed in 1757 . The castle was the residence of Friedrich VI. and Christian IX. who lived here for almost 50 years.

Today this palace is the official Copenhagen residence of Queen Margrethe II. The Palais Schack is preferably used by her as a winter residence, they inhabited mainly property located outside Copenhagen Fredensborg Palace and in the summer a few weeks Schloss Gravenstein near Sønderborg . 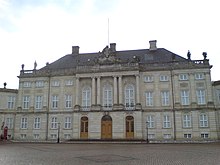 Palais Moltke, also known as Palais Christian VII. , Was ready for occupancy in 1754 and was particularly lavishly furnished by its wealthy first owner. The so-called knight's hall of the palace is considered to be one of the most beautiful Rococo rooms in Denmark. The angular garden behind the palace largely corresponds to the original condition.

After the fire in Christiansborg, the palace served as Christian VII's residence from 1794 . After his death, it was mainly used as a guest house for the royal family, a function it still regularly performs today. The state rooms can be visited on guided tours - provided the royal family is absent and there are no state guests in the house.

Palais Brockdorff, also known as Palais Frederik VIII , was occupied for the first time in 1760 and was acquired by the royal family in 1765, which had a cadet school set up here. It was not until 1828 that the castle was used as a residence and served as a residence for Frederick VIII and later Frederick IX.

The palace housed the city apartment of the queen widow Ingrid , who lived there until her death in 2000. It was renovated in the following years and converted into the official Copenhagen residence of the heir to the throne Frederik and his wife Mary of Denmark .

The Palais Levetzau, also called Palais Christian VIII. , Was ready for occupancy in 1760. It was acquired by the royal family in 1794 - the Levetzau family decreed that the family coat of arms could not be removed - and served Christian VIII and Christian X as a residence. Today the castle houses a museum dedicated to the Danish royal family. The museum holdings, for example the study of the two kings, are supplemented by regularly changing exhibitions. In 2007, for example, a collection of Queen Ingrid's gowns was exhibited here. 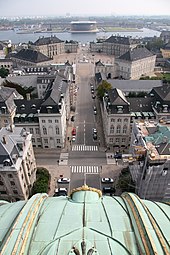 The former city apartment of the heir to the throne Frederik was located above the museum . Today there is the Copenhagen apartment of Joachim and his wife Marie of Denmark .

A straight line of sight led from Schlossplatz to Frederik's Church , the so-called Marble Church , which was planned at the same time as the new part of the city, but was not completed until almost 150 years later. In the same line, on the other side of the harbor basin, is the building of the new Royal Opera, which was inaugurated in 2005 .

The Amaliehave green area is located between the castle area and the harbor , a donation from the shipping company AP Møller to the city of Copenhagen.

There is also a Brockdorff Palais in the Holstein city of Glückstadt .