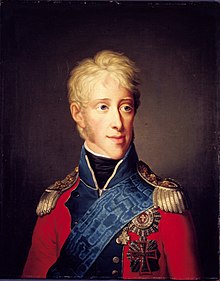 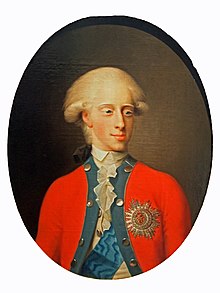 Friedrich's mother, Queen Caroline Mathilde , who came from England and was only sixteen years old when he was born , began a relationship with the doctor Johann Friedrich Struensee in 1770 , who at the time ruled almost alone as the king's confidante. Struensee gained Caroline Mathilde's trust by vaccinating the Crown Prince during a smallpox epidemic, thereby saving his life. He was also likely the father of their daughter Louise Auguste, born in 1771 . Struensee also took care of the education of the Crown Prince in the spirit of Enlightenment .

When Friedrich was four years old, his mother and her lover were arrested and had to leave Denmark. She died in 1775 without seeing her children again, in exile at Celle Castle , which her brother Georg III. made available to her. Friedrich and his sister were brought up at the court of Juliane von Braunschweig-Wolfenbüttel , their father's stepmother, who, due to the mental illness of Friedrich's father Christian VII, was the actual power in Denmark together with the conservative Minister of State Ove Høegh-Guldberg .

In 1784, at the age of sixteen, Frederick was declared of legal age and took power in place of Høegh-Guldberg. From then on, he ruled as Crown Prince Regent on behalf of his father. With the support of Minister of State Andreas Peter Bernstorff , he initiated a series of liberal reforms. Thus, in 1788 in Denmark and 1798 in the duchies of Schleswig and Holstein , the Scholl Tight collar unit lifted the farmers and the serfdom abolished. The entire Danish state experienced a period of peace and economic prosperity under his reign.

After a contemplated marriage with the English cousin Augusta in 1785 failed because her father Georg III. declared that after the terrible treatment of his sister, the mother of the Crown Prince, through whose father he would never send one of his daughters to the Danish court, Friedrich married Marie von Hessen-Kassel in 1790 . Of their eight children, only two daughters survived toddlerhood.

In 1800 Denmark joined an anti-British coalition in the Second Coalition War, which invoked its armed neutrality and declared that it wanted to defend its merchant ships. In order to prevent the unification of the Danish, Russian and Prussian fleets, Great Britain attacked the Danish fleet in the sea ​​battle of Copenhagen in 1801 and inflicted great losses on it.

By 1807, Napoleon conquered mainland Europe except Denmark and Russia and extended the continental barrier to the neutral states. Great Britain tried to force Denmark into a coalition. Crown Prince Friedrich, who was in Holstein at the time, gave the British no answers. At the beginning of September 1807 the British shelled Copenhagen from the seaside, forcing the Danish fleet to be surrendered. The Frauenkirche also burned down . Thereupon Frederick declared war on Great Britain and allied himself with France . He then suspended the Council of State until 1814 and served as Foreign Minister himself.

When Christian VII died on March 13, 1808, the Crown Prince was named Friedrich VI. to the King of Denmark. The following day, broke the war between Denmark and its ally with Britain Sweden of which ended inconclusively in December 1809th A coronation did not take place for the time being, because Friedrich himself had already brought the crown jewels from Rosenborg Castle to the monastery church of Sorø in 1807 for fear of an English attack , where they remained until 1815.

In connection with the peace agreement with Sweden, a marriage of the eldest daughter Caroline with the Swedish Crown Prince Karl August was negotiated. His early death in 1810 ruined this. 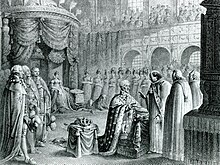 In 1814, during the Napoleonic Wars , when he sided with France, Frederick had to give in to military pressure from Sweden and England and sign the Peace of Kiel , whereby Denmark lost Norway to Sweden, but was able to keep Greenland , Iceland and the Faroe Islands and even for a short time Swedish Pomerania acquired. He exchanged this in 1815 for the Duchy of Lauenburg . As a result, Friedrich saw Denmark's existence threatened and personally traveled to the Congress of Vienna . He could not prevent Denmark's financial ruin. Nevertheless, he was received triumphantly on his return and was anointed on July 31, 1815 in the castle church of Frederiksborg .

In 1831 he had to agree to the formation of four provincial class assemblies.

Friedrich VI. died in 1839 after a total of 55 years in reign as Crown Prince Regent and King. He was buried in Roskilde Cathedral. Since he had no male offspring, his cousin Christian VIII followed him .

The town of Friedrichsgabe , north of Hamburg , bears his name, and the Frederiksgave plantation on the Gold Coast was named after the king.

Friedrich VI. was married to Marie von Hessen-Kassel (1767-1852), who bore him eight children, six of which died in the first year of life. Only two daughters grew up:

Friedrich VI. was also the father of four illegitimate children with his long-time mistress Frederikke Dannemand (1790–1862):

Both through his father and his mother, he descended from the British royal couple George II and his wife Caroline, who thus appear twice as his great parents in the pedigree.