from Wikipedia, the free encyclopedia
This is the spotted version , flagged on March 27, 2020 . There is 1 pending change that has yet to be viewed.

Jacob William Rees-Mogg MP (born May 24, 1969 in Hammersmith , London ) is a British politician . He belongs to the Conservative Party . Since 2010 he has been a member of the House of Commons , where he represents the constituency of North East Somerset . Since July 24, 2019 he has been in the cabinet of Boris Johnson Leader of the House of Commons and Lord President of the Council and advocates a "hard Brexit ".

Rees-Mogg is the son of William Rees-Mogg . His father was long-time editor of the daily newspaper The Times and from 1988 a life peer member of the House of Lords . His sister Annunziata Rees-Mogg is a politician and EU member of the Brexit Party .

In 1997, he was unsuccessful Parliament candidate in Fife ( Scotland ), 2001 in Shropshire . In 2010 he was first elected to the House of Commons in the North East Somerset constituency. He was able to win the constituency again in the following elections in 2015 , 2017 and 2019 . He joined an ultra-conservative parliamentary group, opposed legislative initiatives such as reforming the House of Lords or allowing same-sex marriage, and was best known for his filibuster speeches . At the EU membership referendum in the UK in 2016 , he was one of the most vehement campaign speakers for the exit and drew large audiences.

After the resignation of Prime Minister Theresa May , whose Brexit course he criticized, Rees-Mogg was appointed to the British Cabinet as Lord President of the Council and Leader of the House of Commons by May's successor and Brexit supporter Boris Johnson . It is his first post in the British government. One of his first official acts was the regulation of a new style catalog for the employees of his office, according to which certain words could no longer be used in the future. These include words like got , due to , unacceptable , equal , hopefully , disappointment . Male members of parliament who are not members of the Privy Council should in future be addressed as " Esquire ", and the Anglo-American system of measurement ( imperial units ) should be used instead of the metric system of units . In 2012, Rees-Mogg caused a stir with his rhetoric when he used the word floccinaucinihilipilification (English for contempt) in the course of a debate in the House of Commons .

On the morning of August 28, 2019, Jacob Rees-Mogg traveled to Balmoral Castle in Scotland to ask Queen Elizabeth II on behalf of Boris Johnson for her consent to the suspension (prorogation) of the British Parliament . After an impromptu meeting of her Council of State , represented by three Conservative members led by Rees-Mogg, the Queen gave the Prime Minister her consent to the controversial measure Johnson is taking to prevent Parliament from passing a law against the so-called " hard Brexit" “To enact. Observers rate this trip by Jacob Rees-Mogg as the most delicate mission of his political life to date. On September 3, 2019, he was noticed worldwide by lying down over several seats for some time during the decisive lower house meeting before the mandatory break and repeatedly closing his eyes to demonstrate his disinterest in the parliamentary debate. Political opponents gave him the nickname Lord Snooty (for example: Lord Hochnase ). 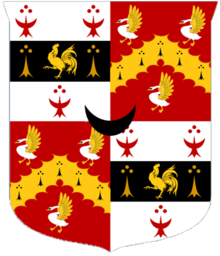 Coat of arms of the Rees-Mogg family

The Catholic Rees-Mogg is close to Catholic traditionalism and is an avowed supporter of the “ old mass ” in the Tridentine rite . In an interview with the Catholic Herald , he expressed his great respect for Pope Pius IX. and its clear standpoints in the Syllabus errorum . In addition, Pope Benedict XVI. been a "wonderfully inspiring Pope for the Church both as a cardinal and as a Holy Father".

Rees-Mogg is a multimillionaire. He bought a house near Westminster Abbey in London and an Elizabethan country house in Somerset . The Rees-Mogg family belonged to the upper middle class in Somerset, where his constituency is located, since the Wales- born Pastor John Rees (1772–1835) married Mary Mogg Wooldrige (1774–1846), the heiress of the Cholwell estate there ; John Rees was court chaplain to Duke Ernst August von Cumberland, who later became King of Hanover.

In January 2007, Rees-Mogg married in Canterbury Cathedral Helena de Chair, daughter of the Conservative House of Commons Somerset de Chair (1911-1995) and Lady Juliet Wentworth-Fitzwilliam. His wife is the only daughter of their mother, born in 1935, who in turn is the sole heir to her father Peter Wentworth-Fitzwilliam, 8th Earl Fitzwilliam (1910–1948), and thereby heir to important estates and a high-quality art collection. The Rees-Mogg couple have one daughter and five sons.

Rees-Mogg is said to represent reactionary, anti-liberal positions with great severity and reluctance to compromise. He is u. a. appeared as a “ denier of man-made climate change ”, anti- abortion and as an opponent of same-sex marriage and development cooperation.

Rees-Mogg was also in the years before and during the campaign before the referendum on further EU membership of the United Kingdom on June 23, 2016, one of the best-known supporters of " Brexit " and thus an opponent of David Cameron . Although Rees-Mogg advocated a “hard Brexit”, i.e. an exit without a contractual agreement, from March 29, 2019, he supported the treaty negotiated by Theresa May with the EU. When May was elected Prime Minister after the referendum, he was one of her internal party critics. When the Prime Minister presented the draft of an EU exit agreement to the public on November 14, 2018, Rees-Mogg called for a vote of no confidence in her on the same day. In a public speech on November 20, 2018, he called on his conservative party colleagues to remove Theresa May now. Otherwise, there is a prospect that the Conservatives, with May at the top, would move into the 2022 general election. The decision of the “Brexit banner bearer” to set up two funds from his company Somerset Capital Management not in London but in Dublin, within the euro area, met with criticism. Conservative MP Nicholas Soames sharply criticized him .

Supporters of the politician began to organize on social media pages under the catchphrase Moggmentum from May 2017 . Alternatively, the word Moggmania is used. There was considerable media coverage of these events. After Rees-Mogg had a verbal exchange of blows with Jeremy Corbyn in the course of a debate about the speech from the throne of Elizabeth II , the hashtag began to generate great popularity again. Many of these involved users support the idea that Rees-Mogg should become Prime Minister of the United Kingdom . Corresponding petitions have also been set up.

From August 2017, the campaign was also received internationally. In part, the nature of the organization and its rapid development are compared to the emergence of the American tea party movement , mainly because Rees-Mogg met Stephen Bannon for a political discussion.

Within British politics, such support campaigns can also be found on the part of the Labor Party . A campaign called Milifandom supported former Labor Party leader Ed Miliband . Corbynmania and Momentum are support groups for Jeremy Corbyn.