The Sinn Féin MPs are not taking their seats in Westminster.

Composition of the newly elected lower house immediately after the election:
† The 5 Sinn Féin MPs did not take their places in Westminster and are therefore not shown.

The British general election on May 6, 2010 took place five years after the May 5, 2005 election. For the Labor Party , which had been the leading ruling party for three electoral terms, Gordon Brown ran for the Conservative Party ("Tories") David Cameron and for the Liberal Democrats Nick Clegg . The Conservatives gained significantly in votes and electoral district mandates and became the strongest force in the lower house, but failed to achieve the desired absolute majority in the lower house. On May 11, 2010, Brown resigned as Prime Minister and Cameron was named Prime Minister by the Queen. He formed a coalition with the Liberal Democrats under Clegg. This was the first coalition in the United Kingdom in generations . For the first time since the February 1974 general election , there was a hung parliament .

The election took place on May 6, 2010, like the previous election, based on relative majority voting in 649 individual constituencies. In the English constituency of Thirsk and Malton , the election did not take place until May 27, 2010, as the UK Independence Party candidate there had died shortly before the election date. Four constituencies had been added since the last election, all of them in England. The candidate with the highest number of votes wins ( first-past-the-post ), there is no second ballot. This right to vote favors large parties like the Conservatives and Labor and regional parties like the Scottish National Party and Plaid Cymru . Medium-sized parties such as the Liberal Democrats or smaller parties without any particular regional focus are disadvantaged.

See also : List of constituencies in the United Kingdom 2010

Constituencies of the top candidates

Brown ran in his Scottish home constituency of Kirkcaldy and Cowdenbeath ( Fife ). Cameron and Clegg also competed in their ancestral constituencies (since 2001 and 2005, respectively): Cameron in Witney ( Oxfordshire ), Clegg in Sheffield Hallam (southwest Sheffield , South Yorkshire ).

Predictions before the election

In virtually all polls since 2008, the Conservatives were ahead of Labor. In the first ten days after the election date was announced, the Liberal Democrats were between 17 and 22% in opinion polls; after the first TV debate between Brown, Cameron and Clegg, that figure jumped to around 30% and then stayed roughly level with Labor until the election. The relative majority suffrage makes it impossible to forecast the majority ratios in the future lower house, since even small majority changes in the constituencies can result in serious shifts in seats in the lower house.

Both the Conservatives and Labor wanted a clear majority of seats in the lower house. If the seat majority would have been only slightly, it would have been likely that the government during the legislative session is gradually losing the majority, since over time occasionally elections in individual constituencies (byelections) take place due to the departure of a seat holder who frequently then in favor of the Opposition candidates go out. Following the logic of simple majority voting, the major parties concentrated heavily on those constituencies in which the voting gap between the two best-placed candidates was small in the last general election (see also Swing State ). In the 2005 election there was a total of 31 constituencies in which the difference in votes between the first two candidates was less than 1 percentage point .

Some parties only competed in certain regions, such as the Scottish National Party only in Scotland, Plaid Cymru only in Wales and Sinn Féin , the Social Democratic and Labor Party (SDLP), the Alliance Party of Northern Ireland and the Ulster Unionist Party only in Northern Ireland. The Respect Party , a left-wing split from Labor that won a London constituency in the last election, only ran candidates in England and Wales. The candidates Brown, Cameron and Clegg competed against each other in a total of three major public TV debates . All candidates focused on the economic crisis and overcoming it. Prime Minister Brown emphasized his economic competence and decisive action, which would have made it possible that the banking crisis did not turn into a general recession. Cameron argued that a bad economic policy led to the crisis; he accused the Labor government of wasting public money and stressed that Britain would never join the euro area under his leadership . Clegg called for a fundamental overhaul of the banking system and the tax system, which Labor was unable to do and which the Conservatives were unwilling to do. 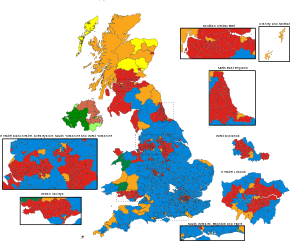 Composition of the newly elected lower house immediately after the election:
† The 5 Sinn Féin MPs did not take their places in Westminster and are therefore not shown.

Results according to individual parts of the country

In England the Conservatives won an absolute majority in constituencies with 298 out of 533 (55.9%). The Liberal Democrats won slightly fewer votes than Labor (28.1%) with 24.2%, but only received 8.1% of the English seats due to the right to vote. The victory of Caroline Lucas , leader of the Green Party of England and Wales , against the Labor candidate in the English constituency of Brighton Pavilion came as a surprise . In the constituency of Thirsk and Malton it was only possible to vote on May 27, 2010, as the UKIP (UK Independence Party) candidate died shortly before the election date. There the conservative candidate Anne McIntosh was elected. 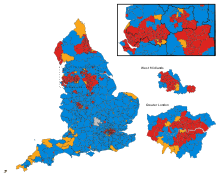 The election results in Scotland differed significantly from those in England. In Scotland, the Conservatives received 16.7% of the vote, but (as in the 2005 election) only one of the 59 constituencies. The Labor Party was able to increase the number of votes and remained the dominant political force in Scotland, winning more than 2/3 of the constituencies. Perhaps the fact that Labor leader and previous Prime Minister Brown is a Scot played a role. With 11 seats in parliament, the Liberal Democrats also achieved a result that was above their national average. The party leader of the Scottish National Party Alex Salmond spoke of the "best result of the SNP since the 1970s".

The Labor Party remained the dominant party in Wales, winning more than half of all Welsh constituencies with 26 seats. It recorded a noticeable loss of votes and seats compared to the 2005 election. The Conservatives gained 5 seats. Candidates from the regional Welsh party Plaid Cymru won the election in the three constituencies of Arfon , Dwyfor Meirionnydd and Carmarthen East & Dinefwr . The party leader of Plaid Cymru Ieuan Wyn Jones was disappointed and criticized the exclusion of his party (and the SNP ) from the television debates of the big party leaders. This contributed to the fact that his party no longer received mandates.

The most significant result in Northern Ireland was the loss of East Belfast constituency to Peter Robinson ( DUP ) to Alliance candidate Naomi Long . This was the first constituency that the Alliance in Northern Ireland was able to win in elections to the House of Commons. The election result in the constituency of Fermanagh South Tyrone was so close that the votes were counted three times. Michelle Gildernew ( Sinn Féin ) won against the unionist candidate Rodney Connor. The constituency Down North won by a large margin by the non-party candidate Sylvia Hermon , who had left the Ulster Unionist Party a few weeks earlier . What was striking was the overall significantly lower turnout compared to the 2005 election. 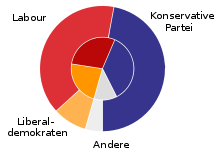 The election went largely according to plan without any major incidents. However, it was perceived as a scandal that several 100 eligible voters in various constituencies were unable to cast their votes because they had to queue in front of the polling stations and the polling stations closed on time before their turn. In the constituency of Liverpool Wavertree , some polling stations were missing ballots after the turnout was unexpectedly high, so that at least one polling station had to be temporarily closed until new ballots were brought in. The counting of some constituencies dragged on into the afternoon of the following day. The closest result came in the Northern Irish constituency of Fermanagh & South Tyrone , which the previous seat owner Michelle Gildernew from Sinn Féin was able to defend with a four-vote majority (21,304 against 21,300).

After the first preliminary results became known, there were initial reactions from the party leaders. Clegg described the result as a "disappointment", Cameron spoke of the fact that Labor had lost the mandate and announced that a government would be formed under his leadership. Prime Minister Brown expressed his pride in winning the Scottish constituency of Fife for the seventh consecutive year and proud of Labor's achievement. Leading Labor politicians like Peter Mandelson rejected Brown's resignation on the grounds that Cameron had received “no mandate”.

Analysis of voter movements: the swing

Voter movements in the 2010 House of Commons election

Voter movements from Labor to Conservatives 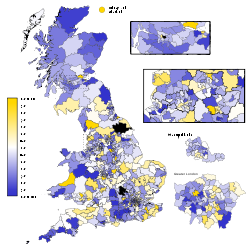 Voter movements from the Liberal Democrats to the Conservatives

Electoral movements from Labor to the Liberal Democrats

Initial speculations about possible coalitions showed two scenarios: a coalition government made up of conservatives, the Democratic Unionist Party and an independent unionist under Cameron on the one hand, or a coalition of Labor, Liberal Democrats and Northern Irish SDLP and the Alliance Party under Brown on the other. In either scenario, however, the coalitions would not have had an absolute majority. The day after the election, Cameron announced that he would start talks with the Liberal Democrats about forming a possible coalition government or tolerating a conservative minority government. The leader of the Liberal Democrats, Clegg, said that given the election results, the Conservatives had the right to be the first to try to form a government. Prime Minister Brown said he respected Clegg's position that he wanted to negotiate with the Conservatives first. Should these negotiations not lead to a result, he was ready to speak to Clegg about the points on which there were possibilities of an agreement. The central point in all coalition negotiations emerged from the demand of the Liberal Democrats to change the previous relative majority voting system in the direction of proportional representation , a demand that had been rejected by the Conservatives and Labor until then.

On May 11th, Brown announced his resignation from the post of Prime Minister and Labor Chairman. Negotiations between Labor and the Liberal Democrats on the formation of a coalition government had previously failed. Thereupon the Queen appointed Cameron as the new Prime Minister and entrusted him with the formation of the new government. In the days that followed, the Cameron I cabinet was formed .