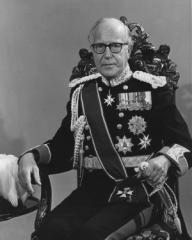 Peter Edward Ramsbotham was born as the second son of Herwald Ramsbotham . His father was a politician in the Conservative Party and Governor General of Ceylon (1949-1954).

He attended Eton College and Magdalen College at the University of Oxford . In 1938 he fell ill with polio . For this reason he was not sent to Dunkirk with the British Expeditionary Force at the beginning of the Second World War , but instead joined the "Security Section" of the British War Office . After he was declared fit for military service, he joined the British Army . There he served from 1942 to 1943, initially as a private , then later, after being promoted to officer , in the Reconnaissance Corps. From 1943 he was an officer in the Intelligence Corps in France . Where he led a unit of counterintelligence in Normandy . His job here was to intercept and capture German agents.

Later, towards the end of the Second World War, Ramsbotham switched to the British Control Commission in Germany and Austria . He was stationed in Hamburg and Berlin , among others , and was involved in the denazification of Germany. In 1946 he retired with the rank of Lieutenant Colonel from the army service. In recognition of his services, he was mentioned in Despatches in August 1945 . In 1949 he received the Croix de guerre .

In 1948 Ramsbotham took the entrance exam at the Foreign Office . Because of his poor math results , he had to retake the exam six months later. At the Foreign Office he was initially in Berlin, including during the Berlin blockade , at the “German Department” of the Foreign Office. From 1950 to 1953 he worked under the direction of Sir Roger Makins in the "Department of Economic Relations" of the Foreign Office. During this time, Ramsbotham developed into a specialist in the field of oil production and in all questions of economic relations with the countries of the Middle East , in particular with Iran , Saudi Arabia and the other Gulf states . During the Abadan crisis , he was a member of the delegation in negotiations with Iranian Prime Minister Mohammad Mossadegh .

In 1953 he became Head of Chancery of the British Mission to the United Nations and served during the Suez Crisis under Sir Pierson Dixon , the British Ambassador to the United Nations. In 1957 he returned to the Foreign Office in London , where he was head of the "Western Organizations" department and head of the "Planning Department" until 1961. In 1961 he was promoted to counselor. From 1963 to 1967 he was Head of Chancery at the British Embassy in Paris , at the time when Britain's accession to the Common Market failed. During a two-year absence from the Foreign Office, Ramsbotham worked at the International Institute for Strategic Studies in London from 1967 to 1969 . In 1969 he became High Commissioner in Cyprus .

In 1971 Ramsbothom became British Ambassador to Tehran under Prime Minister Edward Heath . Ramsbotham was familiar with Arab politics, but was not considered a “friend of the Arabs” and was therefore the ideal candidate for this post for both sides, both for the British government and for Shah Mohammad Reza Pahlavi . Until 1973 he was ambassador to Iran. In 1974 he became British Ambassador to Washington, DC , where he represented British interests until 1977 under three different presidents, Richard Nixon , Gerald Ford and Jimmy Carter . Against his will, he was recalled in 1977 by then British Foreign Secretary David Owen and replaced by Peter Jay . Ramsbotham was "angry" about the recall, but he endured it "with dignity". In an interview from 2001 he described his time in Washington with the words: "just my cup of tea". Ramsbotham's last post in the diplomatic service was the position of governor of Bermuda from 1977 to 1980 . In December 1977 he called on Prime Minister James Callaghan for British troops there after riots broke out in Bermuda over the execution of two assassins who murdered Ramsbotham's predecessor, Sir Richard Sharples , in 1973 . In 1980 Ramsbotham retired.

Ramsbotham spent the last years of his life at his home in southern England, where he devoted himself to his hobbies, gardening and trout fishing in the River Itchen . He died after a long illness in his home in Ovingston of complications from pneumonia .

Ramsbotham was named Companion (CMG) of the Order of St. Michael and St. George in 1964 and knighted as Knight Commander (KCMG) in 1972 , adding the suffix "Sir" to him. In 1978 he became the Knight Grand Cross of the Order. In 1976 he was appointed Knight Grand Cross (GCVO) of the Royal Victorian Order and Knight of Justice (KStJ) of the Order of Saint John . Since 1992 he was Deputy Lieutenant of Hampshire. In 2004 he inherited the title of Viscount Soulbury from his older brother James Ramsbotham , but was still mainly known under the lower-ranking title Sir Peter Ramsbotham .

Peter Ramsbotham was married twice. In 1941 he married Frances Massie Blomfield, who died in 1982. They had a daughter and two sons together. His daughter was physically disabled after a traffic accident and has since passed away. In 1985 he married Dr. Zaida Hall, the widow of Ruthven Hall.