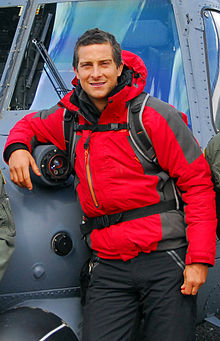 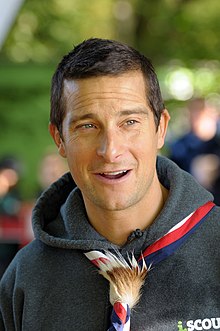 Edward "Bear" Grylls is the son of the late Tory politician Sir Michael Grylls . He graduated from Eton College and has a degree in Hispanic Studies from the University of London .

Grylls served from 1994 to 1997 with the 21st Special Air Service Regiment ( Artists Rifles , Reserve Unit ), a special unit of the British Army Reserve . He retired from the SAS after sustaining three vertebral fractures during a parachute jump exercise in 1996. He was made an honorary lieutenant commander by a commission of the Royal Navy .

In 1998, at the age of 23, Grylls became the youngest Briton to climb Mount Everest . In 2007, he flew the first man with a paramotor successful Mount Everest. Since July 11, 2009 he has been the Chief Scout of the United Kingdom and Overseas Territories .

He lives with his wife Shara and three sons on a converted barge on the Thames and temporarily on St. Tudwals West , a small island off Wales .

In 2005 the documentary Escape to the Legion was shot. In this film, Grylls and eleven other British recruits were filmed as they spent four weeks undergoing mock training for the French Foreign Legion in the Sahara .

Grylls hosted a series of documentaries for the Discovery Channel Europe known as Adventure Survival (English title: Man vs. Wild ), which is also aired on DMAX under the name Exposed in the Wild . In this series, Grylls shows how you can survive in the wilderness and find your way back to civilization from there. In 2010 he was seen in the Discovery Channel series Worst-Case Scenario . In the series, Grylls shows how one can survive threatening situations in everyday life such as a fire in a discotheque or persecution as unscathed as possible.

On March 14, 2012, several media outlets, including the Times , reported that the then 37-year-old had denied two contractually agreed projects. The Discovery Channel then fired the survival expert. In February 2013 he resumed his collaboration with the Discovery Channel.

From July 8 to August 26, 2013, Grylls' new series Get Out Alive was broadcast on NBC in the Anglo-American region. The format is a reality show in which several teams compete against each other and have to pass various survival scenarios. In Germany, the show was broadcast as Bear Grylls: Get Out Alive , like Grylls' previous formats, from November 10, 2013 on DMAX.

On October 7th, 2013 his new show Bear Grylls: Escape from Hell started . Here Grylls deals with real accidents in the wilderness and reconstructs them in order to test how he would have freed himself from such an extreme situation. The German premiere took place on February 2, 2014 on DMAX.

From July 28, 2014, NBC broadcast the six-part program Bear Grylls: Stars am Limit ( Running Wild with Bear Grylls ) in the USA , in which Grylls famous personalities, etc. a. Barack Obama , took him into the wild for two days. The program was also broadcast on DMAX every week from March 13, 2015.

In April 2019, the first season of his series You vs. Wild on Netflix , where viewers have the option to give Bear Grylls safe instructions or put him in dangerous situations.

He also wrote a number of children's survival books: