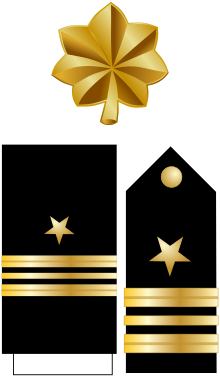 Lieutenant Commander (abbreviation: LCDR (USN) or LtCdr (RN)) is a military rank of many naval forces in the English-speaking area, especially in the US Navy (USN), Royal Australian Navy (RAN) and Royal Navy (RN).

The Lieutenant Commander, NATO rank code OF-3, is the first staff officer rank and thus the salary equivalent of the Corvette Captain of the German Navy .

Even if the Lieutenant Commander has the same NATO rank code as the Korvettenkapitän of the German Navy , one cannot compare them due to the historical development of the ranks.

As the deputy (loan word of the French lieu tenant ) of a commander, he is more of a lieutenant in a prominent position and has positions on seagoing units that are more likely to be assigned to lieutenants in the German Navy , while the corvette captain in the NATO ranking system in English Translations should be translated with Commander (Junior grade) .

While it is customary in the US Navy to address a lieutenant commander with the abbreviation “Commander”, this is not provided for in the navies of Great Britain and the Commonwealth of Nations.

He also wears the lieutenant's visor (without the oak leaf ornamentation, the so-called "scrambled eggs").