As Adventure ( Latin advenire , arriving 'and adventus , arrival'; Middle High German : aventiure ) is a risky trip or a high-risk exploration of an area or space , which is strongly from everyday is different. It is about leaving the familiar environment and the social network in order to undertake something risky that promises to be interesting, fascinating or even dangerous and where the outcome is uncertain. In this sense, expeditions into the unknown have always been an adventure. The risks of an adventure are usually (depending on the situation) physical damage , psychological consequences , loss and damage to property or legal consequences .

The term “adventure” originally stands for a serious undertaking of cultural significance. This becomes clear in the aventiurs of the medieval knight epic , carried by a high ethical basic attitude , as found poetically in the Iwein and Erec des Hartmann von Aue or in the Parzival by Wolfram von Eschenbach .

As early as the (late) Middle Ages, “adventurous” also meant injuries that were dangerous or caused by reckless recklessness.

In the post-knightly period, which is generally assumed to be the lifetime of Emperor Maximilian I , the so-called "last knight" (1449–1519), until today, derisive expressions such as " love adventure " also appear in literature and colloquial language. , "Adventurous" or "adventurer". The name Casanova stands for the prototype of the "love adventurer". As a modern adventurer people are referred, in whole or temporarily from working life to get off and one - medi-marketed ended as a rule - pay spectacular company. The derogatory meaning of the word results from the assessment that the "adventurer" spends his life on the hunt for tension stimuli, instead of pursuing "serious work", which raise the adrenaline level , attract the public's attention and should lead to a personal level of awareness ( round the world races , desert crossings, Atlantic crossings , Antarctica marches, climbing services, record hunts in different areas).

Modern adventurers like Arved Fuchs , however, are positive about this term. They see their ventures as a legitimate way of shaping their lives , even as a profession that expands their own horizons, nourishes the adventurer and serves the public in the entertainment sector. 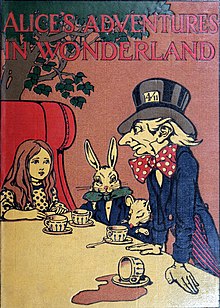 The children's story Alice in Wonderland is a fictional adventure

→ Main article: Travel Adventure deals with fictional and real adventures in the specialty field of travel.

The venture researcher Siegbert A. Warwitz differentiates between real (taking place in reality) and fictional (born out of fantasy) adventures:

Real adventures require initiative, frustration tolerance , fear mastery, courage and above all the willingness to accept a possible failure and its consequences. They are therefore direct experiences in life.

Fictitious adventures take place in the mind of inventors and consumers as pure imaginary adventures . They can touch you emotionally, but do not require the listener or reader to be willing to take risks. There are numerous fictional adventures in literature: in adventure novels , horror stories , myths , sagas and legends . They range from the early Gilgamesh epic to the ancient legends, the Iliad and the Odyssey of the poet Homer and the medieval heroic epics to the fantasy depictions of Harry Potter . The media of film and television also deliver visualized adventure events such as pirate , knight , coat-and-sword or sandal films .

According to Warwitz, the fictional adventures as products of illusion primarily have an entertainment value, while the real adventure, above all under expert educational supervision, can be of high personality-building value. 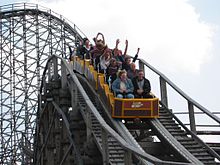 The ride on a wooden roller coaster as a "pseudo-adventure"

The use of the term “adventure” has increased inflationarily in recent times . According to the guideline “learning by doing” of the reform pedagogue WH Kilpatrick , the creator of the scout movement , Robert Baden-Powell , had placed the “adventure of action” at the center of his educational concept as early as 1907.

According to Warwitz, real adventures are those that require personal commitment, courage, fear control and risk-taking skills. The outcome is uncertain and can cause harm and suffering to the daring on a physical, emotional and mental level. Dealing with this conflict and this consequence constitutes the "real adventure" and must therefore not be rationalized away.

When pseudo adventure appearances is awakened a real adventure. Providers of well-organized trips like to use terms such as “ adventure travel ” or “ expedition ” for their offers to satisfy the tension needs of their clientele . In fact, the security precautions as well as the technical and organizational handling by the organizer rule out a failure with a high degree of probability. In addition, the passive “adventurous” (Warwitz) is largely relieved of personal responsibility by the organizer. The adventure seeker has almost no influence on what is happening and almost no negative consequences for himself to fear. The booked adventure is safe. The “adventure traveler” can also protect himself by taking out insurance. The pseudo adventure lacks the elements and the allure of failure and personal responsibility, which the pedagogue and forefather of experiential education Kurt Hahn sees as constitutive for adventure.

The numerous "exciting" stations of the amusement parks to the ghosts encounter roller coaster ride or the fall of the " Free Fall Tower " can be described as an adventure second hand that any can be repeated with the same output of the experience often. With each rep , the kick intensity continues to decrease . Here, too, there is a lack of real threats, the automatic design of the processes and personal responsibility for any adverse consequences that make up the actual adventure. Warwitz brings the alternative mentality and behavior from real and apparent adventure to the formula " Dare to take responsibility or let yourself be adventurous ."

Since the post-knightly era, beginning with the knight colportages such as those of Don Quixote , but also with disreputable undertakings of the more recent times, the term and figure of the "adventurer" who voluntarily confronts imponderables from a secure environment have also been somewhat disrespectful. derogatory significance assumed. This expresses itself z. B. also in the adjective "adventurous" for a not entirely trustworthy undertaking.

Voyages of discovery and adventure

The research and discovery journeys from the Renaissance to today were experienced by those involved at the same time as a great adventure that one wanted to create victoriously, in which one wanted to be a part. The journeys of Christopher Columbus , which led to the discovery of America , the research journeys of James Cook , Alexander von Humboldt , David Livingstone , Roald Amundsen or John Franklin , all of which served to gain knowledge, were also regarded by contemporaries as earth-shattering adventures. They were accompanied by high risks to life and limb. Their outcome was highly uncertain.

With increasing security and the spread of international shipping in the late 19th century, the adventure factor of expeditions at sea also declined . In the 20th century, the beginnings of manned space travel in particular are to be viewed as an adventure, since at that time travel into space was still a relatively big risk due to the lack of experience with the technology .

The assessment of whether participating in acts of war is perceived as an adventure depends on the individuality and time:

The knights of the Middle Ages set out in religious zeal for the papal crusades with the awareness that they were embarking on the greatest adventure of their lives, in which, in addition to eternal salvation, they could also gain rich booty.

Even the young men of the youth movement at the beginning of the 20th century, the "patriotic war" met their need for adventure. Up until the First and Second World Wars, unsuspecting young people reported cheering, waving flags and singing in anticipation of intense experiences, fame and honor as volunteers for combat missions. Even war reporters sometimes satisfy a certain need for adventure to this day, as is clear from the biography of Ernest Hemingway , who was active as a reporter and analyst of the events for several press organs in the most diverse and distant theaters of war. In the case of well-known war pilots such as the so-called “red baron” Manfred von Richthofen , the French aviator writer Antoine de Saint-Exupéry or the test pilot Hanna Reitsch , a strong need for adventure in the element of war cannot be overlooked.

Even today, according to press reports and self-portrayals, many young people are drawn to the theaters of war in the Middle East out of a thirst for adventure. In addition, armies with the adventure factor are also advertised to attract new blood. In 2012, for example, an advertisement by the Bundeswehr for an “Adventure Camp” in the online section of the youth magazine Bravo caused a sensation.

The play area offers a wide field for adventure experiences, which schools and leisure facilities like to use because of its attractiveness. In keeping with their adventure character, these are games whose uncertain outcome has to be sought, endured and managed by the players. The components risk and risk play an essential role.

Both children and adults approach the topic of adventure in a playful way. Adventures can be lived out directly in Live Action Role Playing (LARP for short) or told as an interactive story in a pen & paper role-playing game . In a computer role-playing game , the player can control a character himself and mostly influence the action of the game significantly.

The sport related to the play area also meets the need for adventure with its constantly expanding arsenal of daring sports .