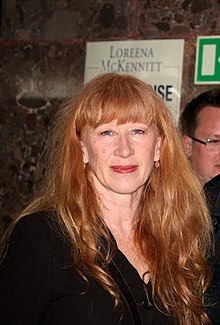 Loreena Isabel Irene McKennitt , CM , OM (born February 17, 1957 in Morden , Manitoba ) is a Canadian musician and composer . She has lived in Stratford (Ontario) since 1981 .

Loreena McKennitt was born in Morden, Manitoba on February 17, 1957 , and has Irish and Scottish ancestry. Her mother Irene was a nurse and her father Jack was a cattle dealer. Loreena wanted to be a vet as a child. But as she herself says, "it wasn't she who came to music, but music to her."

Loreena moved to Stratford, Ontario , in 1981 , where she still lives. She released her first album Elemental in 1985 . She gained worldwide attention with the albums The Visit (1991), The Mask and Mirror (1994) and The Book of Secrets (1997). All albums are produced by herself and released by her own record label Quinlan Road .

In 1998 her fiancé Ronald Rees and two other good friends were killed in a boat accident. After this personal tragedy Loreena McKennitt built in the same year the Foundation Cook-Rees Memorial Fund for Water Search and Safety . The proceeds from the sale of the double album Live in Paris and Toronto went to the foundation.

In July 2004 she was awarded membership in the Order of Canada by Governor General Adrienne Clarkson , the highest civil honor in Canada.

After a lengthy absence from the stage, Loreena McKennitt performed on December 7, 2004 in the Cirque Royal in Brussels at a concert of the Yehudi Menuhin Foundation . In addition to traveling and working on her albums, she is also an actress, singer and composer at the Stratford Festival of Canada , a renowned Canadian Shakespeare festival. In September 2006 she gave three concerts in the Alhambra in Granada . The concerts were recorded by the American television station Public Broadcasting Service and broadcast in March 2007. A concert recording was released on DVD .

On November 17, 2006, the album An Ancient Muse was released. In preparation for this album, she went on research trips to Turkey , Greece , China and Mongolia . The concerts of their European tour of the same name in spring 2007 were sold out in many places.

At the opening ceremony of the 2010 Winter Olympics in Vancouver, she made a brief appearance in the music program.

In November 2010 the album The Wind That Shakes the Barley, a collection of Irish folk songs, was released. This album is also the focus of the two European tours in spring and summer 2012.

On October 29, 2019 McKennitt announced that with the end of the "Lost Souls" tour, she would be suspending her musical activities for an indefinite period in order to devote more time to her family. She also wants to work to fight global climate change. She also criticized the effects of modern technology on societies, families and individuals. In particular, the erosion of democracies, the spread of fake news and the loss of privacy are a result of the misuse of personal data and surveillance capitalism .

In 2005 McKennitt took legal action in the UK against her former colleague Niema Ash, who had written a book in which she wanted to publish highly personal information from McKennitt's personal life. McKennitt, who saw her personal rights violated and invoked Article 8 paragraph 1 of the European Convention on Human Rights (ECHR) , obtained a publication ban. Ash was sentenced to a fine of £ 5,000 and part of the court costs. The publication ban was confirmed. However, around 300 copies of the book were already on the market. For her part, Ash exercised her right to freedom of expression under Article 10 of the ECHR and unsuccessfully pursued all legal remedies . In 2007, the British House of Lords was the last resort to dismiss Ash's appeal against the ruling, which became final. The ruling has been cited as a landmark in protecting the privacy of prominent people and a significant precedent for the implementation of Article 8 of the European Convention on Human Rights in the UK.

Loreena McKennitt's songs are characterized by mystically influenced lyrics in the newer albums, paired with the music of traditional instruments. Traditional Irish or Celtic and oriental motifs are dominant . With her album A Midwinter Night's Dream , Loreena McKennitt confesses to religious roots by interpreting Christian texts and hymns. McKennitt also uses traditional and classical themes in her music. So she set z. B. Works like "The Lady Of Shalott" by Alfred Tennyson , The dark night of the Soul of John of the Cross and "The Highwayman" by Alfred Noyes as well as several texts by William Shakespeare .

In her music, Loreena McKennitt uses stylistic elements such as modal keys , quint-parallel voices or drone tones as well as typical rhythms and instruments, especially from the "celtic folk" : with this she achieves an archaic effect. On the albums The Mask and Mirror, The Book of Secrets and An Ancient Muse there are more influences from Spanish and oriental music (especially Sufism ). Loreena McKennitt plays several instruments, including a. also piano , harp and accordion .