Stratford [ ˌstɹætfəɹd ] is a city in the southwest of the Canadian province of Ontario on the Avon River . The river and city were named after Stratford-upon-Avon in England and the River Avon there. In 2011 Stratford had 30,886 residents.

Since Stratford is not far from Detroit , many companies from the automotive supply industry have settled here , including FAG Kugelfischer (FAG Bearings Ltd), a German ball bearing manufacturer from Schweinfurt .

Once a year there is the Ontario Pork Congress on the Stratford fairgrounds , where pigs from all over Ontario are auctioned. There is also the weekly farmers' market on the same fairground, where farmers from the region sell their vegetables and fruit. In general, Stratford is surrounded by arable land , mainly corn , but also soybeans and barley .

Stratford has an ice hockey team called the Cullitons ( Cullies for short ) that play in the Junior B Inter-Ontario League. The stadium is on the river near the festival theater and has seating for around 2500 spectators. There are also several indoor ice hockey arenas for the public in Stratford.

Stratford has a baseball team called the Stratford Storm , formerly called the Hillers . There is a semi-covered stadium, Hiller Stadium, for around 500 spectators.

There is a country club in Stratford which is next to a golf course . There are also several curling lanes and squash rooms in the country club building .

There are also several indoor and outdoor basketball facilities in different places around town.

Stratford has a campus of Conestoga College , which is located in Kitchener . Students from grade 12 can attend Conestoga. Stratford also has a famous cooking school , the Stratford Chefs School . 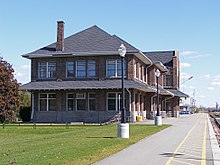 You can get to Stratford by car, bus or train ( VIA Rail Canada ). Within Stratford you can take the bus from the city center (town hall) to almost any place in the city.

Stratford has a pilot project to equip 200 households with public WiFi . The operator of the WLAN is Festival Hydro and couples the WLAN with smart meters .