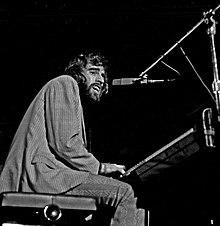 Richard Manuel (born April 3, 1943 in Stratford , Ontario, † March 4, 1986 in Winter Park , Florida) was a Canadian composer, singer and multi-instrumentalist ( piano , drums , keyboard , clavinet , slide guitar and others). Manuel became known as a member of the rock group The Band .

As a child, Manuel sang in the choir of a Baptist church . As a teenager, Manuel was on tour as the singer of Rockin 'Revols , a band from Stratford.

After Levon Helm , Robbie Robertson and Rick Danko , Manuel was the fourth member of The Band to join Ronnie Hawkins & The Hawks (in the summer of 1961) . After The Band released their debut album Music from Big Pink in 1968 after their appearances with Bob Dylan , Manuel became known and admired not only for his instrumental talent but also for his baritone voice and his falsetto singing . Among Richard Manuel's greatest admirers was Eric Clapton , Clapton over Manuel:

“ I was madly in love with Richard… When he sang in that high falsetto the hair on my neck would stand on end. Not many people can do that. "

It became known early on that the often depressed Richard Manuel was addicted to alcohol and drugs. One of the most famous songs with Manuel as lead singer is I Shall Be Released , which he performed at The Last Waltz , The Band's farewell concert on Thanksgiving in 1976, together with composer Bob Dylan. While guitarist Robbie Robertson completely separated from The Band as a result of the concert , the remaining band members tried a comeback in 1983.

Richard Manuel committed suicide while touring with The Band in 1986, hanging himself with a belt in the bathroom of his motel room while his wife, Arlie, slept in the next room. The band had given a concert the day before and then made plans for the next concert in Helm's room. At around 2.30 am, Manuel left his band mates, who described his mood as good. The next lunchtime Manuel was found by his wife, the band mates Helm and Danko who had been summoned tried in vain to help. According to the police report, Manuel died between 2.30 am and 3.30 am, and cocaine was found in his blood alongside alcohol. He was buried in his hometown of Stratford.

The only album by Manuel that was released in 2005 (in Japan in 2002) was Whispering Pines: Live at the Gateway 1985 , a live recording of a concert on October 12, 1985. It is on all of The Band's recordings before published after his death, and represented all recordings of the Hawks after 1961. In addition, Manuel was a sought-after studio and live musician, he worked a. a. with Eric Clapton, Tom Petty , Bonnie Raitt , Bobby Charles , Willie Nelson .