Dinan [ dinɑ̃ ] is a city in western France and a sub-prefecture of the Côtes-d'Armor department with 14,166 inhabitants (as of January 1, 2017). This Breton city ​​is surrounded by an impressive ring of city walls. Strategically located for traffic between Normandy and the northern coast of Brittany , Dinan was mostly built on a hill. The old town is about 75 m above the river Rance , which flows north and flows into the English Channel between Saint-Malo and Dinard . For a long time Dinan was the most northerly point to cross the Rance and its wide estuary delta. The construction of the Canal d'Ille-et-Rance created a navigable connection with the capital Rennes . 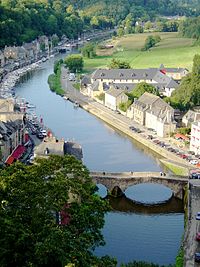 The port of Dinan

View of Dinan with Saint-Malo church

The history of Dinan has been known since the 11th century, although the place has likely been inhabited since ancient times. At that time it was a market town in which a Benedictine convent settled. The castle of Dinan became known in a depiction on a fragment of the Bayeux carpets . It shows how the mound castle of the place was attacked by the soldiers William the Conqueror . It is the most important historical representation of this medieval castle shape, which has not been preserved due to its wooden construction.

In the 12th century, an Arab geographer mentioned Dinan in his records, where he reported the prosperity and a stone wall. This beginning of a fortification was reinforced until the 15th century. At the instigation of the municipalities of Saint-Malo and Saint-Sauveur , Dinan was bought by the Duke of Brittany John I in 1283. In this epoch the ring of the city walls was completed to the current state. The towers of l'Alloué , Vaucouleurs , Saint Julien , Beaufort , des Connétables, de Coëtquen , Penthièvre , Longue et Sainte Catherine surround the old town in a trigonometric shape. The battlement , which is still preserved for a length of 2600 meters, was broken through by the gates of Jerzual , Saint-Malo , Brest , Guichet and Saint-Louis .

In 1357, during the wars for the succession of the duchies of Brittany, Bertrand du Guesclin successfully defended the city ​​besieged by the English troops. He faced Thomas of Canterbury in a single fight and emerged victorious. After several fruitless attempts, Duke John IV managed to regain control of the city in 1364. He had the donjon built for the Duchess Anne . Like all other Breton cities, Dinan was definitely annexed to the Kingdom of France at the end of the 15th century. The city continued to grow, the port on the Rance encouraged trade. Dinan had actual control over the river route that allowed the goods to be transported as far as Saint-Malo. In 1598 Dinan decided in favor of the new King of France Henry IV and against his governor, the Duc de Mercœur, who opposed him. From this time on, the fortifications lost their importance and were no longer maintained. In the 17th century, other religious orders founded new monasteries: Capuchins , Ursulines , Dominicans and Poor Clares .

In the 18th century trade was stimulated by the establishment of numerous weavers who mainly made sailcloth for the boats that were then sent to Saint-Malo through the valley of the Rance. At the initiative of a developing bourgeoisie , various measures were taken to combat the poor hygiene that prevailed in the city. In the 19th century, the port lost its importance with the construction of a road bridge in 1852 and a railway connection in 1879. Numerous stately houses were built in the city. The city gradually turned into a summer residence, which was particularly appreciated by the English.

In the 20th century, the old town of Dinan was the prey of a fire (1907) and bombed in August 1944. The city has been restoring its cultural heritage to this day. The half-timbered houses still line the Place des Cordeliers , Rue de l'Horloge and other cobbled streets in the center. The churches of Saint-Sauveur and Saint-Malo are in the middle of the two old parishes of the city.

Dinan attracts many tourists and extends beyond the city walls to the municipalities of Quévert , Taden and Lanvallay .

Construction that stretched from the end of the 15th to the end of the 19th century. In the Gothic and Renaissance style , with impressive church windows from the beginning of the 20th century and its English organ with polychrome organ pipes, built by Olknow in 1889.

The bell tower from the 15th century symbolizes the prosperity of the city with a height of 45 m. He still has the bell that Duchess Anne gave.

Founded in the 13th century, the current buildings date back to the 15th century. The convent housed the Estates-General of Brittany in 1573 and 1634. It was restored in the 19th century and is now used by a private educational institution.

It was built from the 12th century, continuously rebuilt and is still unfinished today. It houses the grave in which the heart of the Connétables du Guesclin is buried. The impressive portal dates from the 19th century and combines different construction methods (Romanesque, Gothic, Baroque and Classicist). See also: Evangelist window (Dinan)

Municipalities in the Arrondissement of Dinan