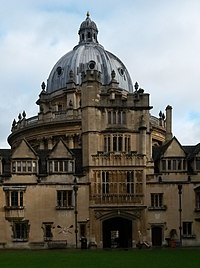 The Brasenose College , Oxford is one of the constituent and one of the older colleges of Oxford University .

Brasenose College was built in 1509 on the site of Brasenose Hall, which probably dates back to the twelfth century. A second large courtyard was later added, and the college chapel was moved from the older courtyard to a detached building, but with the old ceiling decorations. The college's unusual name (most Oxford colleges have religiously inspired names) goes back to the "Brazen Nose", the large bronze door knocker that was attached to the gate of Brasenose Hall. This door knocker was given special powers, and for this reason it was stolen in 1333. It wasn't until 1890 that he was found at a girls' school in Stamford, Lincolnshire, and the whole building had to be bought to get the door knocker. The original hangs in the college hall today and a stone replica is placed over the gate.