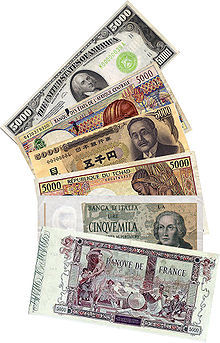 Banknotes from different countries (some historical)

Sorts (always plural; in Switzerland notes , in Austria currency ) is the term used in banking to describe cash that is in circulation outside the issuing country in which it is considered legal tender . Colloquially, types are often referred to as " foreign exchange " or "travel currency ". However, foreign currencies are only created from sorts when the foreign cash is paid into a bank account in the corresponding local currency .

On the one hand, it is necessary for the designation as sorts that it is cash, so that travelers checks or other cash substitutes do not represent sorts, but foreign exchange. On the other hand, this cash must circulate outside the currency area in which it is legal tender (e.g. Swiss francs outside Switzerland and Liechtenstein).

Theoretically, foreign cash can only be in circulation in other countries if the issuing country has not issued any export bans or foreign exchange regulations with regard to the export of its own currency and thus does not restrict or even prohibit the free movement of capital . Export restrictions, on the other hand, allow the export of national currency to a limited extent, while import bans in turn prevent the legal introduction of the national currency. There are no import or export restrictions for freely convertible currencies.

Types within the meaning of the monthly ID card regulation of the Deutsche Bundesbank are foreign banknotes and coins, which are legal tender, and cashed travelers' checks in foreign currency (§ 5 MonAwV).

The currency business at German credit institutions is a financial service requiring a license within the meaning of Section 1 (1a) sentence 2 no. 7 KWG . It includes trading in banknotes or coins, which are legal tender, and selling and buying travelers' checks. Exchange offices are therefore financial services institutions and require a permit from the banking supervisory authority . Anyone who operates financial services on a commercial basis or to an extent that requires a commercially established business operation requires prior written permission from the Federal Financial Supervisory Authority (BaFin) in accordance with Section 32 (1) KWG .

According to national and international experience, the currency business must be viewed as particularly prone to money laundering. In contrast to the other banking transactions , in which transactions in cash - with the exception of other over-the-counter transactions - play only a subordinate role, the currency transaction is typically a cash transaction. In addition, these business areas are largely characterized by occasional customers about whom the individual institute has no detailed knowledge from a business relationship .

Therefore, Section 25k (3) KWG obliges banks to apply the identification requirements to all currency transactions accepted in cash if the transaction exceeds an amount of € 2,500 or the equivalent in foreign currency. This means that the requirements of the Money Laundering Act (GwG) must already be met for sorts with a threshold amount of € 2,500 or more if the transactions are in cash and the customer does not have any accounts with the bank. If, on the other hand, the transaction is processed cashlessly via an account held by the customer at the bank, the general threshold of € 15,000 applies.

Credit and financial services institutions that conduct the currency business must therefore identify the customer in accordance with Section 1 (5) of the GwG or Section 7 of the GwG and record the findings in accordance with Section 9 of the GwG if the transaction amount exceeds € 2,500 or € 15,000 it is a cash transaction. In this context, banks should also ask about the beneficial owner and document this information.

The availability of varieties requires their unrestricted tradability, free of any export and import bans or restrictions. The currency business is intended to facilitate travel by providing travelers with foreign cash that they might otherwise have to find cumbersome in the country of travel. The currency business at German banks is now limited to banknotes, so that coins are no longer part of the currency trade. Credit institutions ensure that they only buy and sell genuine banknotes in the currency business due to their specialist knowledge as part of their due diligence, so that the buyer does not have to bear the risk of counterfeit banknotes.

In the currency business, bank customers are also offered those currencies that are subject to import restrictions or even an import ban in the destination country. In these cases, the credit institutions draw attention to the prohibitions or restrictions in brochures (which represent general terms and conditions ) and exclude liability for damage. When purchasing varieties that are subject to an export and / or import ban or import restriction, the buyer runs the risk of being discovered upon entry and at least grossly negligently exposes himself to the risk of punishment. A violation of foreign exchange or import restrictions is usually punishable as a violation of customs regulations or as a foreign exchange offense in the states concerned. Before buying a variety, travelers can find out about any import restrictions on the relevant website of the Federal Foreign Office.

Varieties have the advantage that they can also be traded between private individuals without a commercial bank. If you still have varieties after a trip, you can also sell them privately to people who will travel to the relevant destination areas in the future. Here is the average exchange rate basis, both save because they the - incurred on the conversion at a bank - exchange loss sharing; however, the purchaser buys this advantage with the risk of acquiring counterfeit varieties.

Varieties are also a form of store of value . In weak currency countries in particular , many citizens invest their savings in a hard currency , in particular in euros or US dollars . However, keeping money is much less secure than buying travelers' checks. These are insured in the event of loss, while cash is irretrievably lost in the event of loss. In addition, the “investors” do not receive any interest.

If you withdraw cash from an ATM during a trip abroad (which, strictly speaking, are not currency ), your house bank in your home country will not charge the amount withdrawn with the currency, but with the cheaper exchange rate , sometimes plus an ATM - Pay . The regulations on the European Payments Area (SEPA) require that cross-border transactions are priced the same as domestic ones. These regulations have been in effect since January 2002.

As coarse varieties in are Numismatics full crowns and valleys links, and some small coins called fine silver.