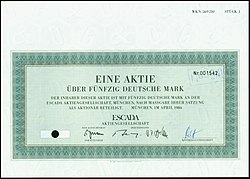 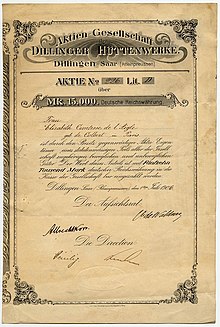 The par value share is issued with the inscription of a fixed par value, which is stipulated in the articles of association of the stock corporation. This nominal value must be at least 1 euro or a multiple thereof (always to full euros). When issuing young shares in the event of a capital increase , it is forbidden to issue the young shares below the nominal value of the old shares ( under-par issue).

In the case of shares with a nominal value, in the event of a share split or consolidation of shares , all securities issued must be exchanged for shares with the new nominal value. This was a very extensive undertaking, especially in the past, which was one of the reasons why such processes were rather rare. In the meantime, however, most of the shares are only available as global certificates (a physical document certifying, for example, 100,000 shares at 5 euros each), so that in these cases only this document has to be exchanged.

The par value share can look back on a longer history than the no-par share. Already the “Prussian Law on Stock Companies” (PGAG) of November 1843 contained indirectly in § 2 No. 3 PGAG the requirement to show a nominal amount because “the amount ... of the individual shares” had to be stated. This was also mentioned in the ADHGB of May 1861 (Art. 210 Para. 2 No. 4 ADHGB), and the shareholders were also obliged to pay the nominal amount (Art. 222 No. 1 ADHGB). The amendment to stock corporation law of June 1870 brought the minimum nominal amount of 100 members of the Vereinsthaler (Art. 207a ADHGB). In July 1884 there was a minimum face value of 1,000 marks. The Commercial Code (HGB) adhered to this nominal amount in May 1897 with at least 1,000 Reichsmarks (Section 180 HGB), which was also incorporated into the new Stock Corporation Act in January 1937 . The high nominal amount should keep retail investors away from stocks. In August 1949, in the course of the currency reform , the nominal amount was 100 DM. The AktG of September 1965 brought the 50 DM share, in July 1994 it was radically reduced to 5 DM, which made the share splitting almost impossible. The no-par share came onto the stock market through the “Law on the Admission of No-par Shares” of March 25, 1998 . Since January 1999, the minimum par value for par value shares has been one euro.

In § 8 para. 1 AktG stipulates that shares may be issued as either a par value shares or shares. This means that only one type may be selected by the issuing company ("either ... or"). The articles of association stipulate which type is issued in accordance with Section 23 (3) No. 4 AktG. On the other hand, it is possible to issue different nominal amounts per company. The nominal amount (previously) printed on the share certificates denotes the amount of the contribution to the share capital to be made by the shareholder . With today's non- denominated collective custody or the value right , nominal amounts are no longer visible because there are no more share certificates.

The provision of § 9 para. 1 AktG generally prohibits the sub Pari emission , because shares may not be issued for an amount less than the principal amount or amounts attributable to individual share pro rata amount of the share capital.