Limited partnership based on shares 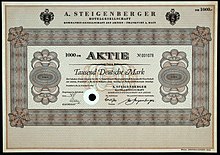 A. Steigenberger Hotelgesellschaft KGaA shares of DM 1000 in December 1954

Although the KGaA has the characteristics of a partnership , it is still a corporation . It is itself an unincorporated entity . The KGaA is a trading company and therefore a merchant within the meaning of the Commercial Code. The KGaA often appears as GmbH & Co. KGaA or AG & Co. KGaA . In these arrangements, no natural person is regularly liable without limitation. If the personally liable partner is a corporation, the legal form is also referred to as corporation & Co. KGaA .

Two different types of shareholders are involved in the KGaA:

As with the AG, the limited partnership capital is at least € 50,000. The stock corporation law regulations on raising and maintaining capital as well as capital measures apply. Personal company law provisions of the Commercial Code apply to the capital contributions of the general partners .

The distribution of responsibilities between general partners and limited partnership shareholders differs significantly from that between the management board and shareholders in the AG:

The general partners have a stronger position than the board of directors in the AG: Their consent is generally required for all extraordinary management measures and basic business, i.e. H. Such measures cannot be carried out against the will of the personally liable partners.

Some of the limited partnership shareholders have more extensive powers (e.g. passing resolutions on the annual financial statements , approval of extraordinary management measures), and some of them have less influence than the shareholders in the AG: They lack the indirect personnel competence for the management because the supervisory board has the Can neither appoint nor remove general partners; Section 84 AktG does not apply. Admission of new personally liable partners and withdrawal of the management or representation authority generally requires the consent of all partners - including the person concerned.

Compared to the AG, the supervisory board lacks further powers: The supervisory body in the KGaA is not entitled to participate in the management; Section 111 (4) sentence 2 AktG does not apply ( co-determination privileges for the KGaA).

Compared to the AG, the Articles of Association offer extensive freedom of design. The rights of consent of the limited partnership shareholders can usually be waived: In addition to the extraordinary management measures, this primarily concerns measures that fall under the so-called Holzmüller doctrine .

In the KGaA - unlike in the AG - control is not linked to the amount of the equity stake. In the AG are z. B. Multiple voting rights are not permitted for individual shareholders. In contrast, the general partners of the KGaA - depending on the form of the articles of association - generally retain power in the company even if they only make a small or no investment of assets. The KGaA is therefore considered to be takeover-resistant, which is why it is particularly suitable for family businesses that want to raise capital on the stock exchange. If the family members remain personally liable partners or majority shareholders in the general partner company ( GmbH , AG, foundation, etc.), they retain control even if more than 50% of the share capital is sold to limited partners who do not belong to the family via the stock exchange.

For family businesses, there are other advantages in addition to resistance to takeovers, in particular in terms of succession planning. In this context, the GmbH & Co. KGaA opens up inheritance tax leeway.

For a long time the practical importance of the KGaA was negligible. There were only a few companies in Germany that chose this legal form. The 1994 statistical yearbook gives their number as 30. However, after the Federal Court of Justice in 1997 affirmed the previously controversial question of whether a corporation may be a personally liable partner of the KGaA, the legal institution of the KGaA experiences an increase in importance; 203 KGaA were already registered in 2001, 317 on September 1, 2017. According to the sales tax statistics of the Federal Statistical Office , the KGaAs in Germany achieved total sales of € 26.4 billion in 2002.

Henkel , Merck , Fresenius and Fresenius Medical Care are examples listed in the DAX for companies that have the legal form of KGaA. The licensed player departments of some Bundesliga clubs are also organized in the form of the KGaA (e.g. Hannover 96 GmbH & Co. KGaA, 1. FC Köln GmbH & Co. KGaA, Borussia Dortmund GmbH & Co. KGaA, Hertha BSC GmbH & Co. KGaA , Greuther Fürth GmbH & Co. KGaA), because the statutes of the League Association privileges the legal form of the KGaA through the required resistance to takeovers. In addition, the owners of German private banks often choose the KGaA as their legal form (e.g. Metzler seel. Sohn & Co. KGaA , Hauck & Aufhäuser KGaA, Sal. Oppenheim jr. & Cie. KGaA) in order to maintain the traditional personal liability of the owners. In fact, this is of little importance for protecting creditors in the corporate crisis; In 1974 the private bank ID Herstatt KGaA went bankrupt despite personal owner liability.

In 2013, there were a total of 116 limited partnerships based on shares in Germany that were subject to VAT.

Legal forms in the Federal Republic of Germany

Legal forms according to German law

legal forms according to EU law