This article deals with the Swiss movement. For the concept of the same name in Austrian constitutional law, see comprehensive national defense . 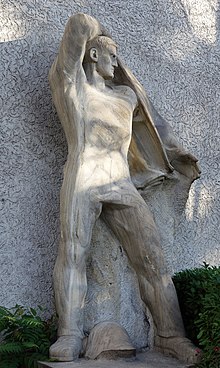 Marble sculpture readiness for military service by Hans Brandenberger 1943–1947, the original in bronze was a symbol of the Landi 1939

The spiritual national defense ( French défense [national] spirituelle ) was a political-cultural movement in Switzerland , which has already been explained, but especially active from around 1932 to the 1960s by the Swiss authorities, special institutions, scholars and the press , but was also borne by cultural workers. The aim of this movement was the cross-party strengthening of values ​​and customs perceived as «Swiss» in order to ward off totalitarian ideologies . At first it was directed primarily against National Socialism and Fascism , and later against Communism during the Cold War . Even when the national intellectual defense was no longer actively pursued by the authorities, the cultural, anti-totalitarian values ​​remained in effect, and Swiss politicians still use the terms and metaphors of national intellectual defense today.

On June 19, 1935, the Social Democratic National Councilor Fritz Hauser submitted a postulate to the Federal Assembly in which he called on the Federal Council to examine how the intellectual independence of culture in Switzerland should be preserved in the face of the threatening National Socialist system in Germany . A week later, the Swiss Writers' Association (SSV) ( Felix Moeschlin , Karl Naef) presented Federal Councilor Philipp Etter with a policy paper on federal cultural policy. The Social Democratic Party of Switzerland (SPS) made its approval of the Federal Council's defense bill subject to the following conditions, among other things: combating all domestic political tendencies that, contrary to the Swiss will of the people, stunted the democratic freedom and self-determination rights of citizens and eliminated the influence of the constitutional authorities strive for the state and its politics . The 1936 SPS Congress in Zurich rejected the military loan. The unconditional recognition of the legitimacy of national defense followed in January 1937 when the SPS joined the guideline movement .

Message from the Federal Council on intellectual national defense

In the dispatch of the Federal Council on the organization and task of Swiss cultural preservation and advertising of December 9, 1938 , an application was made to create the Pro Helvetia cultural foundation, which is organized under private law and subsidized by the federal government . It should guarantee the defense of common spiritual values ​​of Switzerland in order to create a counterweight to the "state-organized propaganda from neighboring states" : Is the armed defense of the country; the preparation and organization of which is exclusively a matter for the state and primarily the task of the country, so we would like the spiritual national defense primarily to the citizen; man; left to the free development of the spirit. The state should provide the necessary funds and reserve the right to monitor their use. Otherwise, however, the spiritual forces of the country should mobilize themselves and place them in the common defense front.

The demand for a "spiritual" defense of Swiss democracy against fascism with what were then modern means such as radio and film came from left circles and was more topical when Hitler took power in Germany in 1933 . This closed the circle around Switzerland, since fascist-authoritarian governments were now in power in all of Switzerland's neighboring countries - except France. In this first phase, the intellectual national defense had a clearly anti-German character, since the Swiss peculiarity should primarily be emphasized against Germany. A special form of spiritual national defense was the so-called Elvetismo in Ticino , where it was about the defense against Italian irredentism - i.e. H. the emphasis on the Ticino character compared to Italy .

The central idea of ​​intellectual national defense was the creation of a " national community " in Switzerland. This meant overcoming class antagonisms and creating a cohesive Swiss identity, a “community of fate ” that included cultural differences and the fact that Switzerland was multilingual. The term “Helvetic totalitarianism” coined by Jost in this regard falls short of the mark, as it only refers to civil spiritual national defense. From 1938 onwards, intellectual defense was officially supported by the Federal Council. In a fundamental text, Federal Councilor Philipp Etter emphasized Switzerland's membership of the three dominant European cultures, cultural diversity, the alliance character of democracy and reverence for human dignity and freedom. Depending on the political sentiment, other ideas were also projected into the movement, such as federalism , the rural character of Switzerland, social justice, religious freedom, etc.

The national exhibition in Zurich in 1939 is considered to be the most effective expression of intellectual national defense. The so-called " country spirit " flowed through Switzerland and, shortly before the outbreak of the Second World War, gave people the feeling of Switzerland's unbroken will for independence against all claims from Germany and the involuntary interrogation of the German part of Switzerland in a Greater German Empire to be created , after Austria and the Sudetenland had already been incorporated into Germany.

The main problem of intellectual national defense was the influence of state-controlled German and Italian propaganda, which had an impact on Switzerland primarily via radio, books and magazines. In order to counteract these influences, both private and state institutions created cultural institutions that carried out “Swiss” propaganda. Specifically, the Pro Helvetia cultural foundation, the New Helvetian Society and the Army and House Section should be mentioned here. Even the Swiss filmmaking was first heavily promoted to the intellectual defense to operate using the cinema. The most important of these films were Leopold Lindtberg's Füsilier Wipf (1938) and Landammann Stauffacher (1941) and Franz Schnyder's Gilberte de Courgenay (1941). During the Second World War , intellectual national defense was also supported by the censorship measures carried out by the press and radio communications department .

After the Second World War the movement remained active and was directed against the feared danger of communist infiltration. In keeping with the anti-communist zeitgeist, the emphasis was now more on the democratic constitutional and welfare state and the militia character of a strong Swiss army. Spiritual national defense increasingly resulted in what critics call a “ bunker mentality ”, political and sometimes also intellectual isolationism and the militarization of civil society.

«The intellectual defense of the country aims to strengthen the intellectual and moral resistance of soldiers and citizens. It means a reflection on the character and value of our democratic state and is intended to consolidate the conviction that we must defend these values ​​against any influence and any external threat.

Intellectual national defense in the troops is part of military training; it takes place within the military order of command. The service army and house is the means of maintaining them. "

Because of the strong criticism from cultural and intellectual circles, the Swiss authorities had to give up the official promotion of intellectual national defense from 1962. Nevertheless, the Swiss army continued to promote the will to defend itself and propagated Switzerland's unconditional dependence on a numerically strong and well-armed Swiss militia army while at the same time maintaining absolute political and economic neutrality.

As recently as 1989, the Federal Council used vocabulary and imagery for the intellectual defense of the country in the voting campaign for the army abolition initiative . The celebrations for the fiftieth anniversary of the mobilization of war in 1989 were in a similar tradition. The so-called “Diamond” celebrations were intended to revive the spirit of the active service generation with a view to upcoming votes on the procurement of new armaments for the army.

Political parties, mainly from the right-wing bourgeois spectrum such as the SVP , are still using the ideas of intellectual national defense in the fight against EU integration or against " foreign infiltration " of Switzerland, for example in the voting campaign on Switzerland's accession to European Economic Area (EEA) 1992 or during the campaign against Switzerland joining the Schengen and Dublin Agreements in 2005. In addition, the cultural values ​​of spiritual national defense from the post-war period live on, for example in social partnership .

“Imagination is also a rather rare gift. Most of our people will not want to think about it in the years to come - no more than 1920, 1930 or even later - whether and how the country could be threatened recently. What we have done, especially since 1933, to shake it up, to appeal to its conscience and its vigilance, will always have to be done anew. "