The Hemmelsdorfer See in Schleswig-Holstein is located north of Lübeck in direct proximity to the Baltic Sea in the area of ​​the municipalities Ratekau and Timmendorfer Strand and used to be a fjord.

Depth profile of the Hemmelsdorfer See

The Hemmelsdorfer See is divided into two completely different basins in the area of ​​the so-called Möveninsel. The larger northern basin is flat with a depth of four meters (four meters below sea level). The smaller southern basin is a large cryptodepression (consequence of an ice age glaciation). In this southern part of the Hemmelsdorfer See, the HafenCity University Hamburg carried out a study with sonar technology (side scan sonar, subbottom sonar and multibeam sonar) on August 31, 2007 in order to determine the lowest point on the mainland in Germany. The deepest point is 39.5 m, it was marked with a buoy.

The lake is largely surrounded by agricultural land. In the bank area there is a narrow forest belt with black alders and various types of willow . Reeds can be found in a strip up to 50 m wide along the entire shoreline . The narrow-leaved cattail ( Typha angutifolia ), the swimming- leaved turf , the yellow pond rose ( Nuphar lutea ) and white water lily ( Nymphaea alba ) and, very rarely, the duckweed Spirodela polyrhiza and Lemna minor and the water knotweed ( Persicaria amphibia ) can be found at various points of the bank . 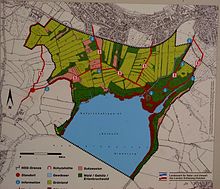 The northern part of the lake and the adjoining Aalbeek lowland were designated a nature reserve " Aalbeek-Niederung " on December 31, 1984 and a European bird sanctuary in 2000 over an area of ​​310 ha .

According to the European Water Framework Directive (WFD), the Hemmelsdorfer See is in an unsatisfactory ecological condition. From the larger tributaries of the Mühlenau, Thuraubek and Spannau and other tributaries, the lake receives heavily to very heavily nutrient-loaded water. The visible consequences in summer are often blue-green algae and foam formation in the bank area. In terms of water quality, the Hemmelsdorfer See is one of the endangered lakes in Schleswig-Holstein.

Mixing of the body of water

In the deep, southern basin of Lake Hemmelsdorf, there is no water exchange between the oxygen-rich surface water and the deep water in summer when surface temperatures are higher. The cold, heavier deep water remains under the layer of warmer, lighter surface water.

Deep standing waters, in which the vertical water circulation does not take place over the entire depth profile, are called meromictic waters . The circulating upper layer is called the mixolimnion (mixing water) and the deep water area is called the monimolimnion . A characteristic separating layer ( metalimnion ) forms between the two layers (see graphic).

The oxygen in the deep water is more or less completely used up through degradation processes and prevents any natural development there.

Different mixing of the water body of lakes of greater depth

For many years it has been said that the former Viking settlement of Reric was located in the upper part of the lake . Many treatises exist, but little evidence has been found.

In the 12th and 13th centuries there was a tower-hill castle on the bank of the northern part of the lake, which is now silted up and which was bordered by a ridge . It was built on the 1.4 m high hill known as the “robber's cave”, which lies on a 6 to 7 m high tongue of the Geest, which slopes steeply there. Today the hill has a diameter of around 20 m. There, erratic blocks probably formed the foundation stones of the fortified aristocratic residence, which was probably Gosevelde Castle, which was mentioned in a document in 1255 .

During the flood of the Baltic Sea in 1872 , a large amount of salt water penetrated the lake from Lübeck Bay, which sank to the bottom of the lake due to its higher specific weight. From the subsequent observation we now know that in such a case the lake would need around 60 years for its desalination, since it was not free of salt until 1935. The natural connection between the lake and the Baltic Sea is the Aalbeek, which is regulated by a weir in the Niendorf harbor . In order to prevent salty Baltic Sea water from entering the Hemmelsdorfer See, it is only opened when the river level is above the Baltic Sea water level.

The Hemmelsdorfer See was supposed to serve Napoleon I as a naval port (see Lübeck French times ). It was extensively measured, the plans are still preserved.

In the Third Reich , the lake was supposed to serve as a submarine harbor, including a flying boat harbor. Four steel wire bollards sunk in the lake are located in the western part of the Flachsee (the northern part of the lake). Neither plan was carried out. 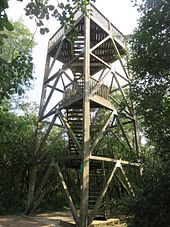 The lake is also a popular ice sailing area , as in January 2016 when the ice was 20 cm thick. 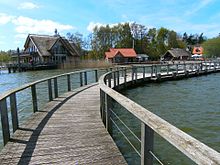 In the district of Hemmelsdorf there is a small harbor for sailing and rowing boats at the fish smokehouse. The Hemmelsdorfer See is leased by the sports fishing club SAV Pliete eV in Lübeck. The fish species are: eel, pike, pikeperch, tench, carp and trout. The removal of the fish is limited.

In 2013, an approx. 0.5 km long riverside path was laid out in the Hemmelsdorf district to allow direct observation of the bank vegetation. The footbridge was built entirely from oak to fit into the landscape. The oak posts on which the footbridge is based were not peeled to maintain their durability. Other piles were prepared differently to watch their decay.

There is a swimming area in Offendorf.

Geographical extreme points of the Federal Republic of Germany