The transmission (from Latin trans “(towards) through” and middle “send”) is a quantity in physics for the permeability of a medium for waves , e.g. B. for sound waves or electromagnetic waves (light etc.). 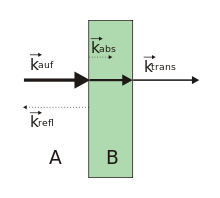 Transmission, reflection and absorption of a wave through a medium B

If a wave that moves in medium  A (e.g. air) hits a medium  B of finite thickness (e.g. a lens or a wall), it becomes partly at the interfaces, depending on the material properties of the obstacle reflected and completely or partially absorbed when passing through . The remainder is transmitted through medium B and exits again on the opposite side of medium B.

The exiting radiation is only determined by the entering radiation if the obstacle does not radiate itself. However, every obstacle radiates according to its temperature ( thermal radiation ). Strictly speaking, the emitted radiation must therefore be calculated using the radiation transport equation. 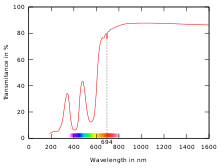 Transmittance Τ (λ) of a 1 cm thick ruby in the optical range.
The narrow absorption band at 694 nm is the wavelength of the ruby laser .

The transmittance or  T , a material property , is defined as the quotient between the wave or sound intensity I behind and the intensity  I 0 in front of the obstacle:

The degree of transmission is thus a measure of the “let through” intensity and assumes values ​​between 0 and 1 or 100%.

(Not to be confused with the degree of transmission is the transmission factor or coefficient , which, like the reflection coefficient, relates to the amplitude instead of the intensity, see Fresnel's formulas .)

The transmittance depends u. a. from:

the following general performance balance can be drawn up:

In acoustics , the degree of transmission describes the ability of a component or a transition between two sound-conducting components or media to transmit sound . However, the sound reduction index is often given here as a counterpart :

In room acoustics , it doesn't matter how the sound energy is lost in a room:

Therefore, in acoustics, the degree of transmission is used as part of the degree of absorption (measure of the absorbed intensity):

This results in the following overall power balance for sound:

In optics , the degree of transmission describes the proportion of the incident radiation flux or luminous flux that completely penetrates a transparent component (see remission ).

In the case of electromagnetic radiation - unlike in acoustics - the overall emission of a body is of interest rather than the direction. In this case, the degree of absorption is a measure of the "lost" intensity:

Therefore, in optics, absorption and transmission are usually treated separately:

The reciprocal value of the degree of transmission, the opacity and its logarithmic formulation, the extinction , are also used as further measures for describing the transmission .