The Fresnel formulas can be derived from Maxwell's equations , using special cases of the boundary conditions of electromagnetic waves at a charge and current-free boundary layer:

Depending on the polarization of the incident wave, there are different boundary conditions for the impact of an electromagnetic wave on an optical interface. Every arbitrarily polarized electromagnetic wave can be represented as a superposition of two linearly polarized waves that oscillate perpendicular to each other. The plane of incidence serves as the reference plane, which is spanned by the wave vector of the incident wave and the surface normal . An incident wave polarized as required can be written as a superposition of a wave polarized parallel (p) and perpendicular (s) to the plane of incidence :

Here is the field vector of the electric field, are the unit vectors for s and p polarization, and the parameters correspond to any phase shift.

Because of the superposition principle, it is sufficient to calculate the amplitude ratios for waves linearly polarized parallel and perpendicular to the plane of incidence.

The direction of polarization (perpendicular or parallel to the plane of incidence) remains unchanged after the reflection.

In the general case, the two media have different permittivity and permeability as well as a complex refractive index

Preview for equations with the angle of refraction eliminated

In general, both the refractive index of the media involved and the angle of incidence and refraction are necessary for calculating the degrees of reflection or transmission using the Fresnel formulas.

The case with the positive sign is used as a solution so that the reflection factor r ≤ 1 later .

With perpendicular polarization, the electrical component forms a right angle with the plane of incidence.

First, consider the component that is linearly polarized perpendicular (index: s) to the plane of incidence. It is also referred to in the literature as the transverse electrical (TE) component.

With the transmission factor and reflection factor . The coefficients relate to the electric field.

With parallel polarization, the electrical component oscillates in the plane of incidence.

Coordinate system for measuring the E-vectors

In the other case, the amplitude of a wave polarized linearly parallel (index: p) in the plane of incidence is considered. It is also referred to in the literature as the transverse magnetic (TM) component. Here the coefficients relate to the magnetic field.

For the special case that is common in practice that the materials involved have approximately the same magnetic permeability ( ), e.g. E.g. for non-magnetic materials, the Fresnel formulas are simplified as follows:

Amplitude ratios , (top) and reflectance / transmittance , (bottom) for the interface between air and glass ( and ). Light incident on the interface from the air side (left) and from the glass side (right).

Another special case arises for ideal dielectrics in which the absorption coefficient of the complex refractive index is zero. This means that the material on both sides of the interface does not absorb the corresponding electromagnetic radiation ( ). The following applies:

By eliminating the complex parts, the Fresnel formulas are simplified as follows:

Hint: The second equals sign results from applying the law of refraction and addition theorems . The assumptions made are not valid for angles of incidence of 0 ° and 90 ° and the formulas can therefore not be used. For this, the original form from pure cosine terms must be used

A further simplification results for the case that the angle of incidence α is equal to 0 (perpendicular incidence):

For example, if visible light falls perpendicularly onto the air / quartz glass interface , then the proportion will be

the incident intensity is reflected independently of the polarization (see section on the relationship with the degree of reflection and transmittance ).

Discussion of the amplitude relationships

Partial reflection and transmission of a one-dimensional wave at a potential step. The proportion of the reflected and transmitted intensity of an electromagnetic wave can be calculated using Fresnel's formulas.

Where the amplitude coefficients are real and negative, enters phase shift from on (with real and positive no phase change):

The amplitude ratio has a zero crossing at Brewster's angle :

Examples: Brewster's angle for air-glass is , and for glass-to-air is .

The amplitude relationships become complex from a certain angle. From this critical angle or critical angle , total reflection occurs. The critical angle corresponds to the angle of refraction so , d. i.e., the wave travels along the interface.

Example: The critical angle for glass-air is .

Relationship with the degree of reflection and transmission 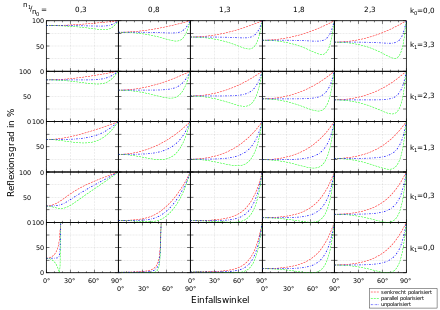 Consider a bundle of rays that is incident on the interface of an isotropic, non-magnetic material of the surface . The beam cross-sections of the incident, reflected and transmitted beam are , and . The energy that flows per unit of time and area through an area whose normal is parallel to the direction of energy flow (in isotropic media the same direction of propagation ) is given by the complex Poynting vector :

The mean energy flux density is obtained by averaging over time and some transformations:

The average energy that is transported by the beam per unit of time (average power that hits the surface ) corresponds to the average energy flux density times the cross-sectional area, i.e.

In general (unpolarized light) the degree of reflection (often also referred to as ρ) is defined as follows:

and as transmittance (often also referred to as τ):

The two values ​​can now be calculated with the help of Fresnel's formulas; they are the product of the corresponding reflection or transmission factor with its conjugate complex value.

For ideal dielectrics that have no absorption and therefore only real-valued refractive indices, the equations simplify to:

with for the s- or p-polarized component.

In addition, the degree of reflection and transmission are linked to one another via the following general energy flow balance at an interface (no absorption, i.e. the degree of absorption is zero):