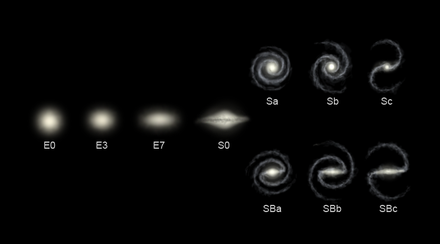 The Hubble sequence is a morphological ordering scheme for galaxies that was developed by Edwin Hubble in 1936 and is still used to a limited extent today.

The individual galaxy types are described in more detail in the article Galaxie .

Hubble saw in this representation a possible evolutionary sequence for galaxies. Research in recent years has shown, however, that the evolution of galaxies is far more complex and cannot be represented by a simple sequence. Nevertheless, one sometimes still calls, actually incorrectly, elliptical galaxies as "early" and spiral galaxies as "late" galaxies.

The main problem with the Hubble sequence is that Hubble only had a very small amount of galaxies available (a few hundred) due to the insufficiently adequate observation technology at the time, all of which are very close (very low redshift ). As a result, this scheme is based on a data set that does not exhaust the diversity of the galaxy morphologies and is therefore not representative of the actual galaxy population . It is therefore said that the original data set and thus the classification scheme based on it show a bias , ie the galaxy types defined by Hubble are not a reliable description.

In addition, the Hubble sequence is “tailored” to the appearance of galaxies in the light visible to the human eye. Galaxy morphologies in other spectral ranges are usually clearly different from this. For example, most galaxies look extremely irregular in the UV or X-ray range , since in this spectral range, almost exclusively irregularly distributed star formation regions are visible. Hubble's classification scheme is therefore not suitable for other wavelength ranges. Again, this is a bias of this classification scheme.

These problems resulted in very limited use of the Hubble sequence nowadays, despite some efforts to extend the scheme, e.g. B. by Gérard-Henri de Vaucouleurs . A major reason why the Hubble sequence is still used is the lack of a more modern and better classification scheme for galaxy morphologies. It is difficult to quantify them reliably. In contrast, there are reliable quantitative descriptions of galaxy spectra , which is why the classification of galaxies based on this has become more important.