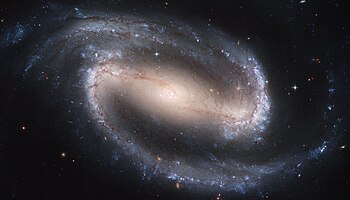 NGC 1300 seen almost from above. Image of the Hubble Space Telescope

A bar spiral galaxy , or bar galaxy for short , is a spiral galaxy with a more or less straight band of bright stars . This “bar” extends from the center of the galaxy to various distances, in some cases almost to the edge. The spiral arms extend from the ends of the beam.

Edwin Hubble classified these types of spiral galaxies as "SB" (English "Spiral Barred") and divided them into three subcategories according to the shape of the bar and the spiral arms:

A fourth category was added later:

The area of ​​the bar represents an active star formation area . Gas , from which the stars form, flows from the spiral arms towards the center of the galaxy.

The bar structure is the result of a density wave that spreads radially from the center of the galaxy and affects the orbits of the inner stars.
The structure may also develop as a result of mutual gravitational perturbations of galaxies.

It is believed that bar spirals are only a temporary stage in the evolution of galaxies. The bar spirals develop into "regular" spiral galaxies over time.