Galaxies are not evenly distributed in space, but occur in clusters in structures that have formed under the influence of gravity since the beginning of the expansion of the universe and are held together by it. Galaxy groups and galaxy clusters form even larger objects, the galaxy superclusters . Galaxies that are not obviously part of a group or cluster are called field galaxies . According to today's conception, all these structures are parts of a large-scale foam-like distribution of clusters and connecting filaments , which are grouped around voids with a low galaxy density. The development of this large-scale structure from small random density fluctuations after the Big Bang and under the influence of gravity is an important topic in cosmology .

Smaller clusters of galaxies with fewer than 50 members in a volume of up to 10 million light years (MLj) in diameter are called groups . Their mass is about 10 13 solar masses; the speeds of its members vary by about 150 km / s. The delimitation to galaxy clusters is not sharply defined. 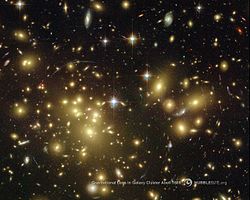 Galaxy clusters have a size of up to a few thousand individual galaxies, all of which move at different speeds in the cluster's common gravitational field. According to the state of research, they are the largest structures in the universe that are gravitationally bound. The mass is around 10 14 to 10 15 solar masses in an area typically 10 to 20 MLj, with velocities that spread around 500–1000 km / s (so-called pecular velocities ). The main part of the mass of the galaxy clusters is made up of dark matter (approx. 80%).

In the dense central regions of galaxy clusters, one usually finds elliptical galaxies , while galaxies at the edge of clusters, galaxies in groups and field galaxies are mostly spiral galaxies .