The title of this article is ambiguous. Further meanings are listed under William Harvey (disambiguation) . 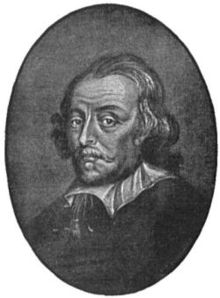 William Harvey (born April 1, 1578 in Folkestone / County Kent , † June 3, 1657 in Roehampton , a district of London ) was an English doctor and anatomist and - with the experimental evidence and the first, 1628 published description of the circulation from blood in the body (of the large circulation of the pioneers of modern, classical -) Humorallehre detaching, physiology . He also devised a theory on the origin of all life from the egg .

William Harvey was born in Folkestone , the eldest of nine children of merchant Thomas Harvey and his wife Joan . He learned in Canterbury at the King's School Latin and Greek, and studied from 1593 at Caius College of Cambridge University . He finished his studies in 1597 with a Bachelor of Arts ( Baccalaureus artium ). From 1599 to 1602 he studied medicine at the University of Padua in Italy, the most prestigious medical faculty of the time. In April 1602 he received his doctorate there as a Doctor medicinae . In Padua, Harvey's most important teacher, the respected surgeon and anatomist Hieronymus Fabricius from Aquapendente , was the first to research the function of the venous valves in more detail, but did not yet understand their meaning, since according to Galen's valid views at the time, blood circulation was unimaginable. Rather, it has been the opinion for 14 centuries that blood is continuously produced in the liver and set in motion by contraction of the arteries .

With these impressions, Harvey returned to England two years later. He opened a practice in London and married Elizabeth Browne, daughter of Queen Elizabeth I's personal physician . In 1607 Harvey became a member of the Royal College of Physicians , in 1608 appointed to the court of King James I , and after his death in 1625 also personal physician of his Successor Charles I , with whom he was friends and who generously supported his research. Harvey had lectured on physiology and anatomy from 1615. As early as 1616, twelve years before the printed publication, he presented his theory of blood movement, which made him famous, as part of these lectures. In 1636 Harvey took part in a delegation to Emperor Ferdinand II in Regensburg, followed by a detour to Italy. After his return to London he ran his practice again.

In 1628 he published his 72-page work Exercitatio Anatomica de Motu Cordis et Sanguinis in Animalibus or De Motu Cordis for short (Anatomical Studies on the Movement of the Heart and Blood), in which he described the blood circulation , which opposed the theory of Galen's blood movement , as he did is known today, described what helped him to gain reputation all over Europe, and on the other hand also earned him harsh criticism from Galen's followers, to whom he responded in 1649 with the publication of his detailed answers. Harvey's theory concerned the great blood circulation (body circulation), for the discovery of which, among other things, the previously published observations of the small blood circulation (pulmonary circulation) by Serveto and Colombo were fundamental. The great mystery of how blood gets from the arteries into the veins was solved with the help of the microscope by the Italian anatomist Marcello Malpighi with his discovery of the capillaries . Only after that, in the last third of the 17th century, did the circulation theory of Harvey, previously derided as "Circulator", prevail. Up until then, Galen was primarily used as the basis for teaching.

One of the key factors behind Harvey's theory of circulation was that he questioned the existence of previously believed pores in the heart septum. Galen had postulated these pores, but could not be proven by Andreas Vesal and were still accepted by him, even if they were invisibly small.

At the age of 79, Harvey died of a stroke . He was buried in Hempstead, a village in the Uttlesford district .

Almost all of his manuscripts were lost either during the Civil War or in the great fire in London (1666).

What set William Harvey apart from many of his research contemporaries was his clear separation of hypotheses and facts . He only accepted the results of his research when they were also confirmed in control tests. He was thus the first to introduce scientific methods in the field of biology and medicine, and can thus be regarded as the founder of modern medicine and physiology. His calculation of the heart's pumping capacity is the first significant application of mathematics to biology . The cardiac output was scientifically examined for the first time at Harvey. However, he did not relate his examinations to today's cardiac output, but - due to the timing devices available to him, which are imprecise from today's perspective - to a half-hourly volume. Harvey's new discoveries also opened the philosophical struggle between vitalists and mechanists , which lasted until roughly the beginning of the 20th century, before it came to an end with the knowledge of cell theory and the discovery of DNA . His work at the Royal College of Physicians was also significant , where he gave lectures, carried out dissections and anatomical demonstrations from 1615, defended his theses on blood circulation from around 1618 and thus faced criticism before his views were published .

The scientific acceptance of his theory of blood circulation and his results on circulatory research led at the end of the 17th century to the first administration of drugs via the veins ( infusion , injection ) and the implementation of blood transfers .

With his work Exercitationes de Generatione Animalium (Exercises on the creation of animals) published in 1651, Harvey made significant contributions to embryology . Harvey was the first to not only describe successive stages of development, but also to take a dynamic approach. In contradiction to the then generally accepted theory of preformations , he showed how the various organs emerge from undifferentiated substance ( epigenesis ). According to Harvey, the process of procreation consisted of the transfer of an immaterial "fertility" of the semen, which in humans primarily manifests itself in the blood, to maternal matter. The embryo then develops autonomously, initially through the intermediate stage “egg” (“omne animal ex ovo”). The organs then emerged from the original drop of blood in a defined order. In the tradition of the Greek philosopher Aristotle , he adopted a form-building principle, which he called a "divine architect ". With these views he was an outsider in his day; The epigenetic approach he advocated, freed from the metaphysical accessories, was not able to prevail against preformism until the early 19th century.

The Harvey Lecture is named after him. The same applies to Harvey Heights on the Brabant Island in Antarctica and the Harvey lunar crater .