When determining the CO with the Swan-Ganz catheter by means of thermodilution, the Stewart- Hamilton equation is used for the calculation (see number 2 below).

Occasionally, attempts are made to favorably influence heart failure by creating an artificial left-right shunt at the atrial level ( e.g. balloon atrioseptostomy ). Because of the formula CO + LRSV = LZV + RLSV, an increase in cardiac output is not to be expected from such measures (as LRSV enlargement). Therefore, such surgical interventions are considered palliative . 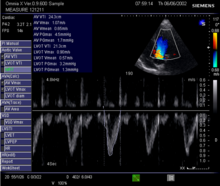 Cardiac output can only be measured indirectly in clinical practice. There are various methods of doing this:

The cardiac output depends on the heart rate, heart rhythm, preload , afterload and contractility of the heart. For practical reasons, the value of the ejection fraction (the percentage of stroke volume in the highest volume of the left ventricle at the end of diastole ) has become more common for assessing the pump function , since it can be read directly from the echocardiography . The cardiac output, on the other hand, is determined in more complex cardiac catheter examinations .

A reduced cardiac output is found with reduced pumping capacity of the left or right ventricle. Heart valve diseases can also reduce cardiac output, as can an underactive thyroid ( hypothyroidism ). The reduction in cardiac output during a heart attack depends on the severity of the infarction.

William Harvey (1578–1657) made the first calculations of the HZV. He determined a stroke volume in humans of only half an ounce (= 18 ml) and thus approximately a cardiac output of 1.15 l / min. In 1870 Adolf Fick determined the HZV using the Fick principle named after him. Numerous alternatives and improvements have then been proposed.

Otto Klein (1891–1968) published a paper on August 1, 1930 in the Münchener Medizinische Wochenschrift on the determination of minute volume according to Fick's principle. To do this, he had to provide his patients at the German University in Prague with a right heart catheter using the method of Werner Forßmann ( first practiced by Werner Forßmann in spring 1929 in a self- experiment) . Otto Klein measured the differences in oxygen concentration between the venous and arterial blood and determined cardiac output in his first three patients in this way (see method number 5 above) of 4.46 l / min, 6.67 l / min and 4 , 20 l / min. However, Klein's superior Wilhelm Nonnenbruch showed no interest in this research. As a Jew , Otto Klein had to emigrate to Buenos Aires in 1938 . But in 1933 he went to Boston to present his method there; here too, however, he only met with rejection. It was only twelve years later in the USA that Cournand and Richards recognized the central importance of this determination of cardiac output.