Laufenburg ( Swiss German : ˈlɑufəˌbʊrɡ ) is a country town and municipality in the Swiss canton of Aargau . The capital of the Laufenburg district is on the Upper Rhine on the border with Germany , in the northeast of the Fricktal region . Laufenburg (Baden) is the twin city on the opposite bank of the Rhine . On January 1, 2010, the neighboring Sulz was incorporated.

The center of the community is the old town located at a bend in the Rhine , which hugs the Schlossberg hill to the south. This 360 meter high, almost circular gneiss dome separates the peninsula on which the old town stands from the otherwise valley floor. Up until the beginning of the 20th century, the river forced its way through a narrow gorge at the narrowest point between the Table Jura and the Black Forest . When the Laufenburg power plant was built , part of the rock was blasted away and the river dammed ten meters high, causing the rapids known as “ Laufen ” to disappear. On the level behind the castle hill, which expands to a width of one kilometer in the south-west, are the new districts of Laufenburg.

The area of ​​the municipality is 1447 hectares , of which 678 hectares are forested and 191 hectares are built over. The highest point is on the summit of the Schinberg, the lowest point at 300  m above sea level. M. on the Rhine. The municipality of Laufenburg is part of the Aargau Jura Park, a “regional nature park of national importance”. Neighboring communities are Mettauertal in the northeast, Gansingen in the east, Mönthal in the southeast, Elfingen and Hornussen in the south, Kaisten in the west and Laufenburg (Baden) in the north on the German side of the Rhine .

Since the Carolingian era, the aristocratic Säckingen monastery owned large estates along the Rhine. The tithe for the monastery was delivered in the area around Laufenburg. Over time, this developed into an important marketplace. The monastery commissioned the Counts of Lenzburg to protect its lands. After their extinction in 1173, the Habsburgs took on this task. Loufenberc was first mentioned in a document in 1207; the place name means "mountain by the waterfall, by the whirlpool, by the rapids".

Count Rudolf II of Habsburg had the settlement expanded into a fortified city. A high cliff on the south side of the river provided enough space for a castle to be built . The Rhine was only twelve meters wide here and overcame a height difference of ten meters. A bridge connected the two halves of the city. The rapids, known as “running”, have been a difficult obstacle for river navigation and rafting for centuries to be passed. A special profession, the Laufenknechte, was responsible for the safe passage of the ships and the tying up of the rafts. The ships were unloaded above the rapids and sent down the river empty, while the goods were carried by carts on this short route.

In 1232 the Habsburgs split into two lines. The Counts of Habsburg-Laufenburg (the younger line) resided in the castle. However, in the 14th century they lost their influence significantly and in 1386 had to sell all their possessions to the older line. As a result, Laufenburg became one of the four forest towns in front of Austria and the capital of the Laufenburg rule. The processing of iron ore from the Jura valleys and the Black Forest played an important role among the branches of industry . The required water was brought here from the Black Forest via a widely branched pipe system.

Tower of the ruins of Laufenburg

During the Old Zurich War, Bern , Basel and Solothurn besieged the city unsuccessfully. After the Waldshut War of 1468, the Habsburgs pledged the entire Fricktal to Burgundy . When the Burgundians were defeated by the Confederates during the Burgundian Wars , Laufenburg came under Austrian rule again in 1477. In 1479, a major fire destroyed more than 130 houses. From the 15th century, the city was the administrative seat (but not part of) the Laufenburg camera rule . In the 17th century there were hardly any longer times of peace. The Rappenkrieg , a peasant uprising, lasted from 1612 to 1614. The Thirty Years War , which also hit the Fricktal between 1633 and 1638, threw the town back in its economic development. Even during the War of the Palatinate Succession (1688–1697), foreign troops moved through the region ( Battle of Rheinfelden ).

In 1797 the Fricktal became a French protectorate after the Peace of Campo Formio . During the Second Coalition War , the front line between the armies of France and Austria ran here and the bridge over the Rhine was destroyed. The Treaty of Lunéville , signed on February 9, 1801, divided Laufenburg in two. The part on the right bank of the Rhine, which is smaller in terms of population, came to the Grand Duchy of Baden , but included around two thirds of the municipal ban. On February 20, 1802, the left bank of Laufenburg became the capital of the district of the same name in the canton of Fricktal , which joined the Helvetic Republic in August ; this part of Laufenburg had become Swiss.

Laufenburg 1896, photochromic print (the gorge and the Laufen rapids are clearly visible)

After the deposition of the governor Sebastian Fahrländer at the end of September 1801, the seat of the cantonal government was relocated to Rheinfelden . With the act of mediation , Napoleon Bonaparte dissolved the canton of Fricktal. Since March 19, 1803, Laufenburg has been the capital of the district of the same name in the canton of Aargau. In 1810 the Capuchin monastery , founded in 1654, was closed. The town could hardly cope with the forced division economically, as the Rhine increasingly lost its role as a transport route. Although the Baden part had already been connected to the railway network in 1856, a railway line was only opened on the Aargau side on August 1, 1892.

The economic upswing began in 1908 when a large hydropower plant was built, the Laufenburg power plant . During the construction period, the population doubled for a short time. By damming the Rhine by ten meters, the characteristic rapids disappeared. When it opened in 1914, the hydroelectric power station was the largest of its kind in Europe. As a result, numerous industrial companies settled there. By 1957 opened substation of the power company Laufenburg , the community developed into a hub in the European electricity grid. 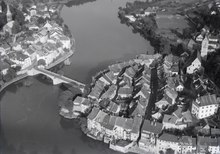 On January 1, 2010 the community of Sulz merged with Laufenburg. The corresponding resolution of the community assembly was confirmed at the ballot box on November 30, 2008, even if the decision was rather tight with 53% yes votes.

In 1985 Laufenburg received the Wakker Prize for the good preservation of the old town architecture .

The Museum Sprachpanorama is the only Swiss museum that specifically exhibits topics related to language (s).

The blazon of the municipal coat of arms reads: "Red lion soaring in yellow." The city's first known seal dates from 1461 and shows an upright lion, the symbol of the Habsburgs. The lion has been depicted in the form used today since at least 1532.

The assembly of those entitled to vote, the municipal assembly , exercises legislative power. The executing authority is the five-member municipal council . He is elected by the people in the majority procedure, his term of office is four years. The parish council leads and represents the parish. To this end, it implements the resolutions of the municipal assembly and the tasks assigned to it by the canton. The District Court of Laufenburg is the first instance responsible for legal disputes . Laufenburg belongs to the Friedensrichterkreis X (Mettau).

According to the corporate structure statistics (STATENT) collected in 2015, Laufenburg has over 2,800 jobs, 4% of them in agriculture, 46% in industry and 50% in the service sector. The community is thus the economic center of the north-eastern Fricktal.

The most important employer is the electricity company Laufenburg , which is active in energy trading across Europe and also operates the hydropower plant. It plays an important role in the international electricity network. In the area of ​​the neighboring municipality of Kaisten, Swissgrid operates a substation in which no fewer than ten high-voltage lines meet (“Star of Laufenburg”). Swissgrid's headquarters were relocated from Laufenburg to Aarau in 2017 . Energiedienst Holding and the construction company Erne Holding are also based in Laufenburg . Viticulture is very important in the Sulz district .

Laufenburg is very well developed in terms of traffic. Hauptstrasse 7 runs through the community between Basel and Winterthur . Kantonsstrasse 462 leads to Frick . The Eiken and Frick connections to the A3 motorway are around seven and eight kilometers away, respectively . The Laufenburg station is next to Frick one of the terminal stations on the S1 line of the S-Bahn Basel to Basel SBB . The eastern section of the Koblenz – Stein-Säckingen railway has been closed to passenger traffic since May 28, 1994. Post bus lines lead to Aarau , Brugg , Döttingen , Ittenthal , Stein-Säckingen and Sulz . On weekends there is a night bus from Frick via Laufenburg to Eiken .

The Laufenbrücke connects the parts of the old town on both sides of the border. About one kilometer east of it is the Hochrheinbrücke , which opened in December 2004 and was built to relieve the old town from through traffic. When it was built, the use of different levels resulted in a difference of 27 centimeters, which was 54 centimeters due to an incorrect correction. The curious incident caused a lot of ridicule internationally in 2003.

The community has four kindergartens and two schoolhouses in which the primary school is taught (one kindergarten and one schoolhouse each in Sulz). The Realschule , the Secondary School and the District School are housed in the Laufenburg School Center Blauen. The closest grammar schools are in Aarau ( old canton school and new canton school ); Due to an intercantonal agreement, young people from parts of the Fricktal can also complete the grammar school in Muttenz ( Canton Basel-Landschaft ) or in Basel .

The Swiss national holiday , August 1st, has been celebrated in the divided city of Laufenburg for many years on the border between Switzerland and Germany. At the Old Rhine Bridge , which connects the two parts of the city, the music and dance groups from both countries perform around the border line. Thousands of visitors are drawn to the cross-border “City Carnival” every year. It has been handed down since the 14th century and is organized by four carnival organizations from the two Laufenburgs.

Commons : Construction of the Laufenbrücke  - collection of pictures, videos and audio files

Political communities in the Laufenburg district

Cities of the Breisgau estates