View of the old Elz from the Elzbrücke, at the entrance to the town center

Kenzingen is a small town in northern Breisgau . It belongs to the district of Emmendingen in the German state of Baden-Württemberg .

The city of Kenzingen is located in the Upper Rhine Plain on the edge of the Black Forest on the Alte Elz, about 30 km north of Freiburg im Breisgau .

The city of Kenzingen consists of the districts of Bombach, Hecklingen, Kenzingen and Nordweil . The spatial boundaries of the districts are identical to those of the formerly independent communities of the same name. The districts also form residential districts within the meaning of the Baden-Württemberg municipal code and, with the exception of the Kenzingen district, localities within the meaning of the Baden-Württemberg municipal code are each set up with their own local council and mayor as its chairman. Local administrative offices called "Ortschaftsverwaltung" have been set up in the villages.
The district of Kenzingen includes the town of Kenzingen, the hamlet of Wonnental, the courtyards Auhof, Hof Mundinger and Kirnhalder (Maier) hof and the residential areas Im Kaisergrün, Kirnhalden, Forsthaus Muckental, Hammerschmiede Muckental and Hof Hepp Muckental. Only the villages of the same name belong to the three other districts. In the district of Kenzingen are the abandoned localities Langenbogen and Altenkenzingen and in the district of Nordweil are the abandoned localities Bramenweiler, Hochstetten (?) And Furnik. 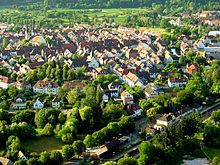 Kenzingen is mentioned for the first time in 772 in the Lorsch Codex :

In God's name I, Eckehart, want to do a good work for the healing of my soul.
It should benefit the holy martyr 'N ( Nazarius ), whose body rests in the Lorsch monastery, which is looked after by the venerable abbot Gundeland. I am giving everything that I have owned so far in pago Brisgowe (in Breisgau), in Kencinger marca (in the Kenzingen district n. Freiburg), namely horse riding, serfs, forests, meadows, vineyards, houses, farm buildings and water resources. Everything should be eternal property. Legally binding manufacturing.
Done in monasterio \ auns \ i (amensi = in the Lorsch monastery) on December 18th in the 5th year (772) of King Charles.

The monastery Lorsch was during this period extensive property in the northern Breisgau.

In the 10th century, the kings Karl the Fat and Otto the Great donated properties in Kenzingen to the Andlau Abbey and the Swiss Abbey of Einsiedeln .

By 1200 at the latest, the place came under the rule of the Lords of Üsenberg , in 1249 Rudolf II von Üsenberg granted Kenzingen town rights . After the Kenzing line of the Üsenberg family died out, the margraves of Hachberg became new local lords in 1354. After the imperial ban was imposed on Margrave Heinrich IV , Kenzingen fell to Austria in 1359 and belonged there to the region of Upper Austria . For a short time the city is a free imperial city ​​from 1415 to 1427 , but then falls back into Habsburg possession. As a result of the Reichsdeputation Hauptschluss , Kenzingen fell to the Grand Duchy of Baden in 1806 .

Bombach was first mentioned in a document in 1144. The village then belonged to the St. Trudbert monastery in the Münstertal. In the 13th century the place fell to the lords of the Kirnburg . Later he came to the House of Habsburg and remained a Habsburg until 1805. On December 1, 1971, Bombach was incorporated into Kenzingen. With around 650 inhabitants, Bombach is the smallest district in Kenzingen. With its wine festival on the 1st weekend in August on the Hummelberg, which has been held since 1978, the place has become known beyond the region.

Hecklingen was first mentioned in a document in 1147, although Celtic tribes were probably already settled here, as the place at the beginning of the Freiburg Bay was conveniently located on old trade routes. After the Roman era, Hecklingen was an Alemannic settlement in the 6th century, as the name shows, which must have been coined during this time. Lichteneck Castle , located above Hecklingen, was built in the 13th century.

The Zähringer were the lords of the place in the 12th century, followed by the Counts of Freiburg and the Lords of Üsenberg. By marriage, the place fell into the possession of the Count Palatine of Tübingen . In 1774 the family of Count Rudolf von Hennin settled in the village, and they also built the palace below the castle. Hecklingen has belonged to the Grand Duchy of Baden since 1805 . On January 1, 1974, Hecklingen was incorporated into Kenzingen.

The first written mention of the place Nordweil took place in 1095. At that time the place belonged to the Alpirsbach monastery and was ruled on site by the Lords of Üsenberg. After the dissolution of the monastery during the Reformation, ownership passed to the Duchy of Württemberg , and since 1805 Nordweil belonged to the Grand Duchy of Baden . On December 1, 1971, Nordweil was incorporated into Kenzingen. 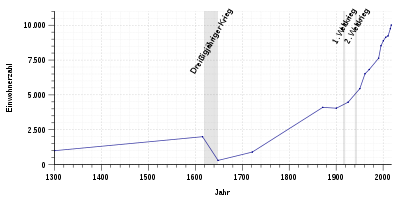 Kenzingen is the seat of the municipal administration association Kenzingen-Herbolzheim, to which, in addition to the cities of Kenzingen and Herbolzheim , the municipalities of Rheinhausen and Weisweil also belong.

The blazon of the city coat of arms reads: "In a split shield under a blue shield head in which a silver flight, in front a silver bar in red, behind in silver two pole-wise turned away blue fish."

The city colors are red-blue.

On July 8, 2007, a partnership between the city in Breisgau and the Croatian city ​​of Vinkovci was sealed in Kenzingen .

Kenzingen has a local court that belongs to the regional court district of Freiburg im Breisgau and the OLG district of Karlsruhe .

Kenzingen is an old school location, an elementary school has been recorded as early as 1300. In addition to the grammar school, there are also three primary schools in Kenzingen (in Kenzingen, Hecklingen and Nordweil).

Despite the destruction in the Thirty Years War , Kenzingen today has a listed old town. To mention is u. a. the Schwabentor, which is also available as a model kit from the Faller company .

The two-tower Catholic parish church of St. Laurentius , the construction of which began when the city was founded in 1249, combines Gothic and Baroque elements. Its furnishings include (at least attributed to these artists) early works by Johann Christian Wentzinger and grave monuments of Christoph von Urach .

From the former Franciscan monastery , built from 1657 to 1662, today's nursing home of the workers' welfare and a simultaneous church emerged. The nave houses the Protestant church Kenzingen and the choir, separated by a wall, the Catholic hospital chapel .

At the beginning of the 19th century, the cemetery was moved from the Laurentiuskirche to Bombacher Straße. The present cemetery chapel, which had a predecessor, was consecrated in 1888.

The Oberrheinische Narrenschau in Alte Schulstrasse 20, the carnival museum of the Association of Oberrheinischer Narrenzunft , shows the customs of the Alemannic carnival , the masks and jesters of the guilds on the Upper Rhine, from Oberkirch in the north to the Upper Rhine in the south.

There are the following larger green areas within the urban area of ​​Kenzingen:

Cities and communities in the district of Emmendingen

Cities of the Breisgau estates