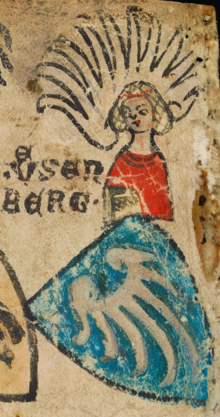 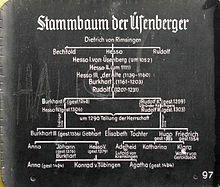 The Üsenbergers , who are also referred to as the Lords of Üsenberg , were an important noble family in the Breisgau and Markgräflerland during the 11th to 14th centuries; they founded several cities such as Kenzingen and Sulzburg .

The Lords of Rimsingen are considered ancestors or a branch of the Üsenberger . Because of the frequent occurrence of the name "Hesso", this is also conceivable for the Hesson family . Dietrich von Rimsingen, who lived in the last quarter of the 10th century, is considered the progenitor of the Üsenberg family and the Counts of Nimburg . The abbot Hesso von Üsenberg, who worked in the 12th century, was probably a scion of the two sexes .

The Üsenberger family belonged to the free nobility, they were vassals of the Bishop of Basel . You had been in office as the upper thigh of the Hochstift Basel since 1052 .

The first ancestral seat of the family was the Üsenburg north of Breisach on the Üsenberg , which was built in the 11th century and destroyed in 1291. Today there are no more traces of the castle and the mountain on which it stood. The area corresponds to the current field name Isenberg , on which an industrial area has been created since 1997 after the withdrawal of the French troops from the Vauban barracks .

After the destruction of this castle, the Üsenbergers exercised their rule from the Höhingen castle on the Schlossberg near Achkarren in the Kaiserstuhl . The castle was first mentioned in a document in 1259. Among the possessions of the noble family that belonged Castle Eichstetten , the Kirn castle , the castle Neuershausen , the Castle bars , the Castle Sulzburg and the castle Weisweil .

The town of Kenzingen was founded in 1249 by Rudolf II von Üsenberg next to the village of Kenzingen on the open field. A fountain in the town center has been in memory of the town's founder since 1824. This period can be seen as the height of the power of sex. It is also noticeable that they did not build a castle, but founded a fortified city, which, due to the larger population, had both a higher defense value and higher tax revenues.

The founding of the Wonnental women's monastery by Rudolf II von Üsenberg is also to be seen in connection with the founding of the city . It is first mentioned in a document in 1242. It is the home monastery and the family burial place . Originally a Dominican monastery , it was a Cistercian monastery from 1262 . After a checkered history, it was secularized in 1806 and fell to Baden . The buildings were then used by a beet and chicory factory, which is how industrialization in Kenzingen began. The Kirnburg can be seen as the third element of the center of power for the Lords of Üsenberg.

At the end of the 13th century, 1291/92, the rule of Üsenberg was divided into a lower and an upper rule , which must be considered independently of each other, after Hesso IV and Rudolf III. had ruled together. One of the prerequisites for the division were the urban elevations of Sulzburg around 1283 and Endingen am Kaiserstuhl around 1285/86.

After the division into the Upper Rule - the Endinger Line, starting with Burkhart II - and the Lower Rule - the Kenzinger Line, founded by Rudolf II - the decline of the family began relatively soon. The Kenzinger line no longer recovered from the consequences of the Battle of Göllheim in 1298, in the run-up to which the Pflixburg was pledged to the Üsenberger by King Adolf von Nassau . In 1352 the last male offspring of the Kenzingen line sold the city of Kenzingen to his brother-in-law Heinrich IV of Baden-Hachberg - a bad deal for Heinrich, since Friedrich had the city as a fiefdom from the Habsburgs and in 1365 they enforced their claims to Kenzingen in court. The line ends with the death of Friedrich von Üsenberg in 1354.

The Endinger line was defeated in the " Kaiserstuhl War " from 1320 to 1322 by the Lords of Falkenstein in the fight for the Bickensohl Bailiwick and the associated claims for damages. In addition, in 1336 Höhingen Castle, Eichstetten and Riegel Castle and Village were pledged by the Margrave of Hachberg, Heinrich IV. After the Freiburg War , Endingen fell to the Habsburgs . Hesso V. von Üsenberg was the last of the line; he died in 1379.

In blue, two silver wings pushed one inside the other and with the wings turned downwards. Later a golden clover stem was added. In this form, the Üsenberg coat of arms was also included in the coat of arms of the Grand Duchy of Baden , where it appears in the fifth field of the coat of arms shield and symbolizes the rule of Üsenberg as part of Baden.

The Üsenberg wing is also featured in a number of local coats of arms.