Coat of arms of the Tübingen

The Count Palatine of Tübingen were a Swabian noble family who descended from the Counts of Nagold . They acquired extensive property and were particularly good at founding monasteries. The fragmentation into individual branch lines, an elaborate court keeping and generous donations to the monasteries they founded led to the economic decline of the family. The branches of the Counts of Tübingen-Lichteneck (until 1664) and the Counts of Montfort in Tettnang (1779) had the longest existence .

Nagold and Hohennagold Castle (around 1650)

Anselm von Nagoldgau (around 966) is the oldest documented Nagoldgau Count, to whose county the village of Kuppingen belonged in 966. This was followed by an Anselm von Nagoldgau (the younger) , which occurs in the years 1027 and 1048. Between the two Anselmen, who are the only known counts named after Nagoldgau, a Count Hugo I von Nagold appears, probably from the same family, in 1007 with the town of Holzgerlingen assigned to his Gau Glehuntare , and opens the series of those since the last quarter Hugos, Counts and Count Palatine of Tübingen, who became more common in the 11th century.

Tübingen was first mentioned in a document in 1078 in connection with the unsuccessful siege of the “castrum Twingia” by Heinrich IV in connection with the investiture controversy, although he did not succeed in conquering the castle. Hugo III but had to submit to Henry IV the following year. Hugo III and his brother founded the Blaubeuren monastery together .

Hugo V. (1125–1152) was called Hugo I , Count Palatine of Tübingen, from 1146 onwards . Presumably, this increase in rank was based on services that he gave the Staufer Konrad III elected king in 1138 . had done. The dignity of the palatine count was no longer associated with the original task of looking after a royal palace, but meant a kind of control function and representation of the king within the tribal duchies and thus also the second position after the duke within the duchy. Associated with this was an increase in rank over other counts of the duchy and the right to exercise the office of judge in lieu of king. This went hand in hand with hunting, customs and coinage law , as the Tübinger Pfennig , which has been in use since 1185, shows.

Count Palatine Hugo II (1153–1182) married the heiress Elisabeth von Bregenz . He inherited Bregenz and other properties in Churrätien , Tettnang and Sigmaringen . In 1171 he founded the Marchtal monastery . His second son Hugo (-1230) established as Hugo I. the new independent line Montfort . The house of Montfort took over the Palatine coat of arms with changed coat of arms colors.

Count Palatine Hugos II. First son, Rudolf I , founded the Bebenhausen monastery around 1183 . He married Mechthild , the Countess of Gleiberg and heiress of Gießen . Her first son Rudolf II (1224–1247) received rule over Horb, Herrenberg and Tübingen after his father's death. The second son, Wilhelm , founded the Asperg-Gießen-Böblinger line.

Rudolf II's son was called Rudolf III at a young age . von Tübingen and later founded the Herrenberg Line as Rudolf I. der Scheerer , named (after Scheer an der Donau).

Gießen , which came to the House of Tübingen from the county of Gleiberg through the marriage of Rudolf I in 1181 , was sold to the Landgraves of Hesse in 1264 .

The individual lines gradually died out: Horb until 1293, Asperg after 1357, Böblingen until 1377, Herrenberg until 1667. The goods were mainly sold to Württemberg (Tübingen 1342) or donated to the Bebenhausen monastery . 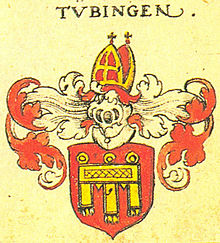 The Tübingen coat of arms always shows the same picture in different colors (especially the color of the rings and fringes usually adapts to the flag):

Seal of the Tübingen Count Palatine

Count Palatine of Tübingen on David Wolleber's descendant table from 1591

Ludwig Uhland set a literary monument to the decay of this once mighty ducal house with his poem “The Last Palatine”.

I, Count Palatine Götz of Tübingen,
Sell ​​castle and town
With people, Gülten, field and forest:
I'm fed up with debt.

I just don't sell two rights
Two rights, good and old:
One in the monastery, with a neat tower,
And one in the green forest.

At the monastery we gave each other poor
And built us to the ground:
For that the abbot has to feed me
The hawk and the dog.

Around the monastery in the beautiful book,
There I have the jealousy:
If I keep that, I don't feel like that
Sorry for all of my other things.

And hear you little monks one day
No longer my hunter's horn,
Then pull the bell, find me!
I'm lying on the shady Born.

Bury me under a wide oak
In the green Vogelsang
And read me a hunter's mess
It doesn't take too long.

Around 1304, Count Palatine Gottfried I was heavily indebted to the Bebenhausen monastery. He gave the monastery extensive rights in the city. Böblingen and Calw were also transferred.

In 1311 King Heinrich VII had placed the Württemberg Count Eberhard the Illustrious under imperial ban. Count Palatine Gottfried I (Götz) was placed as field captain of the federal army against Eberhard, probably because, in contrast to the infantry of Esslingen's imperial city, he was also able to provide cavalry. After Eberhard's defeat in the course of the siege of the Württemberg ancestral castle on the Wirtemberg , Götz was able to collect the evacuated imperial army and inflict a defeat on Eberhard on May 22, 1311, combined with the destruction of the ancestral castle. In thanks, the city of Esslingen took over Gottfried's debt in Bebenhausen and redeemed the cities for him again.

But already his sons and then his grandson Gottfried III. were already so in debt that this time a contract with the city of Tübingen to take over the debts with Count Ulrich von Württemberg , Eberhard's son, as a “comforter” ( guarantor ) was concluded. For a period of 9 years, the city was given wide-ranging powers, such as the free choice of officials and the distribution of its tax revenues. 1342 Götz III arrives. in dispute with Ulrich von Württemberg. In the dispute between Ludwig the Bavarian and the Luxembourgers, the Count Palatine is probably on the wrong side this time. At the instigation of Emperor Ludwig of Bavaria, he has to give Ulrich full satisfaction. He could only free himself from this predicament by selling. On December 5, 1342, he sold Tübingen for 20,000 gold hellers. He only reserved the following two rights:

1. the dog clutch in Bebenhausen (the monks had to entertain him with hunting dogs and provide them if necessary) and
2. his hunting rights in the Schönbuch.

But as early as 1344 the debt burden was so high that he had to sell both rights and the city of Böblingen to Count Ulrich and Eberhard von Württemberg. But he got it back, in care. Likewise, he, or better said his wife Clara von Freiburg, was forced to pay her uncle, Count Egon von Freiburg, 1000 Marks of silver after the death of her father, Count Friedrich von Freiburg on November 9, 1356, all claims to the rule of Freiburg in 1365 for sale. A fiefdom of the German kings had become a Württemberg fief.

Johann Georg , also known as Hansjörg or "Captain" Tübinger, was the last male descendant of the Palatine family. During the Thirty Years' War he served his duke as castle commandant .