from Wikipedia, the free encyclopedia
This is the spotted version , flagged on July 9, 2020 . There are 2 pending changes that have yet to be viewed.

Elzach is a town in the district of Emmendingen in Baden-Württemberg , approximately 26 kilometers northeast of Freiburg .

The city is located on the eastern edge of the Emmendingen district , where it borders on the Ortenau district and the Schwarzwald-Baar district . Topographically , the municipality is characterized by its location in the Elz valley around the Rohrhardsberg local mountain . It belongs to the Breisgau and is located on the edge of the Southern Black Forest Nature Park .

Elzach was first mentioned in a document on August 5, 1178. From the 13th century it was under the control of the Lords of Schwarzenberg , who granted it city ​​rights around 1290 . From the end of the 14th century, the Schwarzenberg rule was viewed as a fiefdom of the Habsburgs . In 1465 it passed to the von Rechberg family , later to the von Ehingen (1546) and von Reischach (1560) families , with the new masters mostly taking up residence in the Elzach City Palace . In 1567 Archduke Ferdinand of Austria bought the indebted Schwarzenberg estate for 28,000 guilders. The Habsburgs continued to give the rule as a fief to the von Fischer and von Greuth. From 1742 to 1805 the barons of Wittenbach had the fief. The respective noble families belonged to the Breisgau estates and the rulership was part of Upper Austria , which belonged to the Austrian Empire . From 1803 to 1806 Elzach was part of the short-lived Duchy of Modena-Breisgau . In 1806, the town with the Breisgau in Upper Austria came to the Electorate of Baden , which soon after became the Grand Duchy of Baden . From 1813 to 1819 it was the seat of a Baden district office .

Yach (about 1000 inhabitants) is located at the foot of the Rohrhardsberg, in a side valley of the upper Elz valley. In Yach there is the Siebenfelsen , a meter-high stone structure that apparently consists of seven stones lying on top of each other. Its origin is unclear.

Yach is the only place in Germany whose name begins with the letter "Y". The inhabitants of the Elz Valley pronounce the name like "Ëich". A name relationship therefore presumably exists with the Eyachtal in the northern Black Forest.

→ for the history see also the article Prechtal
Prechtal With approx. 2000 inhabitants, Prechtal is the most populous place after the core town of Elzach. Prechtal's name originates from the “broken” river course of the Elz, which makes a bend in the former Oberprechtal district. Prechtal is characterized by a dense network of clubs. There are various clubs for sport and leisure, whereby the RVC Prechtal particularly distinguished itself by participating in national championships in the youth field, as well as a team in the 2nd Bundesliga or a year in the 1st Bundesliga in club cycling.

In popular parlance, Prechtal is pronounced "splendid", hence the saying goes: "In splendor everything is right."

→ for the history see also the article Prechtal dominion

Church of the Coronation of Mary in Oberprechtal

Oberprechtal has around 1070 inhabitants. Since the beginning of the 10th century, almost the entire Elztal has belonged to the Waldkirch Monastery , a foundation of the Alemanni Duke Burchard II. In a letter of protection, Pope Alexander III. exhibited for the St. Margarethen Monastery in Waldkirch in 1178, the Prechtal is first mentioned as the Meiertum "Bregen".

In other documents from the Middle Ages, the place appears under the names Gebrech, Brech, Brecht and Precht. The name cannot be explained exactly, but probably comes from the fact that the Elz , which initially flows north, is clearly broken in today's Oberprechtal and the river now continues in a south-westerly direction.

The name Kozzenmuos appears for the first time in 1341 . There was likely mining in the area. Pingen and old mining dumps are evidence of this . In the 16th century the place was called Kotzenmoss . Until the municipality reform on January 1st 1974 Katzenmoos was an independent municipality.

The great-grandfather of the Archbishop of Freiburg, Stephan Burger, comes from Katzenmoos, but left the place in 1896.

The blazon of the Elzach coat of arms reads: “In a split shield in front in green St. Nicholas in a silver robe with a red, silver-bordered miter, the silver crook in his right hand, a red book with three golden balls lying on it in his left, behind in silver a floating black three-mountain. "

For the first time, the city and church patron Saint Nicholas is used on a city seal hanging on a document from 1315. The black Dreiberg in the coat of arms can be traced back to the Schwarzenberg rule. Based on the seal from 1315, the General State Archives produced a coat of arms for Elzach in 1895. A short time later, however, it turned out that the seal, no matter how carefully it was engraved and how clean it was kept, could never provide clear impressions because the coat of arms was too overloaded and therefore did not allow an exact engraving.

Elzach maintains a city ​​partnership with the following cities :

Even today trade and industry are lively. In addition to butchers , bakeries , carpenters , service businesses and numerous retail outlets , there are still professions here that are no longer available in other cities and communities , such as linen weaving , turnery and rope making . The town mill has existed since 1606. 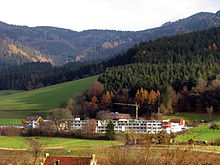 The city Elzach is 750 hectares of the largest forest owner of the community , in the nature of the wood processing of the saw mills to wood carvers is widely represented. Gemstone cutting , slaughterhouses and textile trades can be found as well as goldsmiths , glass and metal processing .

In Elzach - as in the entire Elztal - the textile industry was of historical importance, although nothing has existed for a few years.

In the service sector, the clinics deserve special mention. The city of Elzach has a leading rehabilitation clinic for neurology in Germany , the BDH-Klinik Elzach with a wide range of services.

Elzach and the Oberprechtal district have the rating climatic health resort , which has brought lively tourism to the community .

The terminus of the Elztalbahn ( Freiburg - Denzlingen - Waldkirch - Elzach) is in Elzach . The Breisgau S-Bahn runs on the route today .

The folk costume of the Prechtal

Today the local history museum is located in the old town hall.

A lively club life can be observed in Elzach. Particularly noteworthy is the well-known, traditional Elzacher Fasnet with its main character, Elzacher Schuttig. In addition to the fools 'guilds from Rottweil , Oberndorf and Überlingen , the Elzach fools' guild belongs to the so-called four - league .

The Schuttig is a representation of the wild man. Typical of him are the Saublodere (= pig's bladders), the tricorn headed with snail shells, as well as the tough, malicious appearance of the figure.

Cities and communities in the district of Emmendingen