SWI swissinfo.ch is produced in this SRG SSR building on Giacomettistrasse in Bern

Development of the company

SWI swissinfo.ch emerged from Schweizer Radio International (SRI) or Radio Schweiz International , a corporate unit of the Swiss Broadcasting Corporation SRG (now SRG SSR ) for foreign countries. It was founded in 1935 and was tasked with informing the Swiss abroad about events in Switzerland and promoting Switzerland's presence abroad. Originally, radio programs were broadcast over shortwave and later over satellites. In 1999, the first version was published on the Internet swissinfo.org . In 2001, the service was renamed swissinfo / SRI and at the end of October 2004, after the radio programs had been discontinued as a result of austerity measures by the federal government, it was renamed swissinfo .

When the website went into operation in 1999, the service was activated in German, French, English and Portuguese. A year later, the pages in Japanese, Italian and Spanish followed, on February 1, 2001 those in Arabic and in September of the same year the page in Chinese. Russian followed in 2013 as the tenth language, now on swissinfo.ch .

On March 21, 2005, the SRG Board of Directors decided to massively reduce swissinfo . According to his ideas, only a reduced offer should be produced in English in the future and the service should be integrated with Schweizer Radio DRS (now SRG SSR). Only specific information for the Swiss abroad should be produced in the national languages. A journalist would have been responsible for this offer, which would have been produced in a corporate unit of SRF. The decision sparked critical reactions from the readers, and the Foreign Affairs Commission of the National Council also spoke out against it. The supervisory authority, the Federal Office of Communications (OFCOM) and the Federal Council subsequently decided in the summer of 2007 to give swissinfo a new service mandate with a further nine language editors. On January 23, 2014, the service was renamed SWI swissinfo.ch . 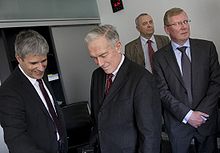 In terms of content, the focus is on information on current topics and events in Switzerland in the form of text, images, audio and video contributions. Independent and in-depth information from the areas of politics, business, culture, science, education and society have first priority. The editorial offer exists in ten languages ​​(German, French, Italian, English, Spanish, Portuguese, Arabic, Chinese, Japanese, since January 17, 2013 - after a pilot test from March to October 2009 on the occasion of the Ice Hockey World Championships in May 2009 and the state visit of the then Russian President Dmitry Medvedev at the end of September 2009 - also in Russian), and international networking has been promoted via blogs since 2007 .

In addition, dossiers, long-form reports and multimedia additions to current topics are offered. Information broadcasts on Swiss radio and television can also be accessed at SWI swissinfo.ch . There is a special section for the Swiss Abroad, “swissinfo for the Swiss Abroad”, which is supplemented by an Instagram channel with the hashtag #WeAreSwissAbroad. SWI swissinfo.ch aims to provide the Swiss abroad with balanced information about upcoming votes and elections. With the “Direct Democracy” section, SWI swissinfo.ch also conveys Switzerland's democratic values.

The information can also be obtained from a mobile phone. The headline service automatically updates the headlines of the front pages on a computer. They can also be posted directly to other Internet sites via a news feed . A weekly free newsletter has been sent out since April 2016, containing the most interesting articles. A detailed collection of links on Switzerland is also available on the website. In March 2017, SWI swissinfo.ch launched a new app for iPhones and Android smartphones.