The still unsplit running with the red Fluh, color photograph from 1910

Both Laufenburg with walking, photochromic print , 1896

Henri-Charles Plaut : View through the gorge to Laufenburg, 1859

The Kleine Laufen near Laufenburg was a rapids in the Upper Rhine below the Laufen bridge between the cities of Laufenburg (Switzerland) and Laufenburg (Germany). The cataract was named Kleiner Laufen to distinguish it from the Grosser Laufen ( Rhine Falls ) and the Middle Laufen ( Laufen near Ettikon ). Between 1908 and 1912 the Kleine Laufen was blown up to improve navigability and to build power stations.

Until the Laufenburg power station was built in 1908, the rapids near Laufenburg were the most impressive rapids on the Upper Rhine after the Rhine Falls. The river bed was narrowed between the rocks to a width of 12 to 13 meters, which practically called for a bridge in the form of the Laufen Bridge .

Running means «waterfall, whirlpool, rapids». Due to the rare natural formations, many individual rocks, eddies, whirlpools and other peculiarities have their own names. The prismatic Rote Fluh rock , on which many rafts crashed , was found in the river bed . In 1851 a large raft tore off part of the rock. There was also the Laufenfelsen , which could only be seen at low tide, and until 1856 the Oftringerfels , on which the Oftringen ruins once stood. The name Lachsloch referred to salmon fishing . Each of the permanently installed salmon scales had its own name, inspired by the location, for example: Bey der Schnelle , der Horusen , in der Höll , die Todten Waag or im Treibe Wägle . Die Todten Waag stood at the vortex of the same name, which held all washed up material and also drowned people in the vortex until the next high or low tide. This gave rise to the legend that the souls of the drowned would only be redeemed when they were released. Down the river lay the gorge , a narrow area lined on both sides with sharp-edged gneiss rocks, which could damming the water masses up to 17 m high during floods. At low tide one could cross the place with bars.

The rapids formed during and after the Riss ice age , while the former, wide river bed was filled with gravel. During the subsequent deepening phase, the course of the Rhine was fixed quite far to the north, above a foothill of the southern Black Forest basement . The Rhine ate its way epigenetically into its hard gneiss , criss-crossed by aplit passages . The rock formations have been thoroughly explored because of the power plant construction.

Before the damming, the water level in the cliff fluctuated considerably (up to 13 m). In particular, the Aare , which flows a few kilometers above the Rhine and which here surpasses the water flow , brings in a lot of water when the snow melts.

Fishing, rafting and transportation of goods

→ Main article : Navigation on the Upper Rhine  and Rafting

The Laufen formed a natural fish ladder , which was climbed every year by the Atlantic salmon , called Rheinsalm . The salmon , up to 1.10 m tall , were usually caught with fishing gallows and were the main source of income for the Laufenburg fishing guild. But other fish were also caught, including European sturgeon .

While rafts could be broken up and the trunks drifting through individually, all goods that were transported on the Rhine had to be reloaded. This meant additional income from transportation and road tolls.

Illustrations in history and in art 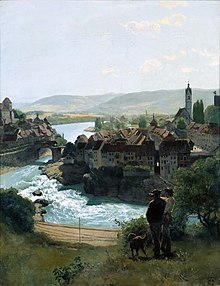 There have been images of running since the Middle Ages, chronicles and historical works depict it. Later, many artists were taken with the natural scenery, such as William Turner , Hans Thoma , Wilhelm Friedrich Gmelin , Gustav Schönleber , Johann Rudolf Rahn , Louis Achille Saugy (1863–1931) or Myles Birket Foster .

The later photographic documents also include those of the photographer Hermann Walter , which he made in 1900 at the suggestion of the geologist Albert Heim .

In 1793 the Englishman George Samuel Browne and his friend had an accident while trying to drive a Weidling on the Laufen .