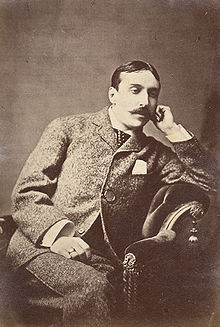 Eça de Queiroz studied law at the University of Coimbra from 1861 to 1866 ; towards the end of this period his first literary works appeared in the Gazeta de Portugal . In 1867 he established himself as a lawyer in Lisbon . On the occasion of the opening of the Suez Canal , he traveled to the Middle East in 1869. From 1870 he held an administrative office; In 1872 he switched to the diplomatic service and represented Portugal as consul in Havana , Newcastle (from 1874), Bristol (from 1878) and Paris (from 1888).

Eça de Queiroz took on influences from romanticism , realism and naturalism ; he admired French literature , especially Honoré de Balzac and Gustave Flaubert . Early on, critics pinned him the label of a "Portuguese Zola ". Eça de Queiroz developed a light, ironic, urban narrative tone; his style is characterized by short sentences, in complete contrast to the rhetorical tradition of Portuguese literature. His social criticism is directed at the hereditary, monetary and official nobility, from which he himself comes, and especially the clergy ; the most important means of his criticism is a sometimes sarcastic humor. Several of his works describe main characters who, despite the best conditions, fail to make something of their lives.

With his novel O primo Basílio (German: Vetter Basilio ) he achieved world fame; The story of the young Luísa is one of the great love and seduction novels of the 19th century and is literarily on an equal footing with Theodor Fontane's Effi Briest , Gustave Flaubert's Madame Bovary , Tolstoy's Anna Karenina or Clarins La Regenta (German: The President ).